ryanosaur said:
Right now, mainly just the simple stuff. What is your design goal and target performance metric. What are the basics of the drivers... you know, a little more of a tease to go with the cool photo! You should save some secrets for the big reveal when it's ready to go.
I only stumbled on the ASR thread by chance just the other day and haven't had a chance to dig into it yet... ASR isn't home to me the way AH is.
Click to expand...

Design goals are somewhat similar to the SBS.1, but turned up to eleven (12" midbass driver), and this time a 3-way since the 12" has enough power on its own. And it will also to my knowledge be the first dual cardioid hifi speaker unless someone beats us to it. Both the coax (midrange) and the midbass driver are in individual, cardioid loaded chambers, which makes for a more efficient system than when a single driver have to cover multiple octaves. So it will reduce the energy to the sides and rear, reducing reflections and room interactions. It sounds amazing. And again no deep bass, so it's essentially a 4-way system when you count the subwoofer.

Sigberg Audio said:
Design goals are somewhat similar to the SBS.1, but turned up to eleven (12" midbass driver), and this time a 3-way since the 12" has enough power on its own. And it will also to my knowledge be the first dual cardioid hifi speaker unless someone beats us to it. Both the coax (midrange) and the midbass driver are in individual, cardioid loaded chambers, which makes for a more efficient system than when a single driver have to cover multiple octaves. So it will reduce the energy to the sides and rear, reducing reflections and room interactions. It sounds amazing. And again no deep bass, so it's essentially a 4-way system when you count the subwoofer.

Very cool. Thank you for the added info!

ryanosaur said:
How do you value R&D? Building and testing Prototypes. How many Drivers may have passed through their hands in the process of choosing what to use? Turning on the lights in their shop?

In the DIY world, I see a lot of people looking for the best buy for their dollar; always hoping to find $20 drivers that will do the job of $100 drivers. In fact, $100 Drivers are generally regarded as Premium Drivers.
The art, of course, is in the integration you achieve. But that is selling Skill and Technique short.
What else happens in the DIY world? People don't account for internal wiring, screws, glue, saw blades and router bits, clamps, damping material, sandpaper, paint, soldering irons and solder, the cost of XO components when used instead of a DSP Amp...

Anyway, let's not forget the need of a business... any business venture... to turn a profit... hopefully.

Finding the right recipe to build a successful Speaker Design does not happen overnight, nor does turning a profit.

Where does the balance point occur?

People complain about the cost of JTR Speakers. Why? He's selling you 2 pair of Coaxial Compression Drivers that retail near $1000 each, and your getting 4 Large Woofers as part of the package, along with everything else. Jeff has to pay a guy to build his cabinets, who in turn has to pay a crew to do the labor, sharpen tools, replace tools, pay their overhead...

Just as Sigberg has to do.

Questioning the end cost to consumer based on the retail price of 4 Drivers and two Amps is far and away one of the most foolish things I've seen done. And it's not just here where this happens. I've seen people try to pick apart the pricing for BMR Monitors and Towers AND so much more!
There simply isn't anything productive to be gained in these endeavors.

If Sigberg was trying to save money, perhaps they could order finished cabinets from the same company Sonus Faber does in China. Not all of their cabinets come from there, but some do. Maybe he could get ICE amps instead of Hypex to make these more affordable, and use the same crappy Celestion Drivers you find in the Volt 6 that measured like @$$ on Erin's bench.

The thing I'm seeing, in the bigger picture, is a business that is trying to break into a notoriously difficult field, and do it in style. Everytime something new comes along, there's a crew of detractors complaining about Perlisten and Buchardt and Arendal and Dutch & Dutch and so forth and so on.
But B&W, KEF or Focal can charge $15-25K for Speakers and people are saying, "Cool. I wish I could buy that," and leave it at that.
*shrugs

All I'm trying to point out is that there is a lot of misplaced energy taking time to complain about the premier design... their first Speaker... being offered by a new company which has two Subs and this SBS.1 available while working on a second design. Rather than Support a new effort and design concept and the potential it may bring, the pricing and shipping policies get questioned and criticized.

There's a reason why included Review Threads in the Drinking Game... And this is a perfect example.

I've been joking about this for far, far too long. It started up as an idea in my head after AH was inundated with people buying lower-tier B&W Speakers and coming on the Forum to find out why they sounded like @$$ once they set them up in their home. :) After that, there were... other topics of...

Edit: I just want to be clear, this is not addressed at any single post or AH Member.
Click to expand...

I'm not saying that you're wrong here, but the opposite logic is accepted very quickly - I mean, any biz would say we have to raise prices due to increased components costs and no one blinks. The cost of components is an inseparable part of any product pricing. However, of course it's far from the only ingredient. I never said anything otherwise. If anything @shadyJ comment ". I wouldn't think that those carbon weave drivers are on the same level as the Sica drivers " - Judging drivers' performance based on diaphragms material alone seems silly to me. $100 (ballpark) for each of Sica drivers is probably a fine choice for this design based on goals. Who am I to judge?
Again James's another remark here: "The SBS.1 is more like a hi-fi no-expenses-spared speaker."
I think I've proven my point that while Sica are great drivers(I'll take Sigberg's word on it), I doubt they fall into last category mentioned.

Again, my remarks shouldn't be taken directly to the value or performance of these fine speakers. I'm sure the well-executed design of the SBS.1 speaker is greater than the sum of its parts, regardless if some of these are top or middle-shelf parts.

Giving new company a slack due their being new? That's very commendable, but alas not very realistic.
Here's SVS Sound page from 2005 (they were founded few years before that and I cant find an earlier version in Internet archive)
At the time they had products ranging from $430 to $2300+shipping, mostly made in usa.

My final point: Everyone has their own opinion, and I think my own opinion is reasonably apparent. Clearly these aren't priced for budget minded folks and I will leave this thread alone as my point ran it's course.
Last edited: May 6, 2022
S

Sigberg Audio said:
What part of the forum would I put that, typically?
Click to expand...

I am sure the Loudspeakers area is fine for that.

On a different note, both the "dip" in the 2-4khz area and the "midbass hump" 150-400hz area was mentioned in the live stream the other day, among others Erin asked about it in the chat, referring to a 3-5dB bump compared to the midrange/highs. I misunderstood his question at first during the live stream, and it also wasn't a good medium to explain at length. So here goes!

At first I want to repeat the fact that the 15 degrees angle has been the focus with regards to smoothness, and is the angle that most will be listening to. The total difference of the average level in 150-400hz area and the dip in the 2-4khz is indeed almost 4dB. But bear in mind that still translates to less than +/-2dB. And as explained earlier in the thread, the 2-4khz dip is intentional voicing to get the right total energy in this area when combining on-axis and off-axis response.

With regards to the midbass bump: During testing of these speakers across a number of rooms, we saw a trend of slight dips in this area, meaning this slight (1-2dB) bump actually helped give a more neutral in-room response, and also what gave the most natural timbre during listening sessions. If you have a look in some "share your in-room response" threads, you'll also likely notice that weak energy in the 100-300hz area is actually quite common (not just with these speakers), often due to reflections / SBIR effects.

TL;DR: This is intentional voicing in order to give the most natural and neutral combined response in-room. 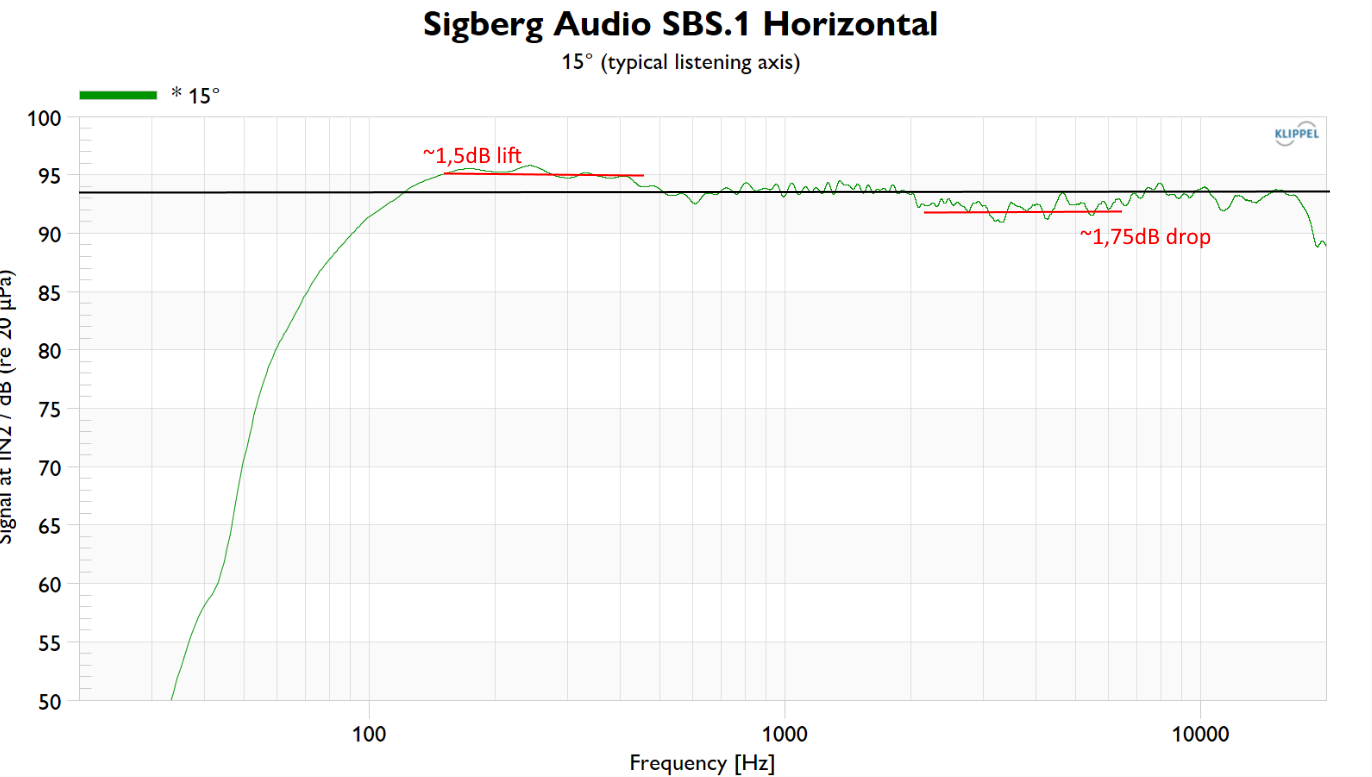 Hercule Poirot is French speaking but his nationality is Belgian!

Pat D said:
Hercule Poirot is French speaking but his nationality is Belgian!
Click to expand...

Lost, you are
Edit: