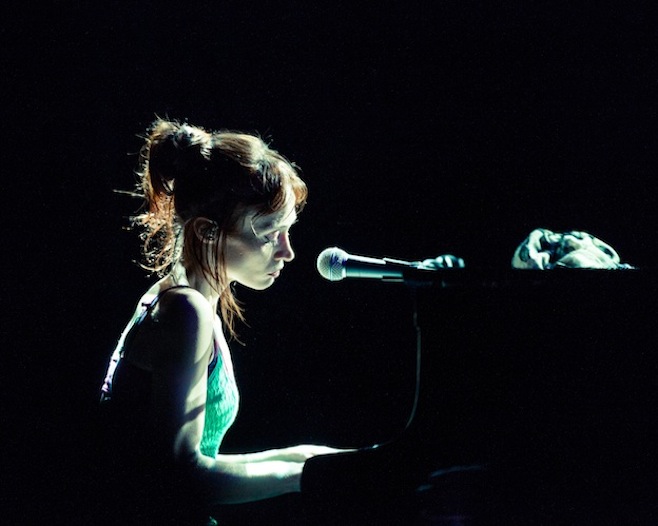 Fiona Apple has shared a new song called "Container" for the forthcoming TV show The Affair, Consequence of Sound reports. Produced by Apple's frequent collaborator Blake Mills, the single will soundtrack the show's opening montage. Listen to it below.
Sarah Treem, the show’s executive producer, said:

“Fiona Apple has been my favorite songwriter since I was sixteen. I am honored and humbled that she has chosen to lend her talent to our opening title sequence. If our show can approach one tenth of the depth and complexity of her song, I’ll be very happy.”
​
The Affair premieres October 12 at 10 PM on Showtime. According to a press release, the show “explores the emotional and psychological effects of an extramarital affair, and will be told separately from the male and female perspectives.”
Check out Fiona Apple's upcoming tour dates with Blake Mills here.
"Container": Their NYC show Tommorow 8/8/15 Saturday is going to be live streamed on: http://lcoutofdoors.org/events/american ... amily-hour

The Radical Self-Respect of Fiona Apple’s “Sleep to Dream,” 20 Years On 
“Now, when I listen to your poop, I hear similarities. I actually wanted to work with him [Jon Brion] so I could be like the rap version of you. That was one of my main goals. The albums that inspired me for Late Registration were your first one, Tidal, and Portishead’s Dummy, but especially your lyrics and how you sing. How is your vocabulary so ill? Were you tight in vocabulary in your school?”

Fight songs rarely take dreaming as a subject. Dream songs rarely put up a fight. To dream and to fight more often seem opposed. When you mix them, you arrive at reality. Many of us fight against all odds for our dreams. Fiona Apple knows that. “Sleep to Dream” is waking.

In the devotional music of my life, which is the discography of Fiona Apple, “Sleep to Dream” is the opening psalm, a struck match, genesis. It is the first track on her 1996 triple-platinum debut, Tidal, which turns 20 this weekend. When Sony asked Fiona to produce a more obvious single, she wrote “Criminal” in less than an hour and for many that song defines her. I never really listen to that one outside of karaoke backrooms. “Sleep to Dream” is the Tidal track that made me. It is a self-activating thesis for Fiona’s radical self-reliance:

I got my feet on the ground and I don’t go to sleep to dream
You got your head in the clouds and you’re not at all what you seem.
This mind, this body and this voice cannot be stifled by your deviant ways
So don’t forget what I told you, don’t come around
I got my own hell to raise

There is a rumble first. Deep, quaking. All bass and space. It rattles the core. The power of “Sleep to Dream” is foundational. Fiona is not asking for a little respect; she insists on a lot, rips it into her deserving hands. “Sleep to Dream” is reportedly the first lyric that Fiona ever penned. She was 14. She sounds not slightly evil, a storm simmering, about to thunder from the skies. Fiona once said that “if you just made something, you should fucking feel like you’ve got nothing left in you,” and even then she had buckets of life to pour in. (Her parents divorced young; she was taunted by classmates; at 12, she was raped outside of her mother’s apartment; she developed an eating disorder.) As a child, Fiona used a knife to carve the word “STRONG” into her closet. She tattooed “FHW,” an acronym for “Fiona Has Wings,” onto her back. Her language always cuts to marrow. “Sleep to Dream” gave me wings, too. It is about getting ready to fly.

“Sleep to Dream” is a song vehemently against fragile egos. Fiona corners a person who is at once uncaring and too sensitive, who is a liar and overly defensive, who is a space cadet and also apparently living under a rock. A deceiving fool. A dull tool. Judas, basically. Should that not be enough, Fiona boils it all down, too: “Don’t even show me your face cause it’s a crying shame.” GTFO.

I’m not sure if this is what Whitman meant when he wrote “dismiss whatever insults your own soul, and your very flesh shall be a great poem”—or what Emerson meant when he wrote that great art comes with “good-humored inflexibility”—but that’s how I’ve always felt about Fiona. That her music is legitimately transcendent. That her lyrics are sublime truths for kids who feel trapped in their towns and bodies and minds. When I downloaded “Sleep to Dream” on Kazaa nearly a decade after its release, Fiona performed an act of insurrectionism upon my teenage life. This was a young feminist awakening of tectonic proportions. I was never the same.

“Sleep to Dream” stares you dead in the eye. It is made of words and Fiona’s flow is pure fire. (It’s worth noting that the only CD she supposedly purchased in all of 1997 was Wu-Tang Forever.) It is also as elemental, tough, and pissed as any punk song, but where punk is grounded in the notion of “us against the world,” “Sleep to Dream” is “me against the world.” “The piano is percussive, you hit it,” Fiona once said. “It was a huge release for me, just banging on it.” There are other instruments, like a shadowy vibraphone, on “Sleep to Dream,” but all I hear is rhythm and rhyme. Fiona is a wordsmith but more like a designer of armor through turns of phrase. I could put this on and become invincible.

Accordingly, disciples of Fiona Apple do not truck around. We live our lives with the conviction that our personal connection runs deepest. Kanye has long been among our ranks. Before The College Dropout came out in 2004, a 25-year-old Kanye told one magazine, “I like to take things a little too far, but hey, what’s too far? That’s like the people I respect the most, like Mariah Carey and Fiona Apple, anybody that wilds out and really says the truth. Like, truck the industry, man, truck all this. They’re so corporate, they make it seem so free, but there’s all these politics you gotta deal with. That’s why you gotta be the type of artist where they have to deal with you.”

Later, in 2005, Fiona chopped it up with Kanye for Interview. She asked, “Do you have a lot of dreams at night when you sleep? I have a lot of dreams.” Yes, he does (god dreams). “Wait,” Kanye said. “I thought you don’t go to sleep to dream? [laughs]” In the same interview, they talk about collaborating in L.A. at the club Largo, Fiona’s mainstay. “Seriously,” Kanye goes. “You’re possibly my favorite.” One Sunday morning in 2010, Kanye tweeted a mixtape that included “Sleep to Dream,” noting how the line “I have never been so insulted in all my life!” was “one of [his] favorite opening lines to a song.” (It is not the opening line, but that’s OK.)

Fiona and Kanye are both classic rebel spirits infiltrating pop music. They are eccentrics who offend square America and still remain Great American Songwriters. They also both embody whole sets of principles for living. When the video for “Sleep to Dream” won an MTV Video Music Award in 1997, Fiona gave that speech that ought to have been considered heroic, like a banner drop atop popular culture. “Maya Angelou said that we as human beings at our best can only create opportunities,” she said from the stage, “and I’m gonna use this opportunity the way I wanna use it.” It is not hard to imagine Kanye taking notes. You could picture him tweeting all of this. “Everybody out there that’s watching this world—this world is bullshit. You shouldn’t model your life about what you think that we think is cool and what we’re wearing and what we’re saying and everything. Go with yourself.” Later on her website, Fiona clarified that the VMAs made her feel like a “sell-out”: “I had successfully created the illusion that I was perfect and pretty and rich... I'd saved myself from misfit status, but I’d betrayed my own kind by becoming a paper doll in order to be accepted.”

This was a survivor on stage quoting Maya Angelou and telling kids to not buy into the lies and images they are constantly fed—spurred on by a music video of a girl alone in her bedroom singing about manifesting her dreams—aiding us with something that could help us to live. The strength that requires is superhuman. The stoicism it takes to harness your pain and make it dance is as rare as gifts come. Fiona knew what the mirage of perfection was worth: nothing.

Joan Didion once wrote that “innocence ends when one is stripped of the delusion that one likes oneself.” Fiona helped to slow that process. As someone whose teenage life was turned upside down by unattainable images, it is hard to overstate how powerful it remains that Fiona did something to claw out the truth. Since late capitalism works on a molecular level to make girls hate themselves—since it thrives on feminine self-loathing, on dysmorphic thinking—many of us lose our innocence young. “Everyone’s born confident,” Kanye has said, “and everything’s taken away from you.” By the time I was 16 I had learned that as a girl you are never taken seriously. If you are big, you are not taken seriously. If you are small, you are not taken seriously. If you are sick, you are insane. If you are fine, you are boring. “I have never been so insulted in all my life” was basically how I felt about the entire world.

“Sleep to Dream” is prophetic in its battle to not be misunderstood. Why does Kanye love Fiona so much? Because she is a genius. But perhaps it is because Kanye, too, fights endlessly to be taken seriously. As a teenager, I knew some version of this feeling. All I wanted was to be taken seriously. And the gale force sonic boom of “Sleep to Dream” sounded serious as hell. It just cut straight to the point of everything.

This song lifted me up from someplace I’d felt buried deep. It saved me then—a girl with a volatile relationship to herself, a person I left behind. I loved records and reading the newspaper. I was tough and alone. I had no self-confidence but an inexplicable amount of personal drive, burning to exist in places I thought I shouldn’t likely be. Growing up online both brought me closer to Fiona and exacerbated my need for her music. I made a shirt that said “Listen to Fiona Apple” by cutting up and reassembling the letters from two emo band tees, which was too fitting as I was definitely done with all that poop.

Fiona goes to extremes for people who need them in order to survive. When I listen to “Sleep to Dream,” Fiona is singing to every person who ever refused to take me seriously. To anyone who made me hate myself. To the systems that destroyed my innocence. But those people do not really get to be the subject of this song. They don’t animate it. They don’t get a word. Those people hardly come to life. Fiona does.

New music being recorded + a remake of her song with a newer artist. I will update on a new thread once a single or album release/drop date is announced.
https://www.google.com/amp/s/www.thefader.com/2019/03/18/fiona-apple-new-music-2019-instagram-preview/amp

afterlife2 said:
New music being recorded + a remake of her song with a newer artist. I will update on a new thread once a single or album release/drop date is announced.
https://www.google.com/amp/s/www.thefader.com/2019/03/18/fiona-apple-new-music-2019-instagram-preview/amp
Click to expand...

This is a series of interviews(Warning strong language). Episode 1