Administrator
Major filmmakers and Hollywood studios have teamed up with an industry coalition called The UHD Alliance to develop a new TV viewing mode called Filmmaker Mode. This mode would automatically, or with the push of a single button, disable post-processing such as motion smoothing (a.k.a. “The Soap Opera Effect”) and preserve the correct aspect ratios, colors, and frame rates chosen by the content creators. With Filmmaker Mode, your TV would always display your movies and TV shows exactly as the filmmakers intended them to be seen.

How do you feel about motion smoothing and interpolation on HDTV Displays? Vote in our poll. 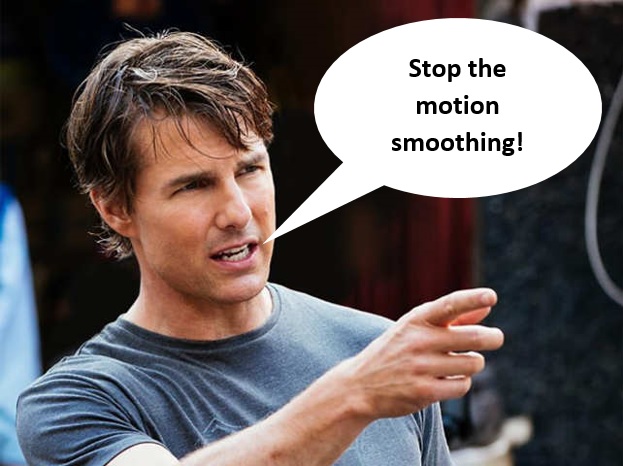 Soap opera effect chaps my a$$. It’s really stooopid that the the market got pushed towards LED/LCD when they use such a “crutch” that makes watching unbearable. I worked with an older fella selling TVs once and he said he couldn’t even see the effect. Weird...
B

Or the TV companies could just set it to off by default?? Seems like an easier way to go.
J

Life does not happen at 24FPS.

The standard frame rate that was established over a hundred years ago was considered the minimum necessary to fool the mind that it was seeing continuous action. The effect is known as persistence of vision. That we can make sense of 24 frames per second with black frames inserted in between and accept it as something close to real is fine, but adhering to the belief that movies must only be at 24FPS is insane. How does making the movie more realistic diminish its quality?

Siskel & Ebert reviewed a movie demonstration over 20 years ago where a company was proposing a way to run film at 48FPS and they loved it. The film blur that was evident on frames where there was fast motion was gone. They were hoping that it would become a new standard. It didn't even though it used no more film stock. It did, though, need new projectors so that is most likely why it didn't fly.

One of the Hobbit movies was done at 48FPS. I remember seeing reviews where it was berated for not having enough film judder. It was too smooth. Like life.

My current set, the best 46" set Samsung ever made (because they no longer offer the size),came with de-judder and interpolation off. I, then started experimenting with those settings and, at first, didn't like it. Then, I watched the CG animated feature, Captain Harlock, on Netflix. It has sweeping camera moves that had 24FPS judder on steroids.

When I took the de-judder and interpolation up over and over again watching the same scene repeatedly, my conclusion was that I loved the way it looked with both turned all the way up.

Every time I see the intro to a Universal Studios movie with that giant, CGI logo coming in, it's really smooth... like real life.

I'd prefer that movies were way faster than 24FPS so that they are more real. Why the deficiencies of a medium are considered positive when they spend so much money on making them real to hyper-real is beyond me.

It's like promoting that hi-res digital audio should be shunned in favor of CD's. I don't get it.

I do think that higher framerates look better. I wouldn't want it for movies that are made for 24fps though. Movies should be presented as closely to the artists' intentions as possible. However, filmakers really should make the jump to higher framerates. I think that the criticism that it looks 'too smooth' is just reactionary since that simply isn't the way we are accustomed to watching movies. When it does become more common, I am betting that people in the future will look back on the way movies look nowadays as having a seemingly 'flat' appearance. The famous effects artist Douglas Trumbull knew this decades ago and tried to popularize higher FPS way back before film was ever shot digitally. It's too bad his ideas never caught on.

Movie theaters didn't usually show at 24fps from what I remember....they used some sort of multiple shuttering to somewhat do 48 or 72 fps....but it's been a while and theaters are mostly digital now....
J

I upsample. You don't. That's fine. This whole BS about not upsampling the frame rate is a tempest in a tea pot. Of course, a moron like Tom Cruise throwing his 2 cents in doesn't help the case.

Again, use the digital medium to its potential. There is nothing great about 24FPS. In fact, it's deficient.

Upsampling on tvs I've seen just looks awkward. Maybe I could appreciate a film made that way....missed on The Hobbit, tho. Any others?
J

lovinthehd said:
Movie theaters didn't usually show at 24fps from what I remember....they used some sort of multiple shuttering to somewhat do 48 or 72 fps....but it's been a while and theaters are mostly digital now....
Click to expand...

Check your discs when they play. Everything film released that I'm running into is still running at 24FPS unless it was done for TV. Then, of course, it's done at 30FPS or 60iFPS. Unless it's from TV other than the US and then it may be at 25FPS.

That they have moved to digital for the projection system doesn't change that. And, yes, most films are shot digitally now. They are still looking at the storage capacities for the cameras and associated systems regardless of how cheap hard drives are and how massive digital storage can be. It's easier to edit lower frame rates.

I don't get it. It's like putting out Slash's latest concert video on vinyl when it was recorded digitally and you can buy the Blu-ray/CD set for $23, but the vinyl, with no video and gigantically less resolution, costs $44.

Counterintuitive doesn't even begin to explain it.

Please don't make me watch Slash. I'd almost buy the vinyl (not really, stopped buying vinyl long ago) to avoid that I know much of what I own is 24fps and I have no real issue with that, grew up on it and it looks fine to me. I did have an lcd set with that awful motion interpolation stuff, that was horrid. Technology can be slow to change, particularly when old money is involved.....I'm still on copper dsl....suck it up buttercup
B

I saw the latest Quentin Tarantino movie Once upon a time in Hollywood, in a theatre with a 70mm film print and projector. For the first 30 minutes it was distracting and a bit annoying seeing all the film judder and bounce. I don't see how its so great. I guess I haven't seen many film movies in a theatre since the 90's, not sure when they started switching to digital projectors.

Yea, the Hobbit was filmed at 48 fps at 5k. On the other hand, that seemed almost too realistic when I saw it in the theatre. Maybe they should do a compromise frame rate between 24 and 48, like 36fps??
P

It's crazy to me how people can prefer higher frame rates in movies...looks so terrible.
X

These poll options seem very absolute, as while the use of interpolation is yes/no there is a lot of middle-ground between 24 FPS and full-blown SOE. I personally opt for a minimal amount that makes things smoother but doesn't get anywhere near the artificial-looking SOE that many are referring to in this type of conversation.
W

Film maker mode seems to be a small step when a bigger leap is needed. Why not turn on accurate colors without the need to calibrate and turn off sharpness. what's a motion smoothing setting in the sea of settings people have to mess with to get the image right? 24fps with red push and artificial edge enhancement... just sayin

William Lemmerhirt said:
Soap opera effect chaps my a$$. It’s really stooopid that the the market got pushed towards LED/LCD when they use such a “crutch” that makes watching unbearable. I worked with an older fella selling TVs once and he said he couldn’t even see the effect. Weird...
Click to expand...

Yeah you do not actually see the soap

opera effect except on some of the earlier 120 hz models . The test I honestly do not see any effects, you see soap opera on a 60hz tv with no 3:2 pull down also . I once returned a 60hz suhdtv

Thank God because I hate that motion crap on tvs.
W

I could understand if they set the TV in a preferred mode that you could override, but to prevent you from adjusting your TV to your liking? Pure arrogance on the part of the Hollywood set.

Wu-Fer said:
I could understand if they set the TV in a preferred mode that you could override, but to prevent you from adjusting your TV to your liking? Pure arrogance on the part of the Hollywood set.
Click to expand...

You would still full control, just no control over this one viewing mode.

Sleqzypig said:
Thank God because I hate that motion crap on tvs.
Click to expand...

My Sony 120 hz has no soap opera effect but sadly it’s not hdr .
O well haha it’s going to have to work for a long time .