Time for a deep dive into my Russian Dolls.

In another thread there was a video posted with a cabinet restoration of some Radiotehnika S-90's. From my googling, these were in production from around the late 1970s until the mid-2000's with different branding and some design variations. The pair I have are "Baltek Audio Baltic 90." Different variations I've seen all have the same driver complement and crossovers however. Some of the designs are "out there" to put it mildly. Having overload lamps, L-Pads and a response graph all on the front baffle would have fried my synapses! I'm thankful that mine are tame and conventional. Butterface speakers- leave the grilles on.

These have a couple of glaring design flaws, one of which I finally decided to resolve. When using these, there would be a nasty port resonance at times. It sounded akin to placing a thin sheet of plastic against a vibrating object... which in a sense isn't far from the truth.

I'm quite fond of these, having owned them a few months. The bass is strong but not boomy, the mids are clear and the highs, while bright, can be adjusted to taste. I don't have measurements to prove if they're "good" speakers, but I can show they certainly aren't cheaply built. Quite the opposite, these are tanks...

Patient 1, up on the operating table: 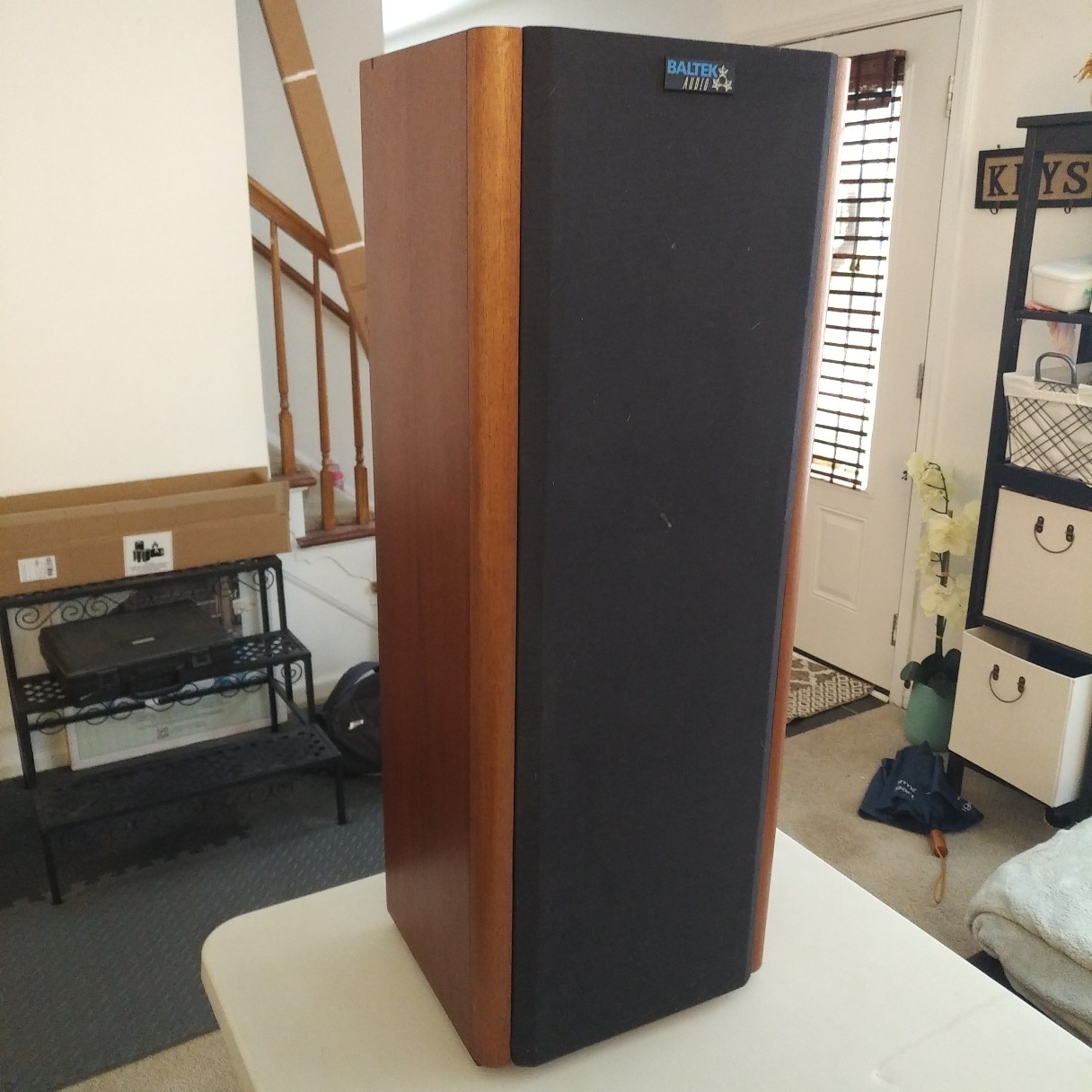 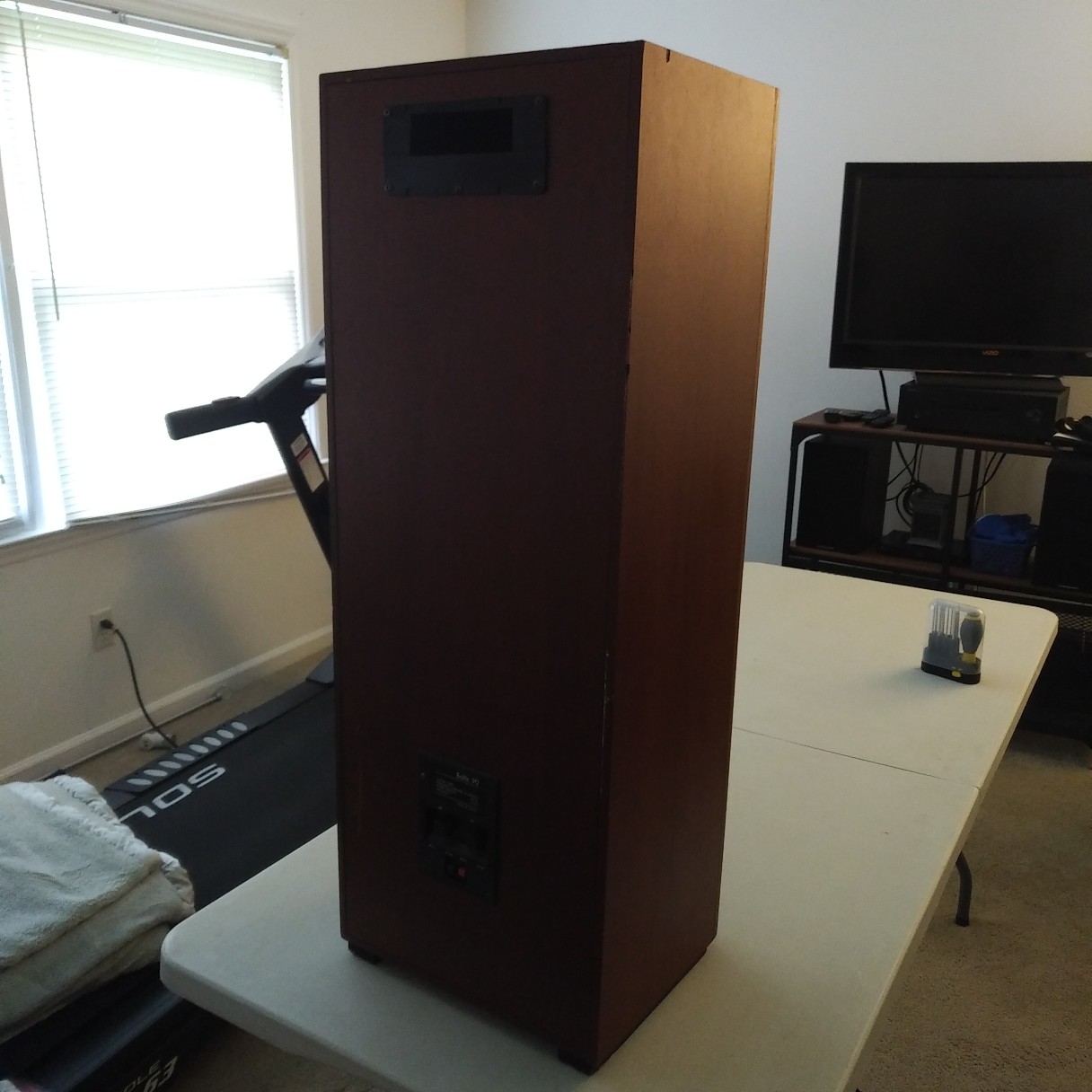 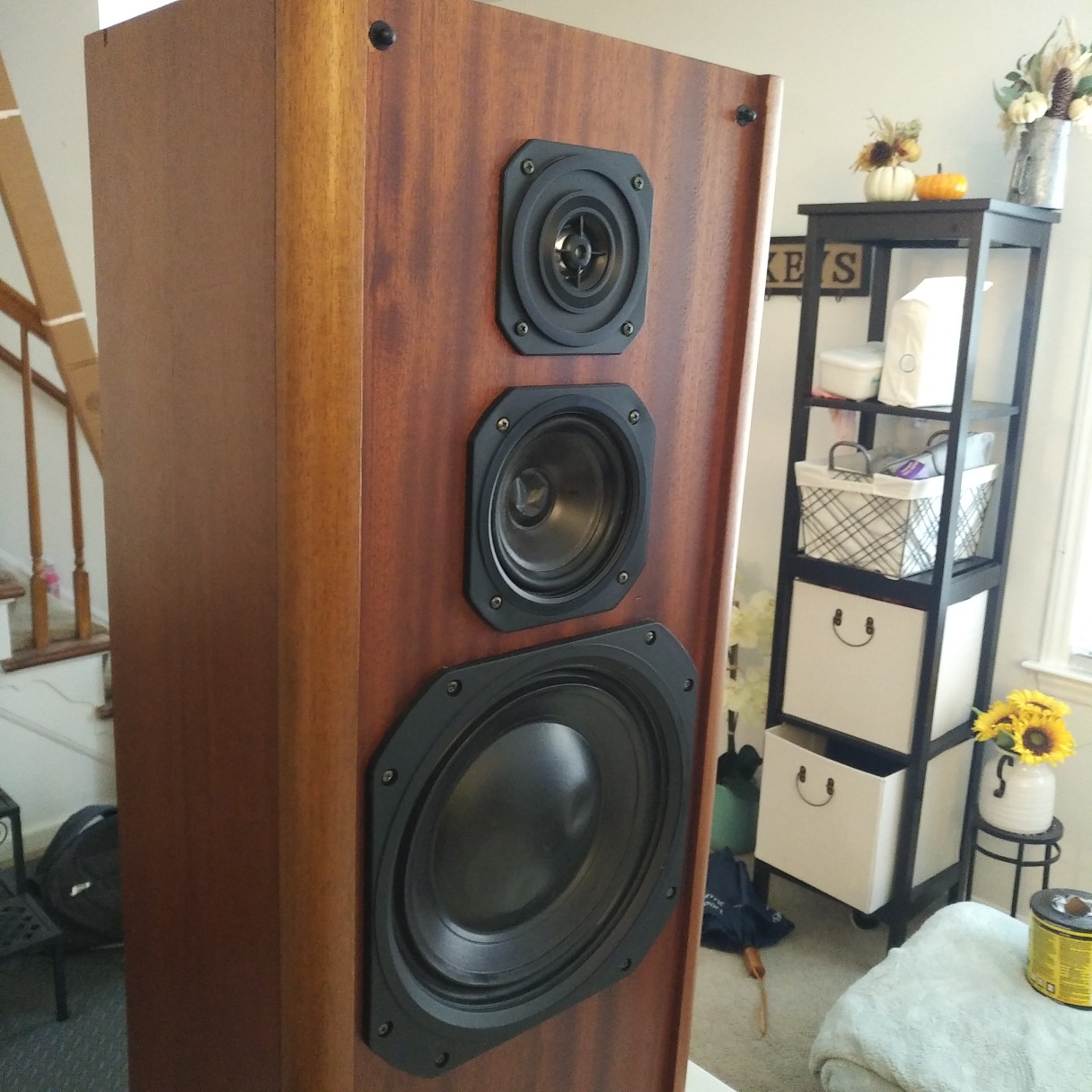 Close up of the mid/tweet. I couldn't get that midrange dimple out using the "easy" methods, but I didn't want to risk damage: 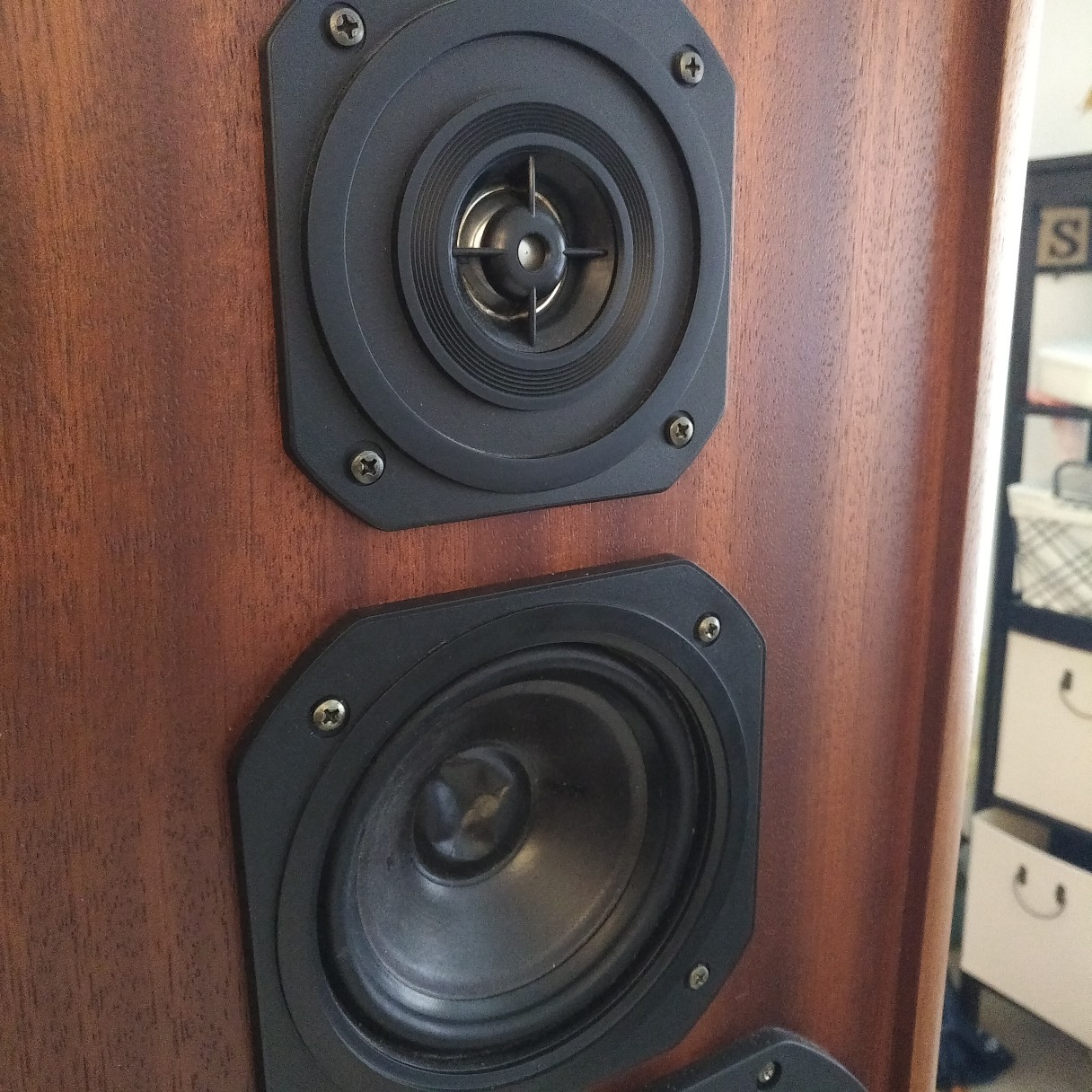 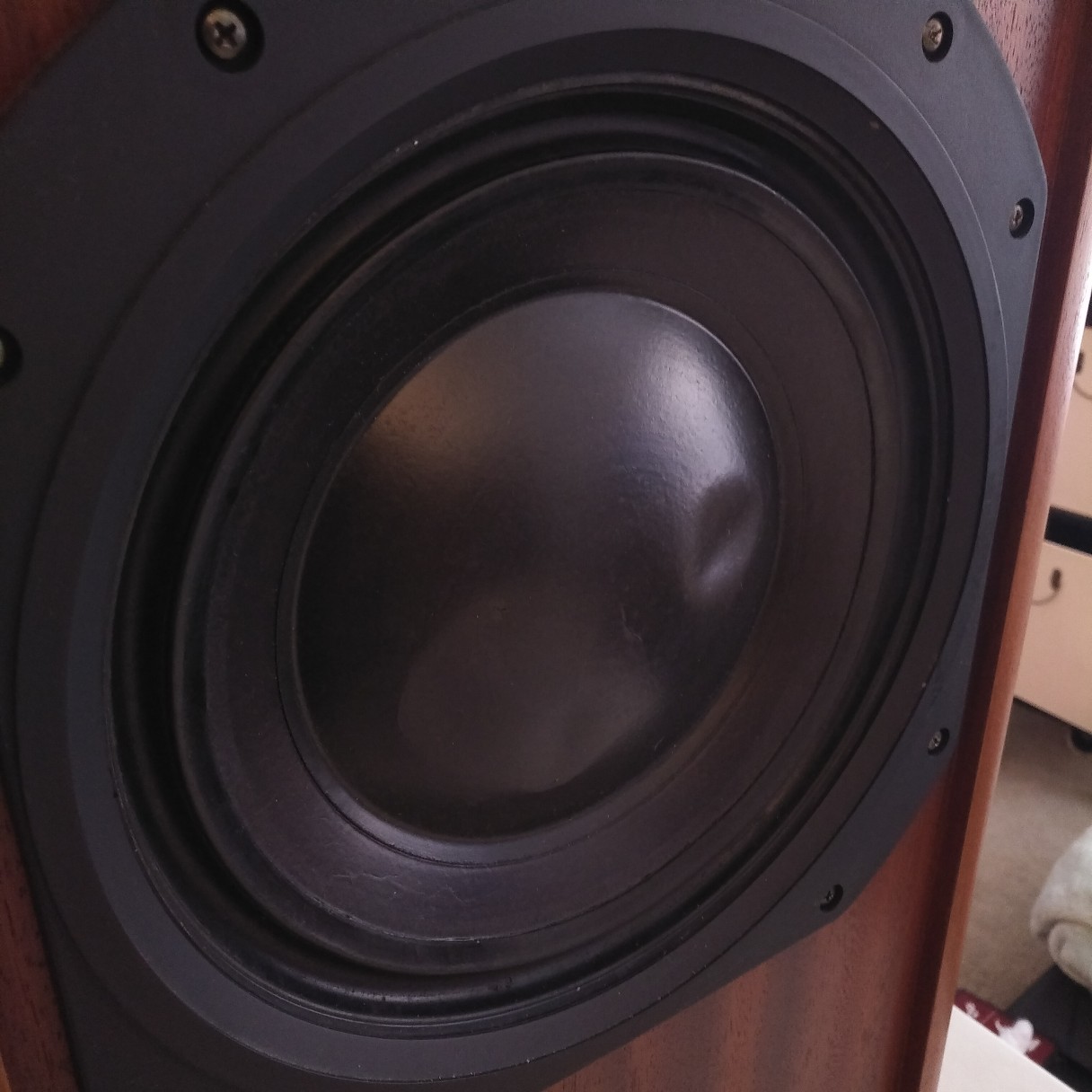 Full frontal nudity follows. All three drivers have plastic rings. For the woofer, it's primarily decorative, as the driver is held in with machine screws: 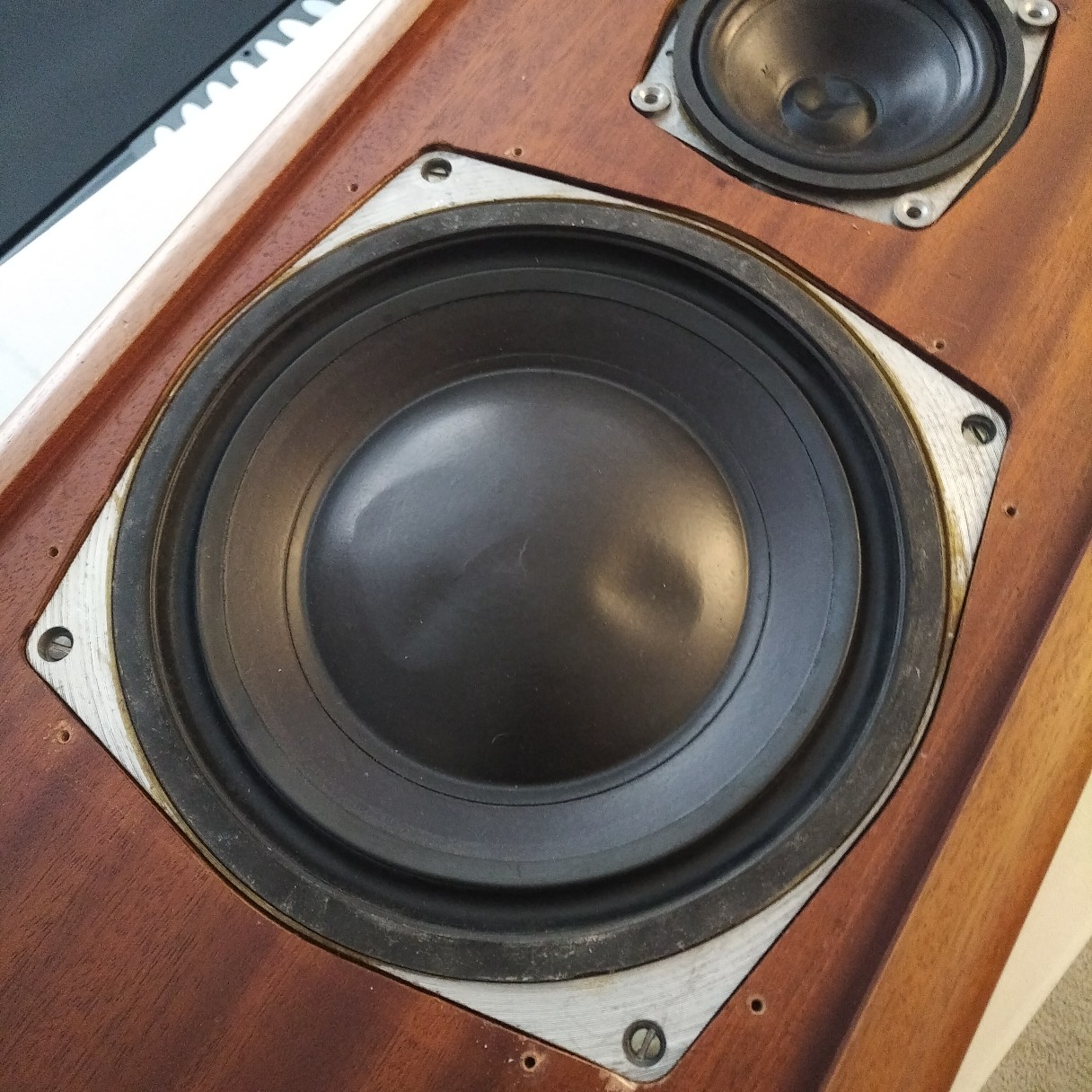 The mids and tweets are fastened in place with the same wood screws as their respective rings: 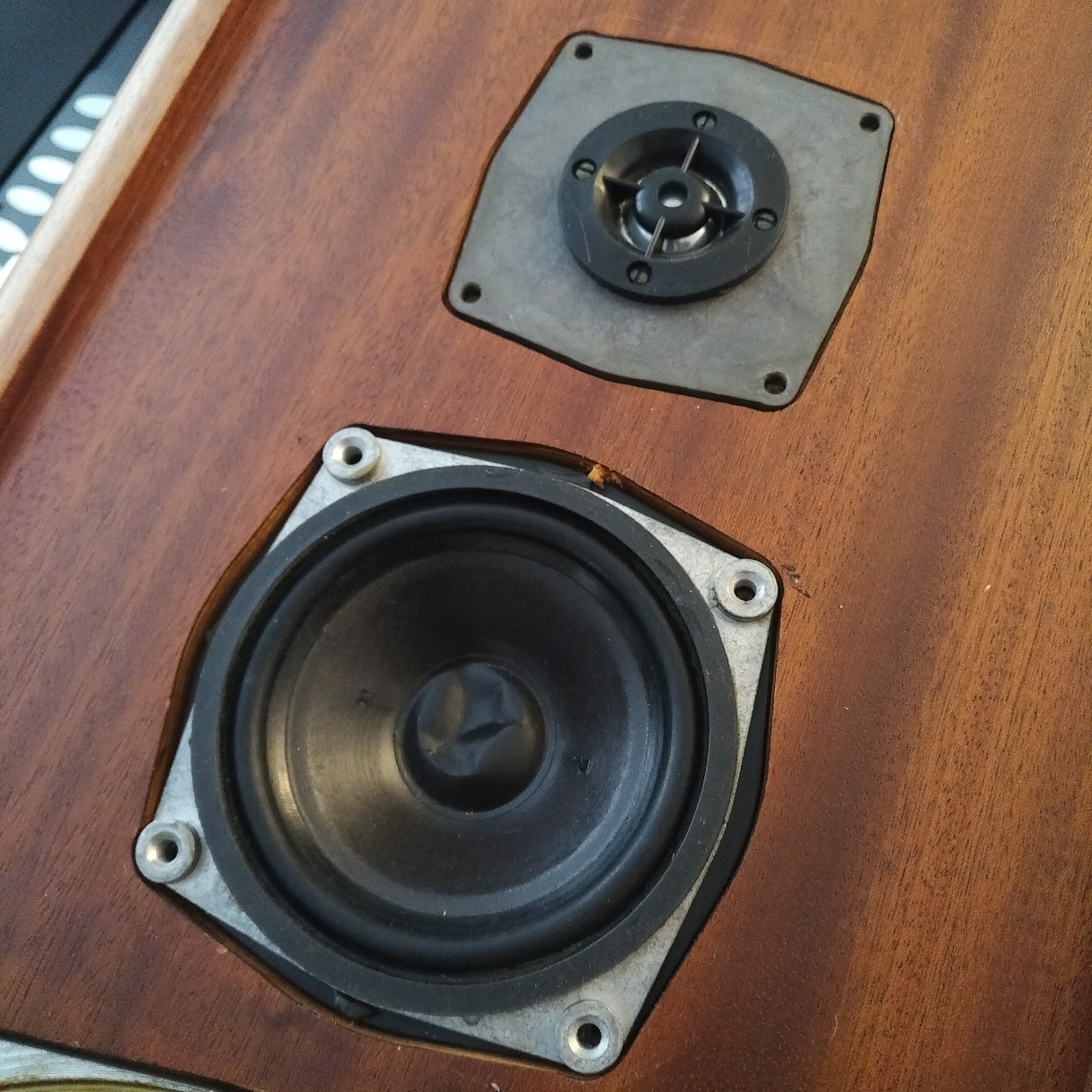 All three drivers removed. I wish I had gotten more pictures of the individual drivers... hindsight and 20/20... But all 3 are built like tanks, with thick metal frames. You could bludgeon someone to death with those tweeters! 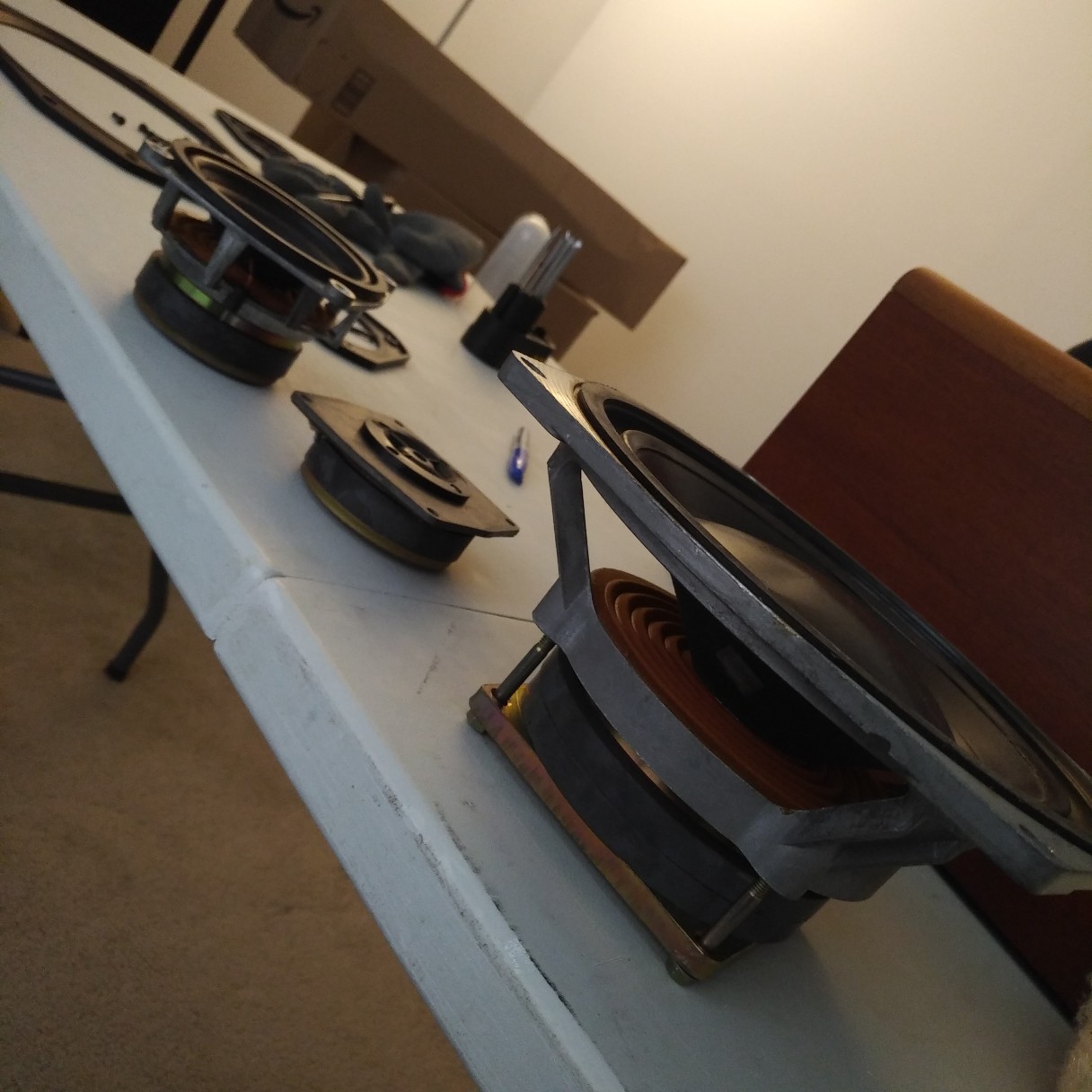 The fill is neatly packaged in this netting. It is positioned just above the crossover and against the midrange chamber: 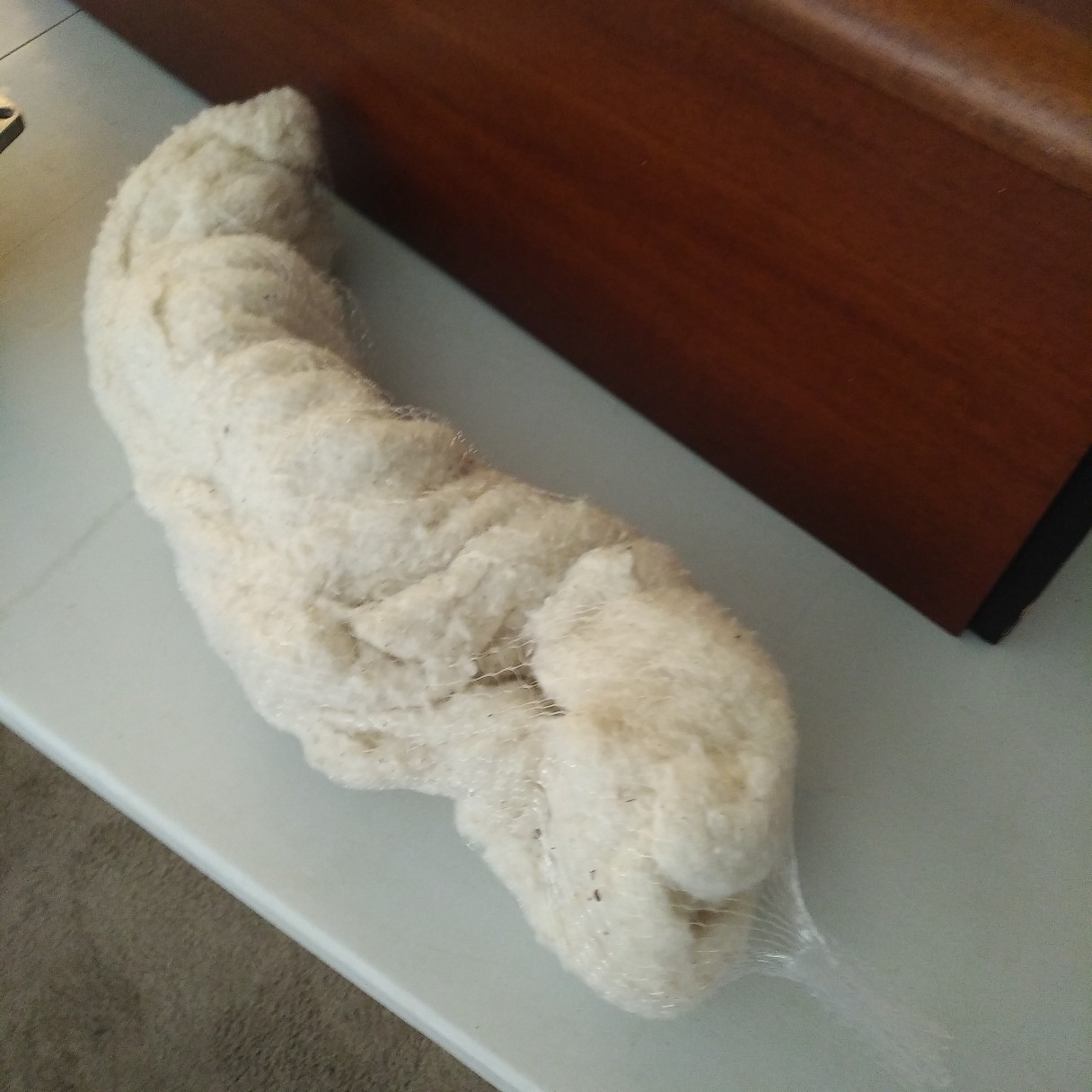 The front baffle is 7-ply birch, and I have the splinters to prove it! 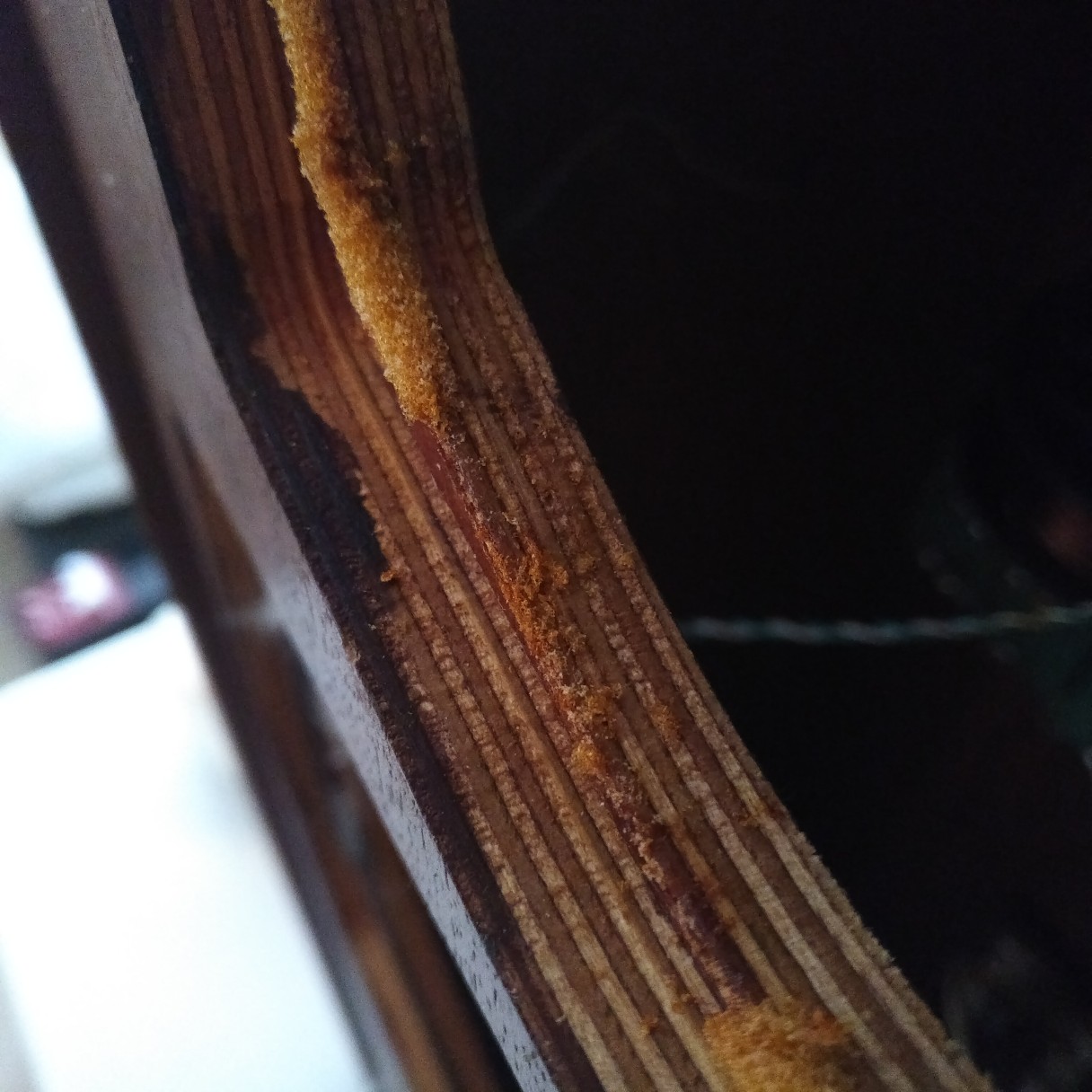 The rear panel is particle board sandwiched by birch layers: 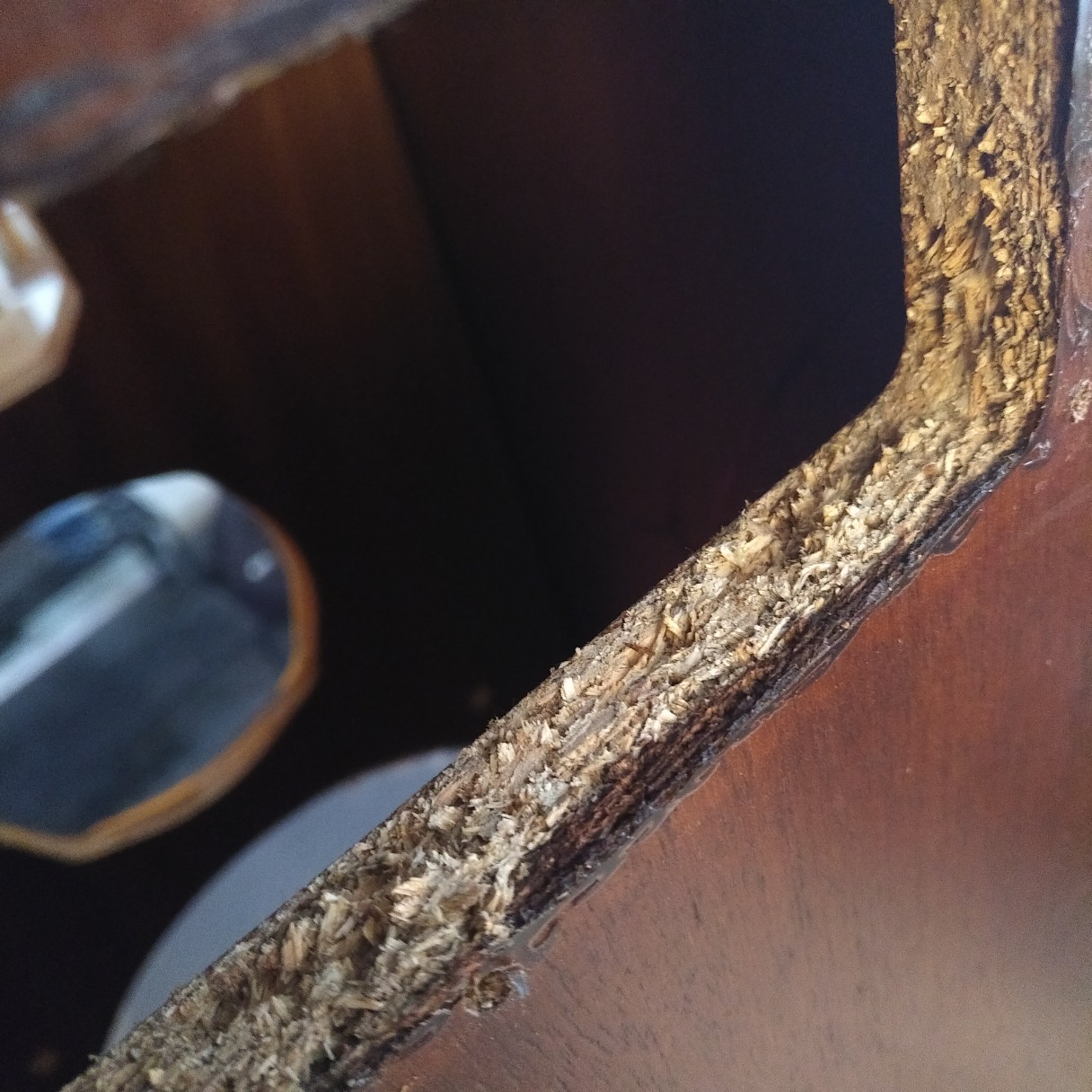 Heading inside... here's that crossover. Yikes! Talk about overbuilt Russian engineering! It is HUGE, almost the entire width of the cabinet. If you look closely enough, you can see one of the two big design flaws- how thin the speaker leads are. When time permits down the road I plan to solder in some thicker gauge leads. 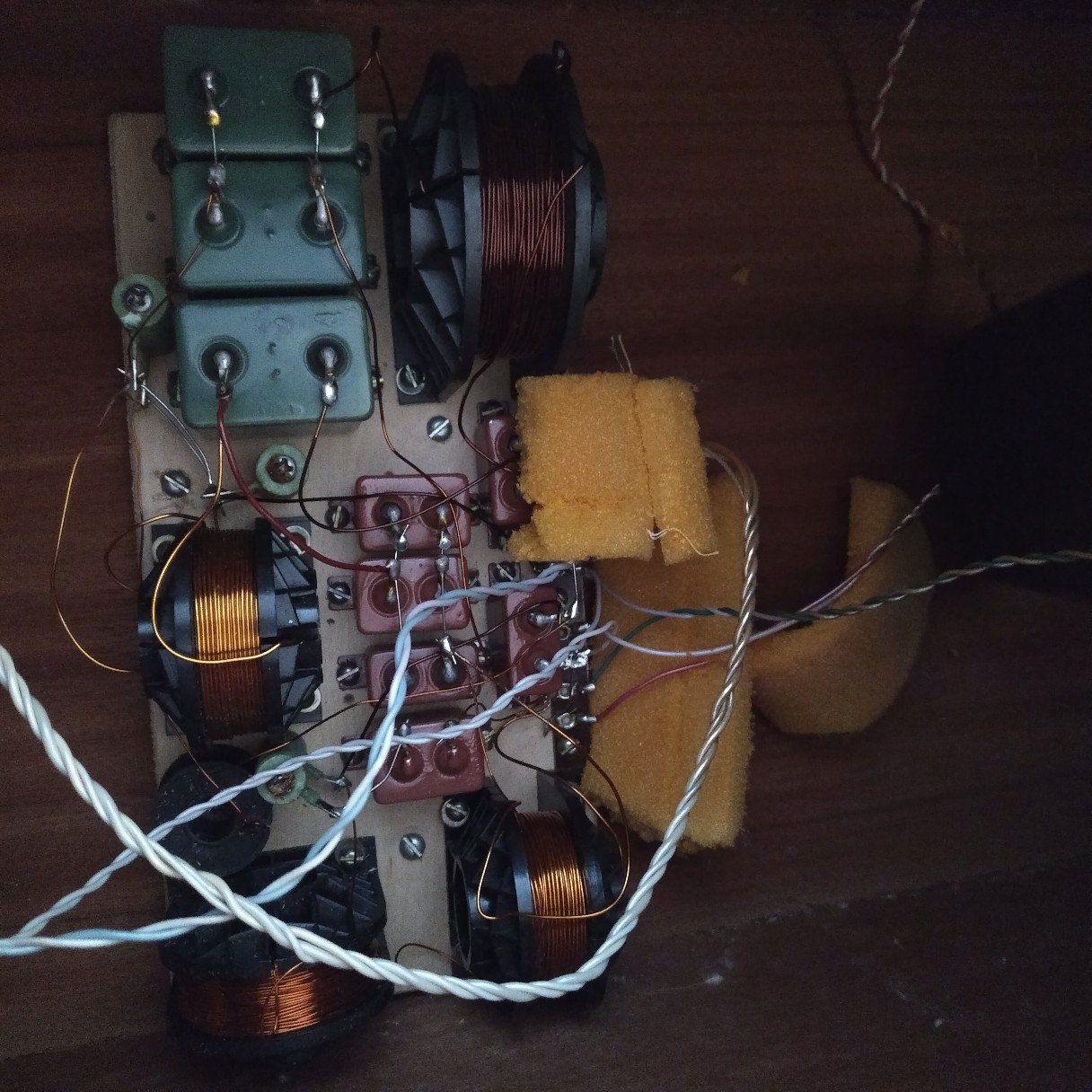 Towards the bottom of the cabinet. More stuffing, and "the dreaded L-Pads!" 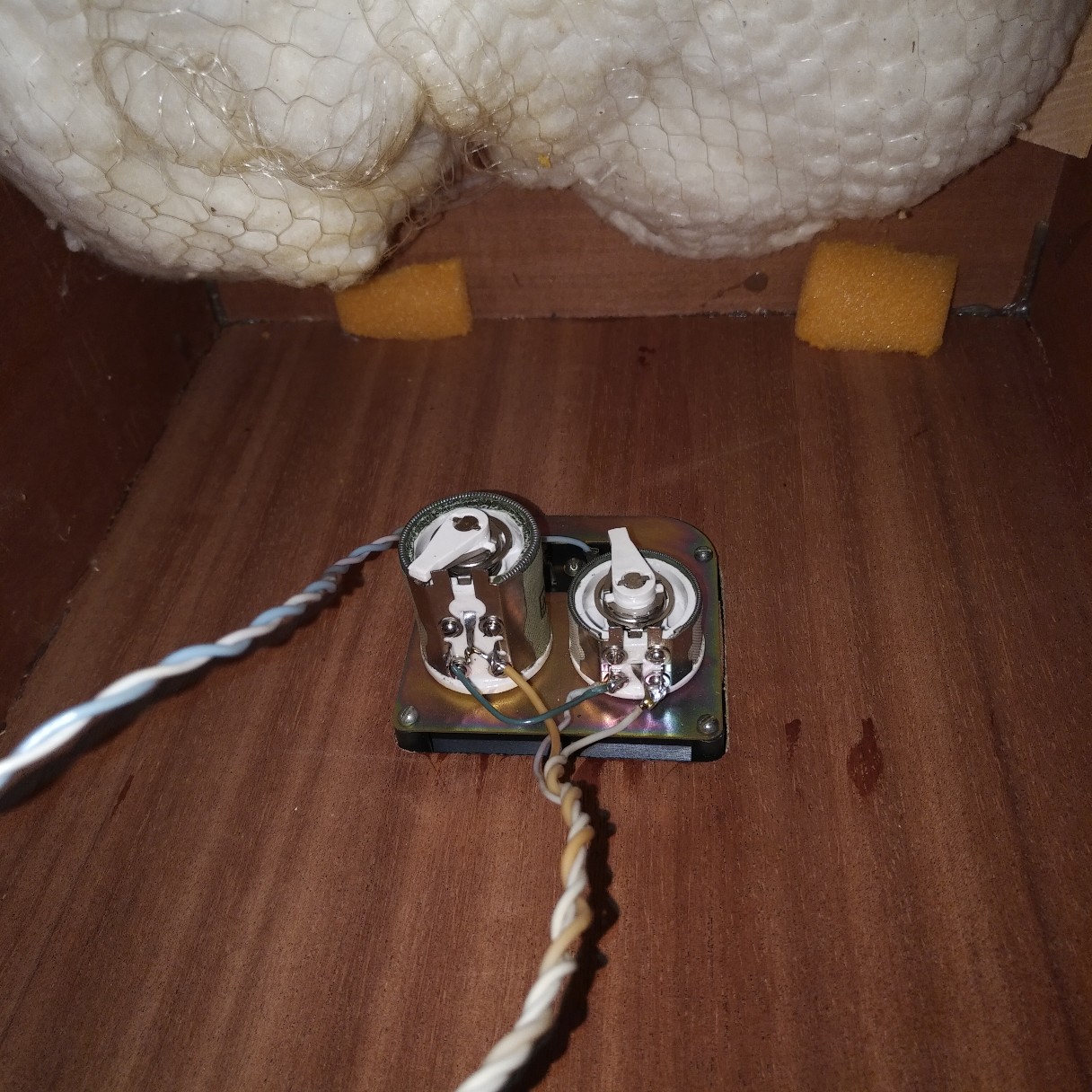 Aiming at the top... and here is the Prime Annoyance. That flimsy port. The design is unusual, but I wouldn't care about that... it's the choice of material! That plastic is ridiculously thin and it's no wonder it made so much "flapping noise" when in use. The speaker doesn't have to be opened to remove the port, by the way... I just wanted to get pics while I already had it on the table. 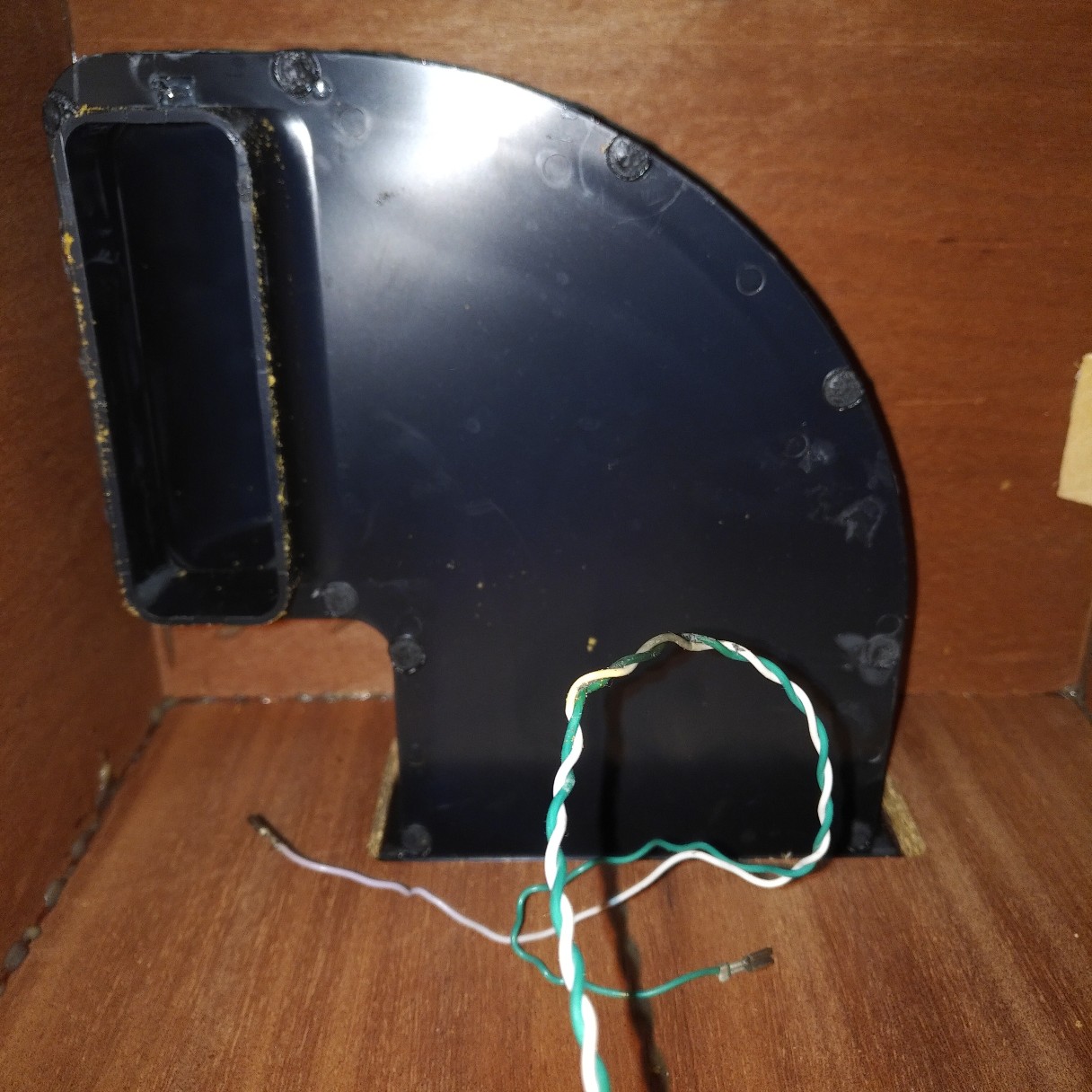 I knew this would be an easy fix though... just add mass to the port for rigidity. I didn't think I'd need anything as heavy as Dynamat, so I went for a roll of this stuff at Home Depot: 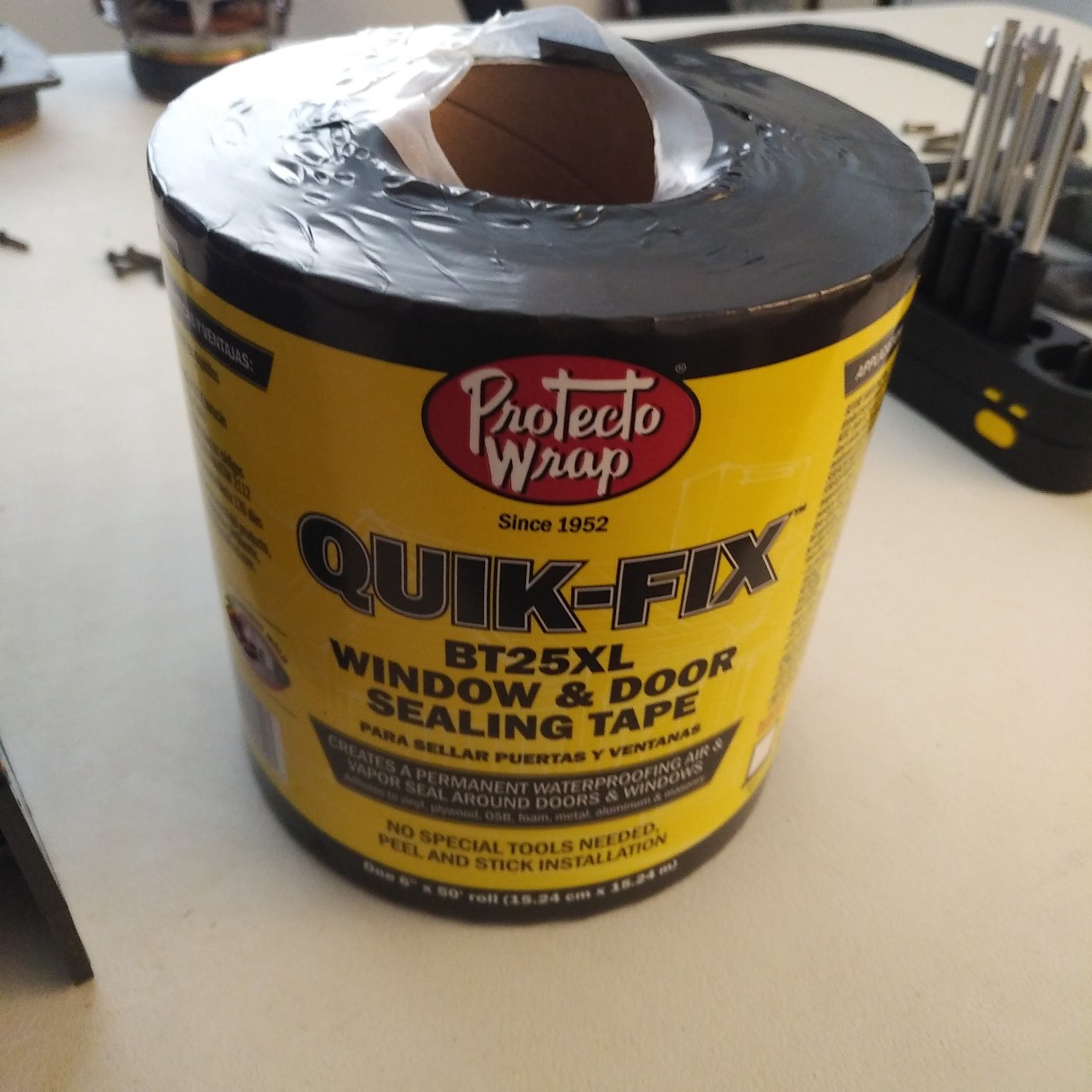 After a little bit of cut, peel, stick, rinse, repeat, I got nearly total exterior coverage. I didn't line the inside since that could affect port tuning: 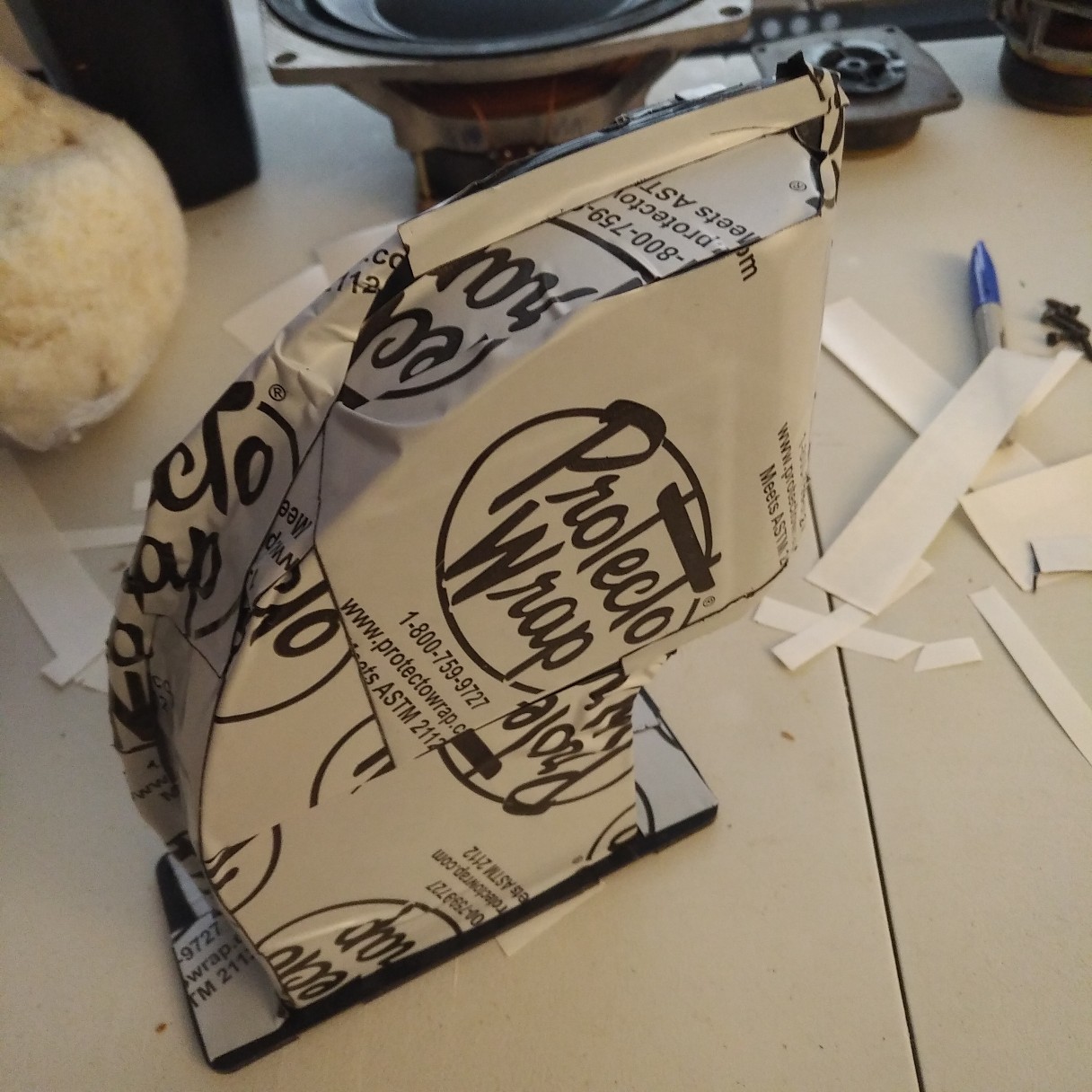 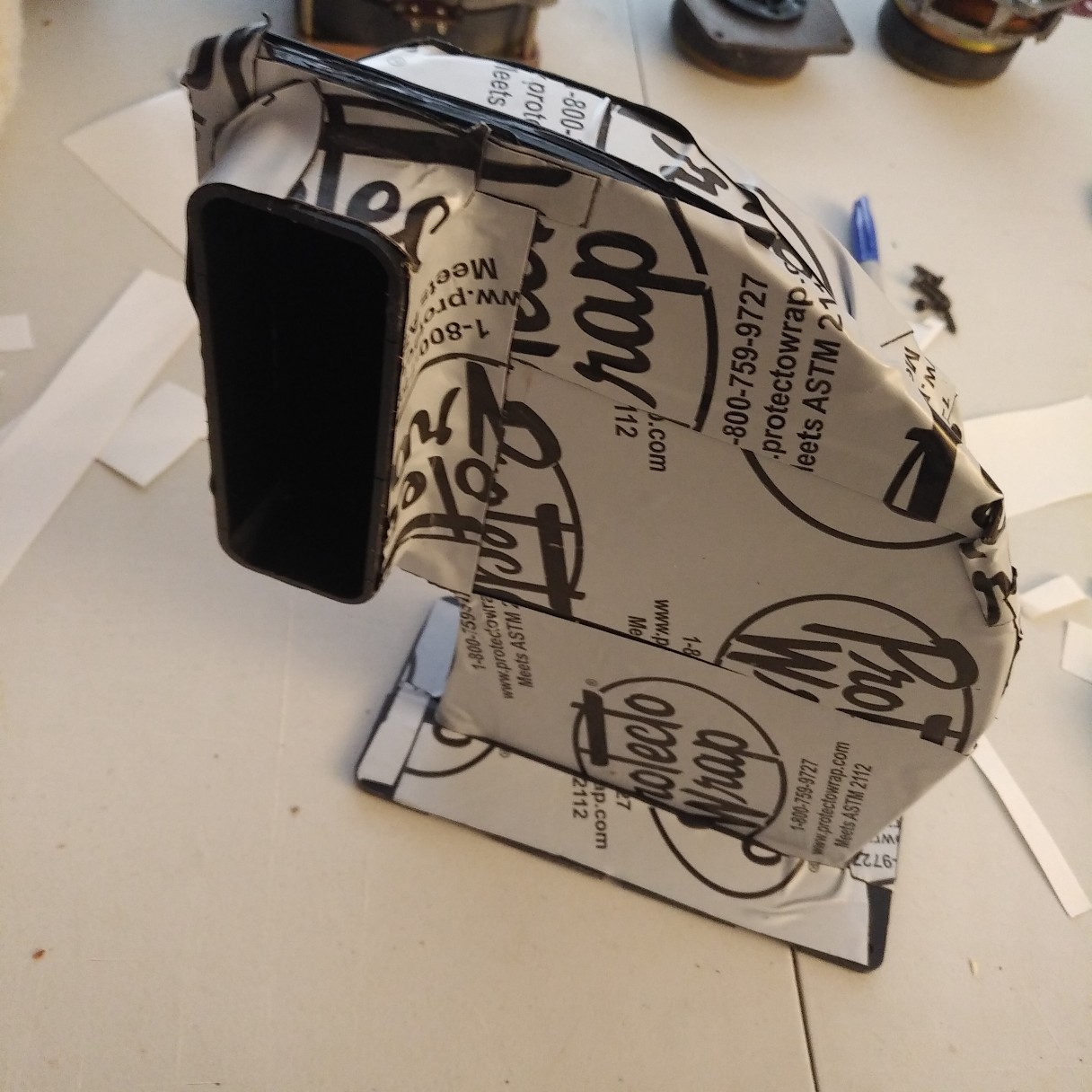 The midrange chamber is actually thicker plastic than the port, but eff it, I had it out already, so why not? 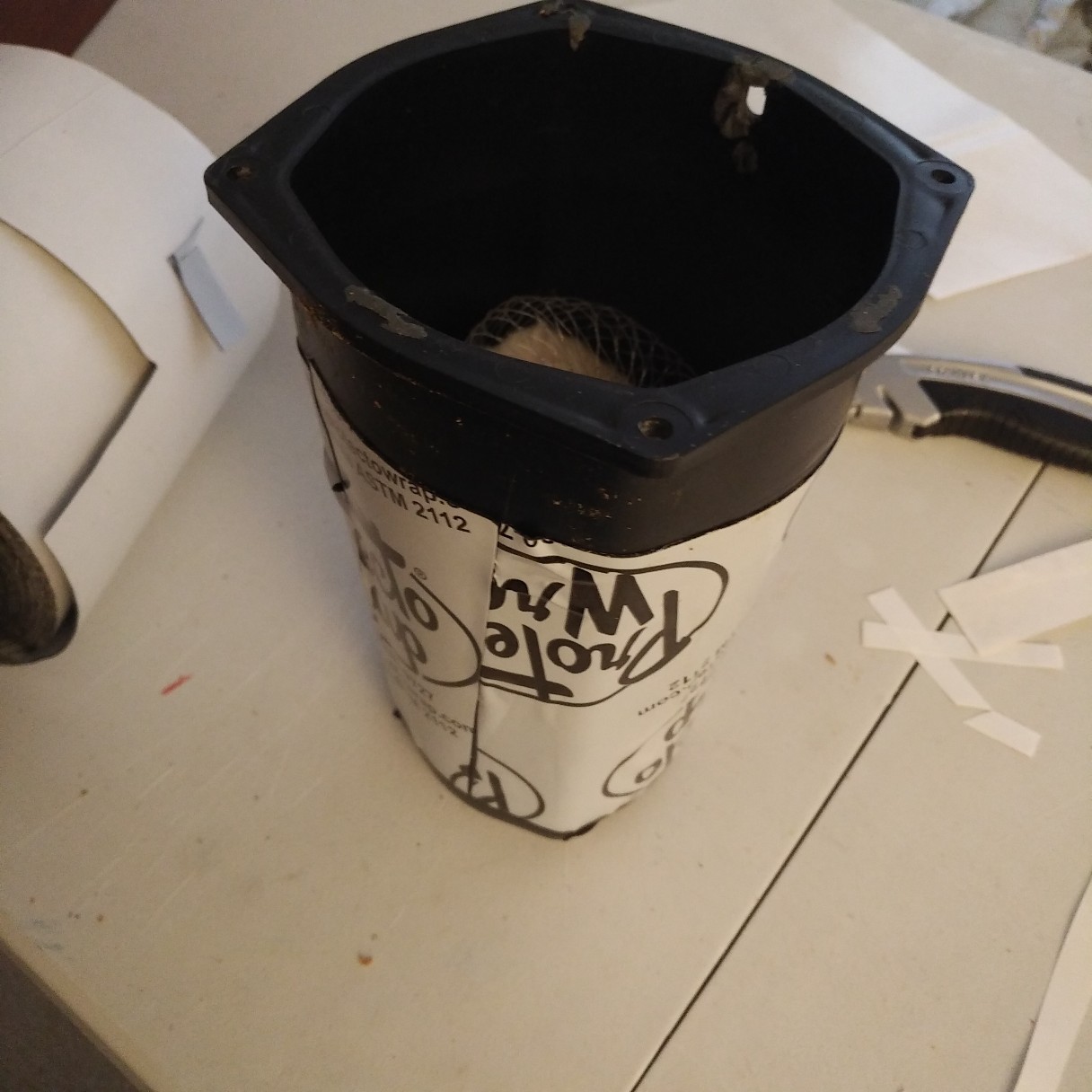 And that's it! I put it all back together, buttoned it up, and ran some bass sweeps. No more flappy port noise!

If you made it this far, congrats and thanks!
S

I hope you didn't pay a lot for these. That port design is just abysmal by today's standards. There is no way it isn't running into significant turbulence at moderate levels. That particle board sandwich construction wouldn't bother me too much, to be honest. My guess is that particle board has pretty decent damping behavior for a loudspeaker cabinet. My only concern would be how does it stand the test of time since humidity can screw up particle board, but since that speaker is still standing after all these years, I guess it worked.

Nah I only paid like 120 or 140, and I have no regrets. I like finding stuff for cheap that's not mainstream... Craigslist is always flooded with the big brand names so equipment like this catches my eye and sometimes I just say "why not" and go for it.