ryanosaur said:
I probably woulda just stripped the ends off an RJ6 Coax and called it a day. (Assuming it fit!)
Click to expand...

I wanted it to look more professionally matched, and the cable to lie a certain way so that the amp can be taken apart without stressing anything. Here it is lined up ready for powerup and adjustments. I may hinge the heat sinks so that the whole thing can be opened up like a book of sorts but don't know yet. I did get it to fire up with the bulb tester but haven't sat down to adjust it yet. Been a lot of late work nights these last few weeks (we're down a welder) and I have not felt like fiddling with more electricity when I get home. Still don't have the inputs hooked up yet until I am sure everthing else works. Kind of a good thing now, seeing that I have forgotten to drill the screw holes in the rear panel before I got to this point. 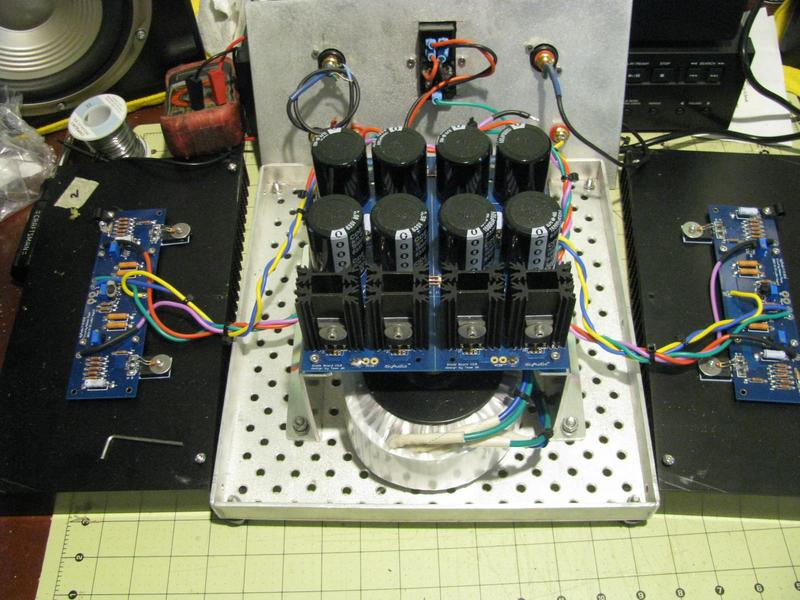 I collected all of these kits and hardware because I anticipated a good deal of downtime during the winter months, in hopes of having some time off. Totally the opposite happened this year, pandemic be damned, and this was before the other guy quit rather suddenly. I still have Carmody's "Speedster" design speakers to build, the 150W "Honey badger" amp, the Korg pre-amp, and some other smaller 2.1 desktop projects.

The desktop projects are a LOT of affordable fun and less dependent on the room, and a heck of a lot of SQ for the money, comparatively. I had come to this conclusion, once I realized just how lonely modern audio tends to be. I was constantly trying to build for an audience that just doesn't exist in this age of IEM and other personal approaches to music. Four, out of five friends I have, with full blown HT systems, are an audience of one as well. The 5th, just he and his wife watch movies and she has him turn the subs way down or even off, when she watches. I have also moved my large system to near field as well and it is a super immersive experience. I still have room for one other person in that, if it were to ever happen.
P

I am still sitting on my F5 project, had the parts (except the case and PS) for over a year now, hopefully will start soldering soon.

PENG said:
I am still sitting on my F5 project, had the parts (except the case and PS) for over a year now, hopefully will start soldering soon.
Click to expand...

I'm glad I'm not the only one that does this.