Although Im playing as cannon fodder I saw a posting around here raving about Kimber Kable speaker wire. Though I dont drink the Kool Aid, kimber does in fact make some really decent speaker cable if you stick to their cheapest lines. No one will argue that the most important factor in cabling is gauge, the longer the run the thicker the cable should be. Also the bigger the drivers on the speakers the more current they require all else being equal.
Well it happens that Kimber sells some very nice looking 12 and 10 gauge cables for not too much money! Plus they use braided conductors which any one that has attended an electronics course aids in the virtual elimination of RF or magnetic interference. And, of course, the look cool. You don't want your 10000 dollar furniture grade speaker sporting Kmart wires would you? I certainly agree that buying cables that cost as much as your speakers is idiotic but that doesn't change the fact that they sell very good stuff too for not unreasonable prices too.
I have a pair of B&W 803d3 which I biwire. I use Kimber AV12 which given their 24 conductors can do the biwiring using only cable (internal biwire). The price was fairly inexpensive, sounds magnificent and looks appropriately elegant for a $17k pair of speakers. (BTW Im also aware that biwiring is mostly hocus pocus contrary to bi-amping)

Edgar, all is good, whatever makes you happy is all that matters in the end. I too know many folks happy with their Kimber 'wire'. I too agree with not spending ludicrous $$ on cabling. As I'm sure you've noticed Monoprice and BlueJeans are very popular as well
E

My point is the6at not all kimbers are $$$$ some are simply $ and very nice fat cables. For example the AV is akin to fat jumper cables but cost only twice as much but look 100% better

I guess if you think aesthetically they do it for you and you don't mind the slime that comes with the brand. Interference and the need for twisted pairs has never been an issue to solve for me. I simply consider Kimber to be snake oil generally and wouldn't waste my money supporting such a company.
E

lovinthehd said:
I guess if you think aesthetically they do it for you and you don't mind the slime that comes with the brand. Interference and the need for twisted pairs has never been an issue to solve for me. I simply consider Kimber to be snake oil generally and wouldn't waste my money supporting such a company.
Click to expand...

Hey they are just trying to make a buck! As with anything else caveat emptor. At least they do state their cable specs. Other "audiophile" cable companies don't even bother. Plus, the prices reflect the price of materials if you want cables made of silver they cost 10 times the cost of copper since that is exactly the material cost difference! Are they going to sound any better? Of course not, but, if someone out there is happy to pay the price of silver then someone will most definitely be happy to build it for them! Not sleaze, simply business. 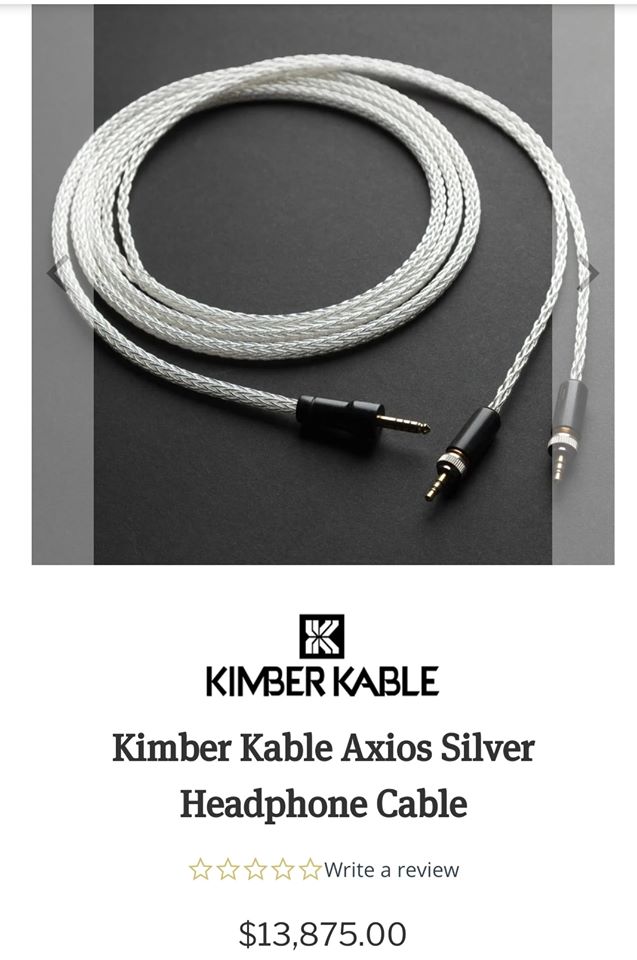 Not if someone wants silver cables! That is in fact not the most expensive ones select silvers of 8 feet are 23k! Everyone is entitled to their own frivolousness! Its akin to a gold toilet!

Why in hell would you need silver cables? Jewelry is nice but inside an insulator out of sight is kinda silly. Or are you going to enlighten us on some sonic properties of silver?
E

Your ignoring the original point, a pair of terminated 8pr (12 awg) orthogonal wound is 238 bucks. Ergo, they offer excellent quality stuff at "reasonable" price too.

No, it's not "worth 238 bucks". It's speaker wire. Orthogonal wound, lol. I don't care, once they cross over into the land of silly audio, screw 'em. Audioquest, Nordost, MIT, Tara, etc...the lot of them.

Hi,
Yep ! went through the usual suspects KK 8VS ? BJC , ZU , Kubla Sosna Cardis Audioquest etc, etc etc although now Ray Kimber also sell $ 7000 ! speaker cables I wonder why ? what makes them different than the cables that Audioholic raves about but after some deliberations and a few years plus a couple of months of Trial and error using different exotic materials gold Silver alloy Neotech ( Zenwave cables ) decided that perhaps I should spend some serious money on cables maybe be 10% the cost of my system (but ended up spending less ) which was still plenty , but having the satisfaction of knowing these cables work best with my Daedalus $17500 MTTM Poseidon Speakers (www.daedalusaudio.com)( coming from Kef Blades) , the electronics are also custom made except for the DAC's So I chose the Wywire Diamond IC's & the Wywire Daedalus Speaker Cables (www.wywires.com) for my seperate HT system went with the low cost Audio Envy loom (www.audioenvy.com) both systems share the Oppo 205 other than that both are a separate systems in the same room . Although I am not a believer in spending absurd amount of money on cables( most high end cable manufacturers have 60 to 70 % mark up margins from what I have learned I don't have much room treatment as it a shared living room plus WAF ! However now I am pretty happy with the choice made in conclusions I will say" cables do matter "they may not be better or worse except for very cheap cables but good quality cables with different geometry, and materials do sound different " measurements do not tell the whole story ! just my 2 cents worth!
B

What is it that makes cable phools ramble on and on so much without taking a (paragraph) break?
S

You are 100% correct.
However, there are a few other considerations such as cable construction, terminations and, yes, appearance that also come into play for many buyers. How much someone is willing to pay for those secondary considerations is entirely up to them! It comes down to this; a chair is a chair, once you get by the fact that its built to take a certain amount of weight and has a modicum of comfort why would one cost 50 dollars and another 5000?

Edgar Betancourt said:
Not if someone wants silver cables! That is in fact not the most expensive ones select silvers of 8 feet are 23k! Everyone is entitled to their own frivolousness! Its akin to a gold toilet!
Click to expand...

The price of silver must have really gone up since I last knew...
E

lovinthehd said:
Why in hell would you need silver cables? Jewelry is nice but inside an insulator out of sight is kinda silly. Or are you going to enlighten us on some sonic properties of silver?
Click to expand...

No one can deny that silver is a better conductor than copper, its science. However anyone that knows that will also know that the difference in conductivity as regards to a speaker wire is infinitesimal. Kimber being the savvy marketman knows that graphene is even better than silver and is now selling a new line of products called carbon which is still simply copper wire covered by "electrostatically dissipative material" (AKA plastic) that happens to be black instead of clear and must have some magical properties since no electrical specs are to be found anywhere. IF YOU BUILD IT THEY WILL COME...(and buy)
E

Pogre said:
The price of silver must have really gone up since I last knew...
Click to expand...

Its exactly 10 times that of copper, I checked it!

Gene also uses Kimber speaker wires, and his RBH Status Acoustics speakers have Kimber wires on the inside too.

Edgar, oh and BTW, welcome to the forum !!
E

My point exactly they do have decently priced stuff too, you just have to keep your eye on the prize and not be distracted by the shiny stuff on the shelves of the checkout line!
You must log in or register to reply here.
Share:
Facebook Twitter Reddit Pinterest Tumblr WhatsApp Email Link