How do I hook up a separate VCR Recorder & DVD Recorder from cable TV w/o S Cable?

I typed my question into Yahoo and this group popped up so decided to join.

I'll describe in detail what I spent a few hours doing yesterday and what I'm stuck on.

First off I have a Hitachi Solid State TV that is pretty old and a Sanyo VHR-H600 VCR and a Toshiba D-R7KC.

I have basic cable and a cable cord comes out of the wall with that pocker wire in the middle. I took that and stuck in a 3 way splitter so the cable cord goes to the in part and then from the 2 out parts I put a cord in each of them and one goes to my VCR VHF/UHF from Ant in and the other to my DVD Antenna In.

This is probably way more complicated than it's supposed to be but this is what I figured out.

I looked at the manual for my Toshiba D-R7KC video recorder and it says to take the red/white and yellow audio/video cables and plug them to the video/audio out of my VCR and then put the other end of these into the L1 of my DVD video/audio in and then take a S-video cable going from the VCR video out to the S-video in of my DVD Recorder. The big problem is my VCR has no S-cable jack on it.

Yesterday I was so frustrated I called around to a few places like London Drugs and Source Circuit City. London Drugs said ages ago you could buy a box at Radio Shack to do this. Then Source by Circuit City and the first person I spoke to said I needed Y adapter with a switch. I went online to see what he meant and couldn't find anything that looked like it would work. I called back and the second person said I needed a 4 port switch and I went online and couldn't find one. Without a visual I am so confused.

Is there any way to make this work with what I have or what exactly do I need to buy?

Right now I basically take the red/white/yellow cables from the TV video/audio in and switch them between the audio/video out of the VCR or DVD which is a pain.

This is really long I know but I'm trying to explain it the best I can. I love my VCR recorder and use it a lot but also want to use a DVD recorder as well and want to make this work if possible.

Welcome to the forum!

S-video is just another way to transfer a video signal. If you are using the yellow RCA video jack (called "composite" video), then you don't need the s-video connection. So, don't worry about that part.

It sounds like you already have outputs from the VCR and the DVD going to the TV - that's the second set of coax connections that you mentioned. Your VCR should have something like a "TV/VCR" switch on it that would allow you to output the audio and video from a tape to the TV over the coax line, and you'll need to have the TV set to channel 3 or 4 (my guess) depending on how you set the VCR up. The DVD recorder might have something similar.

There are several ways that this can all be set up. None of them will be difficult or expensive to do. We'll just need to explain them. Before starting, I want to make sure that I understand, so let me know if the following is correct:
Is there anything that I'm missing? Do you have a separate stereo or surround sound system that you use to listen to TV, tapes, or DVDs?

EDIT: I might have misunderstood the s-video portion of your post. I'll see if I can find some more info on those components.

Thanks for the welcome. My VCR does not have a TV to VCR switch but it has a channel 3 and 4 selector. Everything is done on channel 3.

I'd love to be able to do all that you mentioned but wasn't sure if:

that was even possible but that would be great.

I forgot to mention one thing. When I turn my TV on I have to hit AVX on my remote to get the DVD or VCR menu on (after switching the audio/video cables. Right now it's on the DVD part since I just bought it yesterday from Future Shop and want to use it during my 30 days to make sure all is working well).

Let me think for a few minutes on how I'd do it, and I'll get back to you.

The TV/VCR switch wouldn't be a hard switch on the VCR - it would be a button on the remote control (and probably on the main unit as well). That function allows you to record one show while watching something else on your TV - and it would help set up your system a bit easier. I'm trying to find some info online about that unit, and I'll let you know what I find.

Okay, here is one of the ways that you can hook things up (there are certainly others). This is assuming that your VCR actually does have something like a TV/VCR button on it. To start with:
That should allow you to watch cable TV without having either the VCR or the DVD recorder turned on. Without the splitter and combiner, the signal may even look better. It will also let you record TV on the VCR and record TV on the DVD player. It will also allow you to watch VCR tapes on the TV and record VCR tapes (that aren't copyright protected) on the DVD recorder, but I'm almost positive that you can't listen to VCR tapes in stereo through the coax line (unless things have changed over the years).

Next:
That will allow you to watch DVDs on the TV.

Thanks, yes I do have TV/VCR button on my remote for the VCR that allows me to switch from what is being recorded or watching something on TV.

Also my new DVD recorder remote has an input selector button on it as well.

I too will try and find my VCR online as well and post if I find a link.

Firefly said:
Thanks, yes I do have TV/VCR button on my remote for the VCR that allows me to switch from what is being recorded or watching something on TV.
Click to expand...

Excellent! I figured that it did, but that makes things easier.


Firefly said:
Also my new DVD recorder remote has an input selector button on it as well.
Click to expand...

That will control which set of audio/video inputs you are using on the DVD player, but it doesn't work like the TV/VCR button. Your DVD player can't output its own audio/video signal through the Antenna Out coax line - that line will only transfer out the TV cable signal that came into it.
F

I just found the link to my DVD recorder but have to post 5 times before I can paste it here.

I can't seem to find the manual for my VCR but I can scan the pages from my manual that show the front, back and the remote and upload the image here.
F

Earlier I had this idea that I could take the audio/video cables and take them off the back of the TV and put them in the audio/video out of my VCR and then in the L1 audio in of my DVD recorder but that didn't work either.
F

Here are pictures of my Sanyo VCR

Front of the VCR Unit: 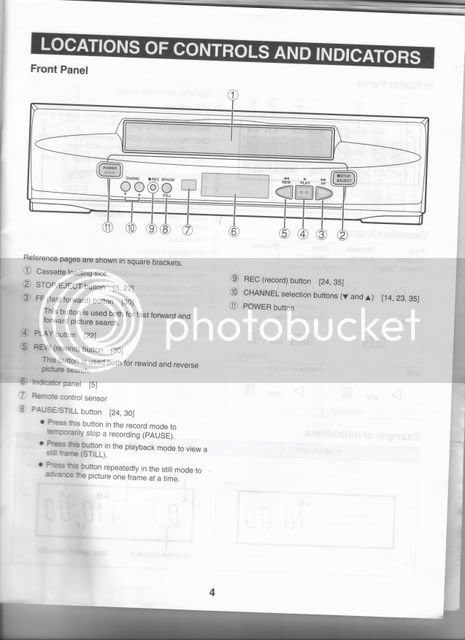 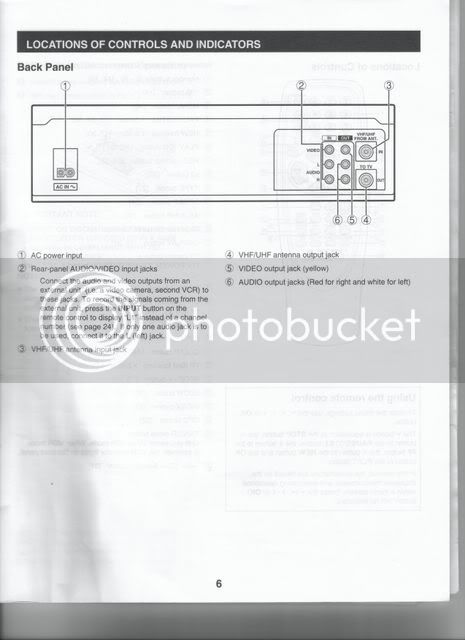 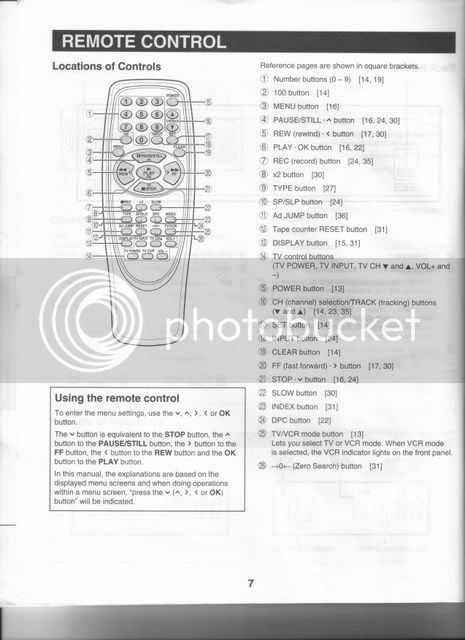 I missed your post earlier of how to do things so will try what you suggested and see what happens. It certainly sounds easier than how I have things rigged up now.
F

You are a genius. Thank you so much. I didn't need any of those splitters or extra audio/video cables.

To think I spent about a few hours yesterday trying to figure this out between my sister and I. She was able to help somewhat but I'm more technically minded.

I never would have thought of this but figured there was an easier way. The guy at Circuit City was telling me I had to buy a $40.00 4 port hub switch.

Just now I played the VCR Recorder and recorded with it and just had to use TV/VCR on the remote. Then I played the DVD Recorder and used the AVX on my TV remote to get that playing. Tonight I will try recording with the DVD recorder.

I'm so happy, you have made my day.

Awesome! I'm so glad that worked out for you.

I think that the only potential downside is that the VCR tapes won't play in stereo through the coax connection. So, if the sound seems lacking, let us know. We'll help you hook up the audio and video from the VCR to both the DVD recorder (if you want) and to the TV. I hooked up my parents' VCR and DVD player to a single input on their TV using some inexpensive cables, and it's worked great for them for years.
F

Thanks, I'll experiment tomorrow after work. I don't think the sound was as good as it was before so I'd love to know the options for that. It's not hooked up to a stereo but I remember it was much better quality when I had the audio/video cables hooked up the other way.
You must log in or register to reply here.
Share:
Facebook Twitter Reddit Pinterest Tumblr WhatsApp Email Link