I had a power supply go bad a few years ago. It was replaced at a factory H/K repair center. Hard to remember now if my current problem started as soon as I got it back, but Think it was shortly after

It presented as randomly getting static in the main speakers (I only run it as 3 ch plus multi room, no rears). I could also be in the center, but most of the time its just on stereo.

Then it would sometimes not allow any audio to flow through to the mains, but if I was sending a source outside to my multi room, that would keep working (sometimes I could get it turn on, no music inside, but the multi room feature would still work, leading me to think that the amp for the mains was the issue.. but... its not due to my 6ch test below).

I've checked for connections on the top DSP board, but can't seem to get anything solid as far as a loose connection.

Spent some time today trying to see what causes what. Oddly, just tapping on the counter where I was testing was enough to cause static. Check out the videos in the link. Same happens when I tap the rear of the unit.

If I plug an analog source into the 6ch direct, it seems to work much better. (no chance of static). Though when I set it all back up, it was very quiet. A few taps on the side of the unit, and its now been playing at a normal volume for an hour without any issues.

If you look at the Optical output on the front or back, you can see the red light flickers. When it looses audio completely (DSP on, not 6ch) the optical will turn off. Leading me to think there is some sort of a power issue in the DSP board.

So far I haven't found anyone willing to work on this. I'm not qualified (I'm handy, but don't know my way around this type of beast). Looking for some guidance on what it might be, where to send it, etc.

I'm in Vermont, so NY or New England preferred.

I can't post the link yet (need 5 posts) so if someone can start a conversation here, eventually I can post the link to the videos.

Hmmm.... The 7300 was a big beast and had a lot of real power output if I remember.. The 1 problem I recall was the vertical fuse board inside next to the power transformer. Apparently due to the high internal heat the contacts holding each fuse would loosen their tension resulting in intermittent contacts and occasional voltage drops... The fix was to pull the 7300 out, NO power connected, take off the top cover and patiently remove each of the fuses and using long-nose pliers gently rebend each fuse contact slightly.
I hope that helps U, the 7300 was 1 incredible product in its day I recall it was the 1st AVR in the industry that had on-board Faroujda video processor for upscaling for each source input. HK had some industry breakout features in their AVRs, too bad they have left the category....

Thanks M Code - that sounds like it could be the issue. I'll see how easily I could get to that vertical power board.

I appreciate you saying it was an incredible product in its day. That's 99% of the reason I don't want to scrap it. While it doesn't have HDMI, it does have a ton of power and features, and yes, upscaling for each input.

photos.app.goo.gl/puWv9cvb5tF39AHP9 for the videos
P

M Code gave you something to check, that's worth trying for sure. For maximum safety, be sure to do it with the unit unplugged, and wait for the filter caps to fully discharge before touching anything. If that does not work out, for a unit that old, it is not worth repairing unless you can use it as an integrated amp or power amp. Any mid range AVRs of today will have much better upscaling and upconverting capabilities now. As an integrated amp or power amp though, it will still beat anything you can buy for less than $1,000.

Before you open it up for further checking, I suggest you try using the analog inputs and pure direct mode, just to see if it can work as a straight integrated amp without problem. If you use the multichannel (7.1) analog input group then you can even verify the individual channels to find out if the issue is universal or localized to just 1 or more channels.

I just checked my S&V bench tested based AVR output power comparison chart, the AVR7300 would rank within top 3 or 4 on my chart in the 7 channel driven criterion, but didn't make the top 10 in two channel driven into 8 ohms or 4 ohms at 0.1 and 1 % THD. Not surprising, given the emphasis they put in the ACD capability that's not very useful for practical purposes but it was their choice in those days, and had, still have many believers as well.
Last edited: Apr 29, 2019
L

I added another photo of what I guess is the power supply board it has four fuses on it. But it's not vertical as you stay in the first message. Are there other boards I should be looking for. One of the tabs on the fuse closest to the front panel was loose and it looks like the fuse has been replaced once. The two on the right hand side of the unit look like the originals with the little red glue still on them as does the one larger one on the left hand side of that board. Are there other fuses I should be looking to check? 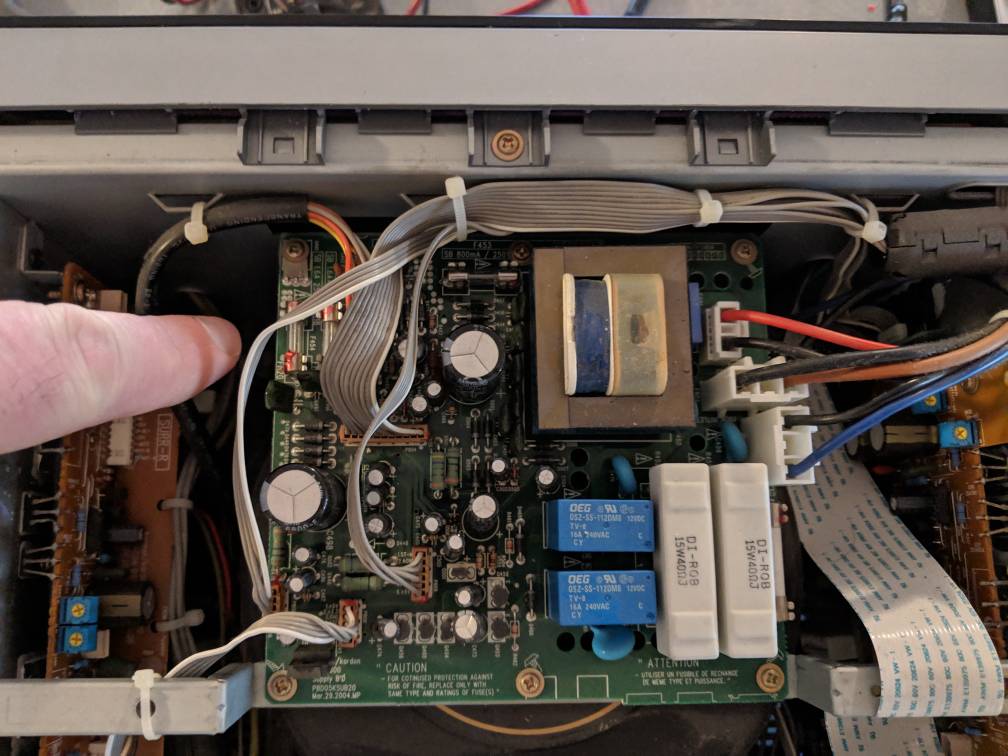 Edit. I can still get static by tapping on the counter in 6 ch with the rear speakers.

Sent from my Pixel 2 using Tapatalk 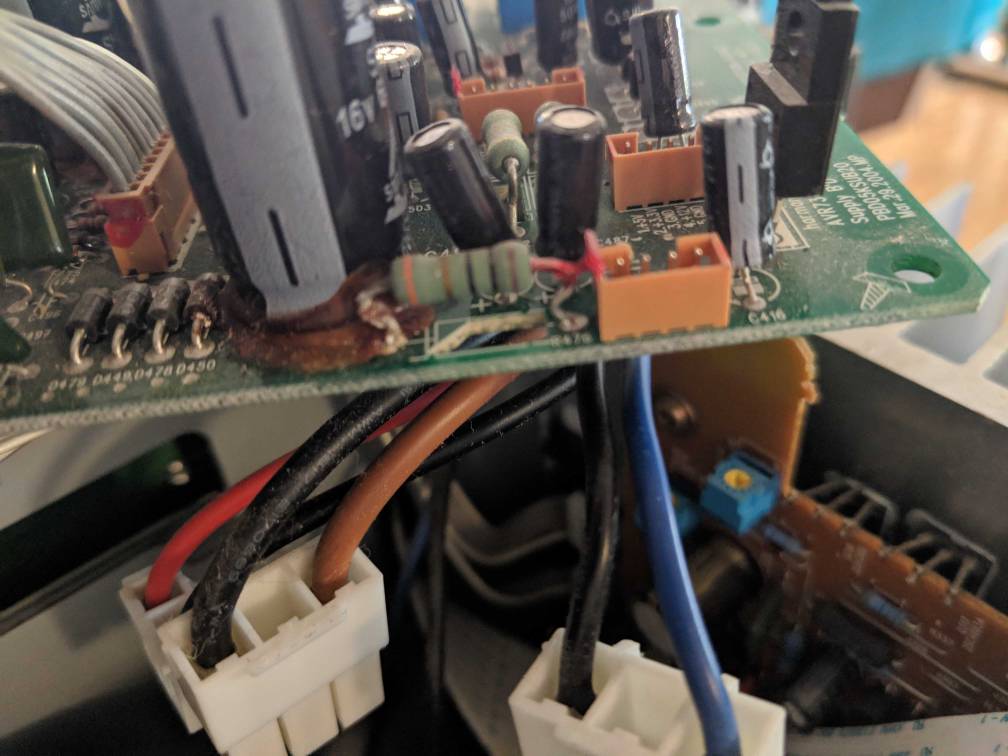 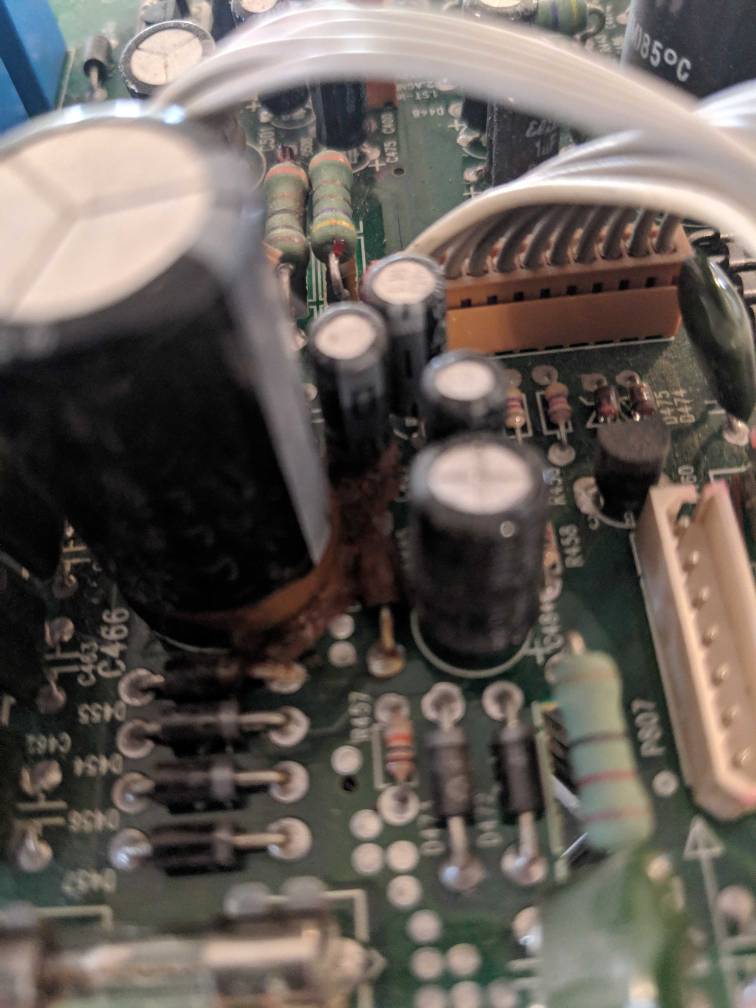 The AVR7000, 7200, 7300, 8000 all used certain common tooling over the years.. We did some of the original prototype evaluation for HK some years back and recalling certain conditions from my failing memory in my senior years. According to some of my dated info the 7300 has (7) 2A 250V fuses on the main PCB. There is the 1st place to check, then next the plug-in cables between PCB as some times they can develop intermittent connections and often gave problems after some years...

M Code,
Sorry for my ignorance - what's the "main" PCB? To me, there are many many boards, none of which look more "Main" than others.

Or, in general, are there 7 fuses "throughout" that I need to find?

You are in luck, the service manual is available on line. I downloaded it but am out right now and will take a look when I get home,a if M Code don't have the info for you by then.
L

Thanks all - Looks like the bottom board is marked "Main" - The problem I have (having not done this before) is, how do I get down to that board? A quick " take it apart in this order" would be really helpful for a newbie. I'm 90% sure whatever is going on is a connection issue causing a voltage variation that then ultimately shuts down the DSP board due to that fluctuation. If its a loose fuse, that would be wonderful!

Thank you for all the help thus far! I'm determined to figure this thing out!
P

Liamfm said:
Thanks all - Looks like the bottom board is marked "Main" - The problem I have (having not done this before) is, how do I get down to that board?
Click to expand...

That's the one, it is indeed the bottom one of a stack of 4 PCBs.
According to the service manual, see P.53, there should be

- Eight 2A fuses (F200 through F207) on that board, with the corresponding fuse holders obviously.

So if you are going to check all fuse holders to ensure they are all tight, you need to access both the Main PCB and the Supply PCB.

There is an exploded view diagram (Page 60) that may help you locate the boards. It doesn't look like too difficult to disassemble them as it shows 4 screws on the DSP board on top, and then a bunch of stud standoffs that holds the others underneath.

Based on the symptoms you described, it is worth checking all the connections you can get to, not just fuse holder clips but all kinds of connectors, as well as checking for signs of bad solder joints.

Link to download the service manual if you have not done so yet:

Okay, I went all the way down to the main board. I'm not sure how those fuses work (more photos here: photos.app.goo.gl/puWv9cvb5tF39AHP9). I couldn't pull any of them out, if that's how they work. Didn't seem like any type I'm used to (glass tubes or auto style blades).

However, I think the real problem is in one of the side board connections to the processor board (2nd board down, below the DSP).

Take a look at the video at that link above. One of those tiny white connectors on the side doesn't clip in. And it didn't "pop" out when I pulled the board off either.

Trouble is, I think the little nubs that are on the processor board side are worn/broken/whatever. I assume that would mean either a resolder of a new connector, or a new processor board?

Thanks - I'm just assuming (big guess) that my problem is in this tiny connection.


EDIT: did a bit of tweaking on that one connector - its holding now, but not as "snappy" as the others. I put it all back together and it didn't catch on fire! Its been running, pushing just 2 speakers, for the last hour without any issue. However, before moving it, I did the "pound the counter" test again and I could still get a "pop" in the speakers when doing so. So the problem isn't gone, but it is better, for the moment.
Last edited: Apr 30, 2019
Z

Watching your photos carefully, I noticed that one of the electrolytes was a defective C223 (on the base panel). See also fuse next to it F205 (cracked case). 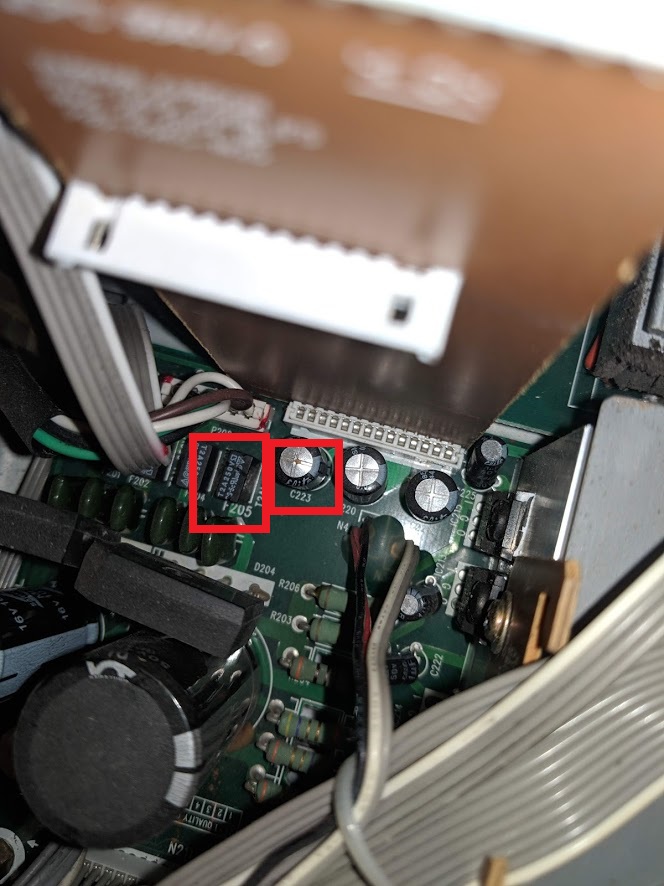