I want a powered soundbar for my living room with 3.0 channels without a separate subwoofer. The TV is for casual viewing and I care more about aesthetics than having a separate subwoofer and surround speakers and I am content with high quality stereo with OK bass rather than paying for poor quality ATMOS or simulated surround sound. Basically I have some money to burn and want the best standalone sound bar. I found the B&W Formation Bar and MartinLogan Cadence but I'm having trouble choosing between them.

The B&W only has optical input but has 3 forward facing channels, each channel with two 2.5" and one 1" speakers.

The MartinLogan has HDMI and can be mounted above TV, below TV, and on a table (where it is placed flat instead of upright) and has 3 channels with 3 speakers each. The strange thing is all 3 speakers in each channel are the same size and pointed in different directions and I have a suspicion that only 1 speaker in each channel is active in any mounting position, based on which speaker is facing the viewer and I don't want to buy 9 speakers and only use 3.

What are your opinions and I'm also open to other soundbar suggestions. I linked images of the speaker configurations of each soundbar below. 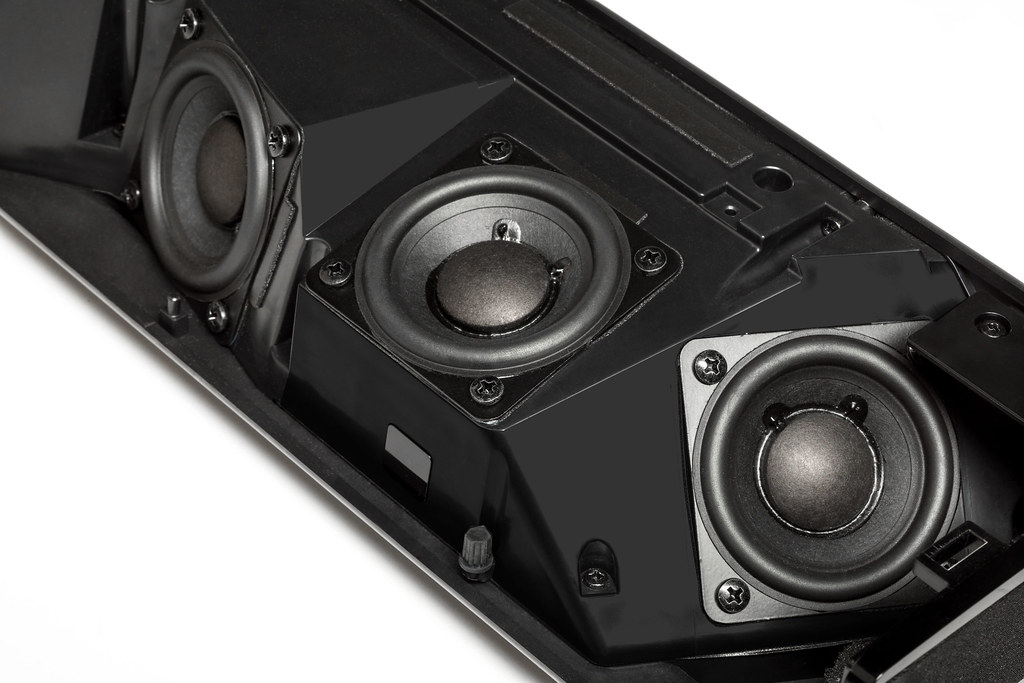 Have you listened to either to get an idea of their capabilities?

I have not heard them but from looks and specs alone, I would go with the B&W. It's probably the best looking soundbar out there (all of their formation series looks awesome). The major strike, as you mentioned, is the lack of HDMI input, but not a total deal breaker. The ML has ARC, which is interesting and I like the different configuration capabilities, but I've never been a fan of full range drivers. So... Not a whole lot of help from me!

I have no interest in either one, but a quick scan shows me that the ML does surround decoding, and that’s why the drivers are pointing all over. The BW seems like it’s more straightforward 3.0.
Personally I like ML better, but in your case, it seems like the BW would be better. Also, klipsch makes some SB’s that people seem to like. But iirc, they are designed to work with their subwoofer.
P

John Parks said:
Have you listened to either to get an idea of their capabilities?

I have not heard them but from looks and specs alone, I would go with the B&W. It's probably the best looking soundbar out there (all of their formation series looks awesome). The major strike, as you mentioned, is the lack of HDMI input, but not a total deal breaker. The ML has ARC, which is interesting and I like the different configuration capabilities, but I've never been a fan of full range drivers. So... Not a whole lot of help from me!
Click to expand...

I haven't had a chance to listen to either of them as I'm early in the research phase.

This is a tough crowd for sound bar advice, lol.

pplshero54 said:
I haven't had a chance to listen to either of them as I'm early in the research phase.
Click to expand...

You really should listen before research since it's a soundbar. I say that because I've heard a lot of them (and own a Yamaha one) and most, if not all, suck big time and aren't worth the money.

However, since your only real option is to listen in a huge room in a big box store they really don't have a chance to sound good. If you can get them in a real room then you should have a much better experience.

I tried the Klipsch Bar 48 and was really disapointed in the Voice channel it didn't have any volume controls for channels, I had tried the Samsung QR70 first which sounded better but had an open box issue that I didnt want to deal with so I ended up with the Samsung QR80 which I'm really happy with. Nothing will replace a complete system but this thing is impressive. I have it mounted under the TV on the wall but it could be table top as well. I honestly don't really hear any real surround effect but it has good over all sound and great voice/center. It has HDMI ARC and is easy to use with a number of sound mode options. It was $1000. It came with a sub but I dont think you need to use it. I didnt listen to the other ML or B&W sb's because I wanted a sub to supplement the sound.

This isn't the advice you want (but it is good!), because you probably really don't want to purchase, or find a location for, an A/V receiver. Last Fall I started looking for really, really good soundbar, my budget was large (for a soundbar) because I wanted good sound and I figured anything I purchased would be less expensive than a good 5.1 or better, system (but the furniture in and layout of my family room is not suitable for a 5.1 system). What I've learned is, if you are really serious a passive soundbar is miles and miles better sounding than an active, regular, soundbar, at any price. I'm headed toward one of GoldenEar's SuperCinema 3D Array passive soundbars (because I like their design and ribbon tweeters) but several other high-end companies also make passive soundbars. If you go the passive route, I'd go with the Golden Ear soundbar and never look back.

Right now I'm using a ten year-old Boston Acoustics TV2 soundbar that cost $299 (and was probably designed 15 years ago, not that doing two analog channels was complicated then, or now). It's analog, 2.1 with a wireless mid-woofer in a plastic box (can you really call it a sub if its speaker is 4" in diameter?!). On the back there is an input for power and one measly pair of RCA analog interconnects. The thing is, it provides the depth and realism one can only get from analog; I've not listened to any "real" digital sound bar that does faux surround where the sound extends more than an inch or two behind the television. Sure, there are a lot of things my cheap soundbar won't do, but it does at least lend some realism when watching most television programming with content that is not 60% or more gunfire and explosions. If an ambulance siren is a little left, and way behind the picture on the television, I do have to look out the front window to see if the sound is coming from my street, or my programming. You can really tell the difference when watching a show where people actually think about recording and playback quality, like "Mystery Road" from Australia, or a show of which I cannot remember the name, set in Iceland with subtitles.

This is the problem with almost any sound bar at any price if you are serious about good and realistic sound as opposed to bad sound coming from many directions:
it is nearly impossible for a manufacturer to put in a sound bar
a quality multi-channel DAC,
a good multi-channel surround processor,
three or five or some other prime number of not-crap amplifiers (so, not Class D),
and several great speakers,
all for less than a grand or two, and make a profit (and sell more than a few of them).
Oh, and room correction - we need that too!
All in one box?
And wait, it also comes with a subwoofer? All for $900??? Which sounds like a lot to pay for a soundbar, until you start thinking about it. (Well, the more expensive sound bars don't come with subwoofers, the $900 active sound bar usually requires a $900 sub to go with it, if a person requires a sub.)

Basically I have some money to burn and want the best standalone sound bar.
Click to expand...

GoldenEar, Paradigm, Martin Logan (Slim), and Klipsch make passive soundbars, to name a few; if you have some funds and are really serious - and somehow have a place to put an A/V receiver (they're a lot larger than a TV box and ROKU box) - the passive 3.0 or 3.1 soundbar system is the only way to go. I read the passive SuperCinema 3D array (shown below) goes to 80 Hz; that sounds sufficient for what you have described. I love the performance ribbon tweeters give, and Sandy, the owner/designer, is a good and enthusiastic guy. He is doing something with the two speakers on each side that make for an extremely wide stage (considering it's a dang soundbar). Plus, every year The Absolute Sound praises (and gives awards to) his floor-standing speakers and subwoofers; my theory is there was a heap of R&D put into this soundbar's speakers and crossovers that didn't have to get reflected in the price! And it's not that much more difficult to run three analog speaker pairs to the middle of your soundbar rather than one digital HDMI cable! (And the passive soundbar requires no power source.) 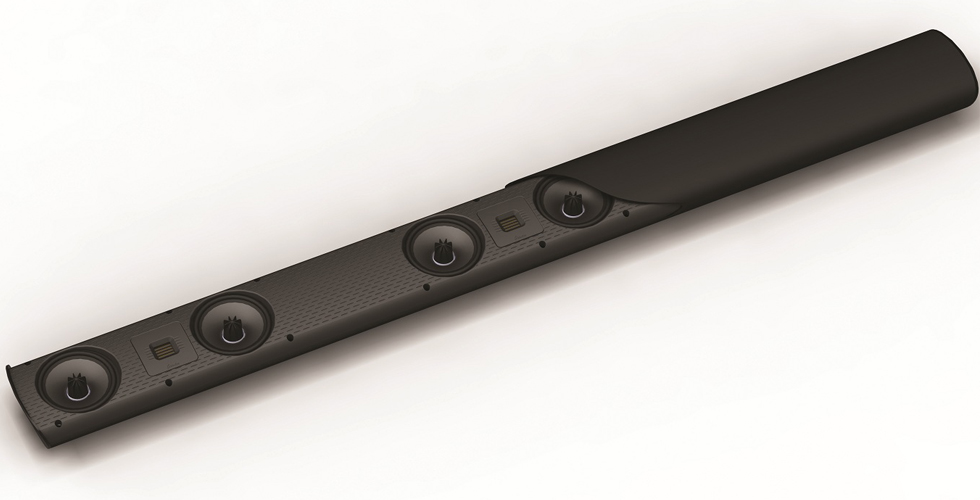 If you REALLY can't be bothered with the hassle of finding space for an A/V receiver, for me the ARC Room Correction offered by the active Martin Logan soundbar would tip the scales in its favor for me (and their reputation, hopefully that is still worth something). I've only heard room correction done a couple of times, but it is amazing the difference it makes if you have a crap room layout like I do.