zieglj01 said:
As the Ebay inventory decreases, the price will go up
Click to expand...

No doubt....The one seller on ebay seems to have all the current stock as well.

Okay, so you're sitting at home grinning like the "cat who ate the canary" listening to these great sounding speakers!
I have to say this is the best value I have ever seen for speakers!!!
What now, you ask?
Get one (or two) of these (while selling for $100ea):

Based on my experience with my SUB R12, these will give you great sounding bass for music.
Do not look to them to rumble your sofa when the depth charges go off - IMHO, if you want that and the precision needed for quality music reproduction, the price for entry goes up to $510 for the Hsu VTF2 mk5 (and still no power player for that LFE rumble).

Obviously, these will add lots of welcome bass for HT, but not at a HT level!
They do seem a perfect match for the TP160's for a sweet 2.1 or 2.2 system!

Note: the Infinity SUB R12 is available for $200 which is a great price, but I would be inclined to get two R10's over a single R12. Dual subs play nice!

Since early September 161 sets in cherry have been sold

zieglj01 said:
Since early September 161 sets in cherry have been sold
Click to expand...

Being an older speaker how long do you think the surrounds will last before needing replacing?

kystorm said:
Being an older speaker how long do you think the surrounds will last before needing replacing?
Click to expand...

zieglj01 said:
They are rubber surrounds -- the speakers still have a good life ahead of them
Click to expand...

Missed that in the descripion, rubber surrounds definitely get a thumbs up from me.

Well mercy, this is interesting

I'm more and more tempted to just blindly buy a pair of the towers on a daily basis...

I’m getting email alerts from eBay saying the seller offers free return shipping. The 3 way towers are very tempting with the free return if I don’t like them.

NINaudio said:
I'm more and more tempted to just blindly buy a pair of the towers on a daily basis...
Click to expand...

I'm not sure how blind it is when Dennis Murphy is praising them as beating much more expensive options (he has only heard the TP160S).
See post #672

KEW said:
I'm not sure how blind it is when Dennis Murphy is praising them as beating much more expensive options (he has only heard the TP160S).
See post #672

If I haven't heard them myself it's a blind buy to me! Not saying that Dennis' opinion hasn't made me more inclined to try them out, as it certainly makes them even more interesting to me.

I've been kinda busy lately so I haven't had an opportunity to really do any comparisons, but I haven't forgot!

KEW said:
I'm not sure how blind it is when Dennis Murphy is praising them as beating much more expensive options (he has only heard the TP160S).
See post #672
Click to expand...

Speaking of DCM speakers, has anyone heard the TP160 towers? It looks like one could get the towers for about the same price as TP160S booshelves and speaker stands. The difference should be deeper and more extended bass ... a really good deal...

Pogre said:
I've been kinda busy lately so I haven't had an opportunity to really do any comparisons, but I haven't forgot!
Click to expand...

I had some time yesterday so I took down one of my surrounds and paired it up with the center for a shootout. 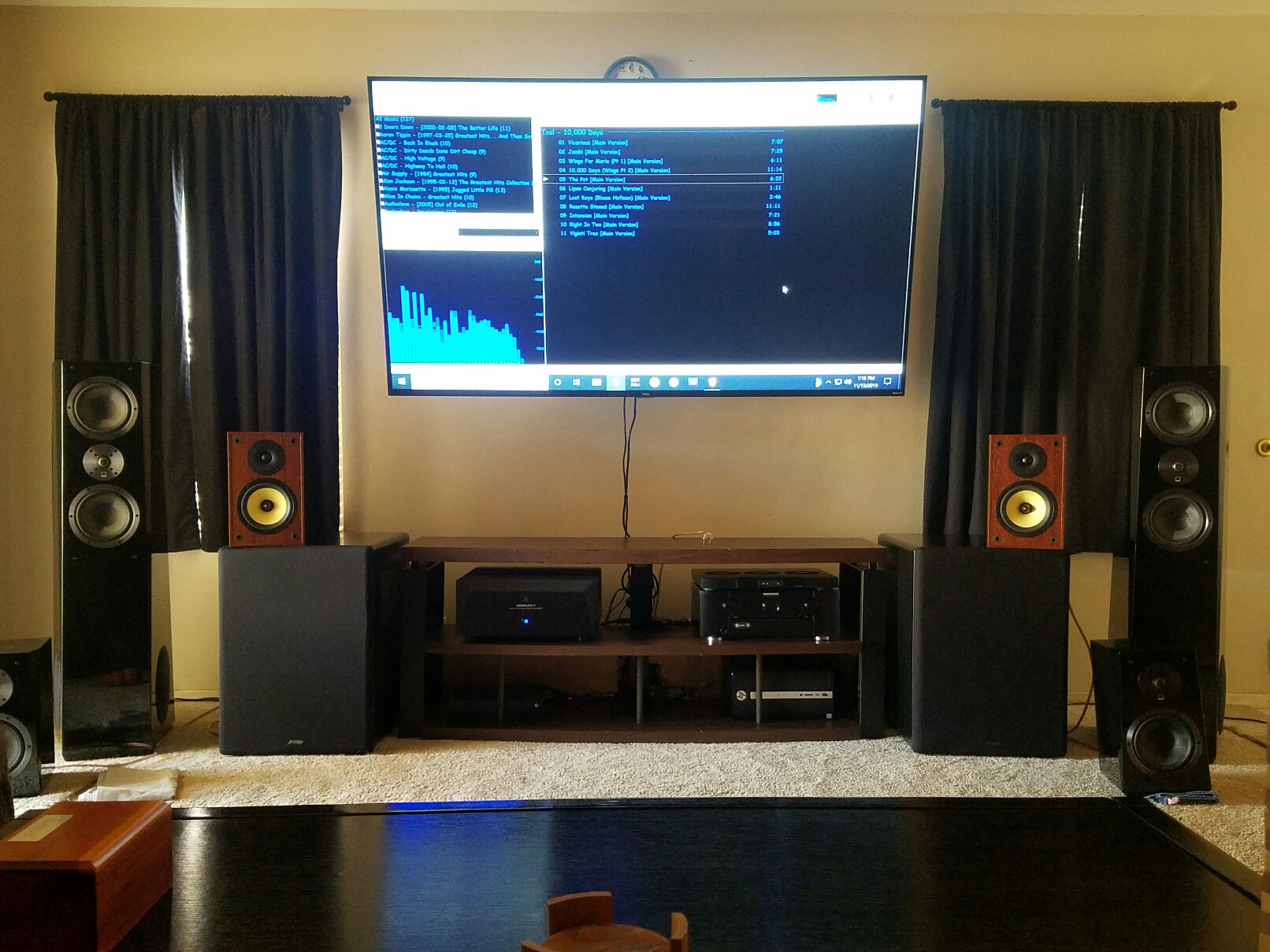 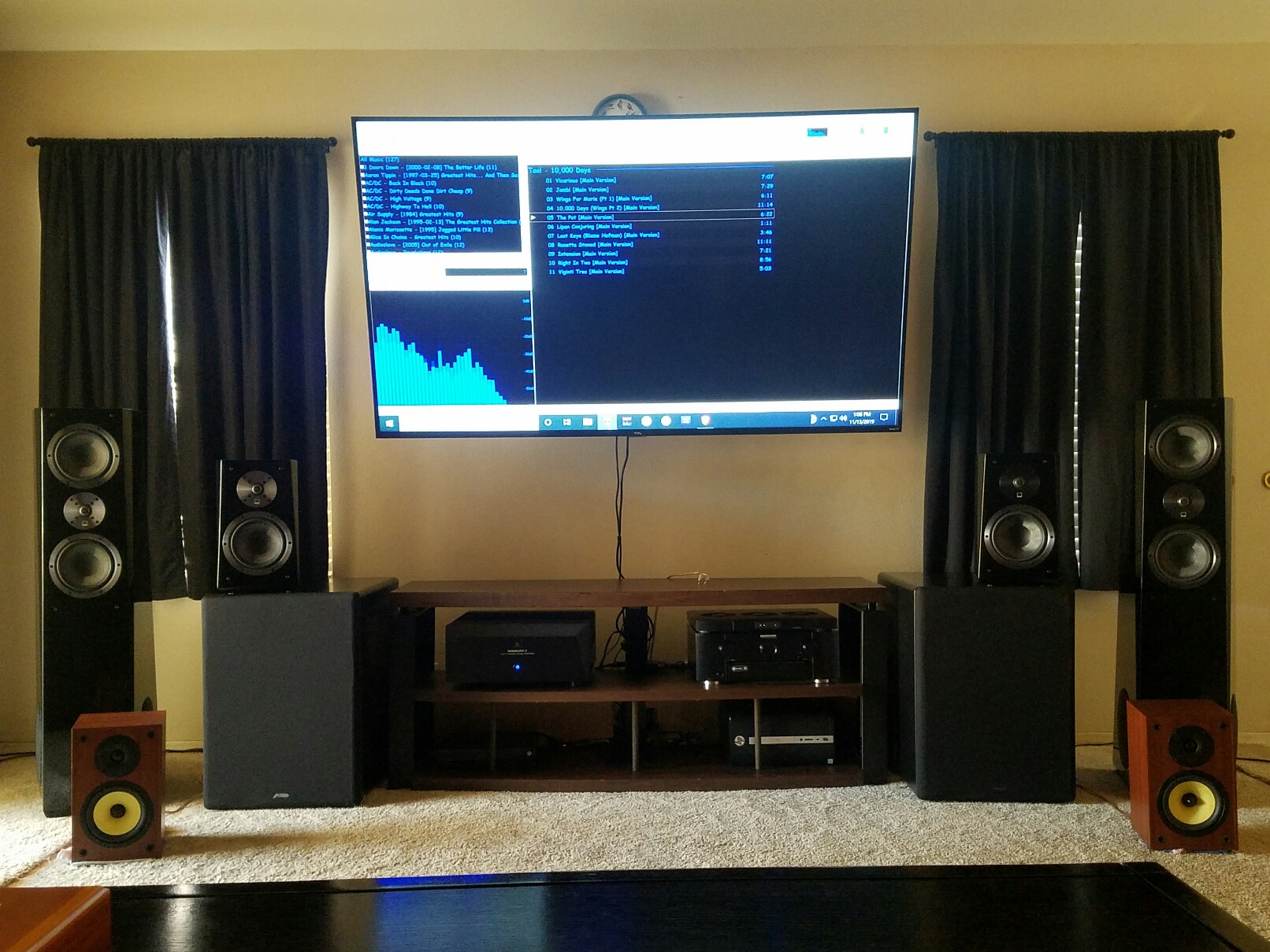 That's the setup.I downloaded a SPL app on my phone and used pink noise I found on youtube to level match. According to the app the Ultras are about 1.5 dB more sensitive, which is interesting because they're both spec'd at 87 dB/2.83v/m... Anyhoo, when I would switch the Ultras in I adjusted the volume -1.5 to keep them as close as I could. I should probably also take this opportunity to mention I am not a professional reviewer or blessed with special listening skills or training, nor did I take any measurements. This is just my strictly opinion based, quick n dirty subjective impression of the TP160S and how well it performs when compared to my Ultra bookshelf speakers.

The DCM is a little bit smaller than the Ultra, but feels about as solid. You can definitely see where a fair chunk of the budget went for the Ultras over the DCMs in cosmetics. The DCMs are pretty plain Jane with an old school looking cabinet (that sound decently inert when you wrap your knuckles on them) compared to the piano gloss black finish of the Ultras. 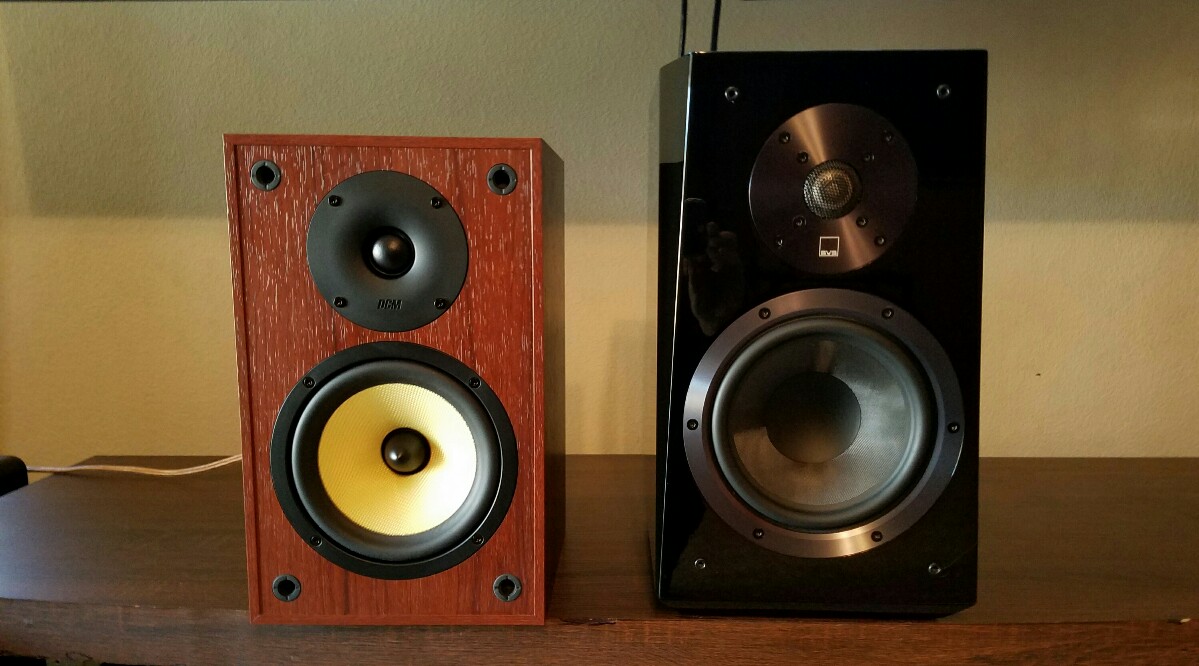 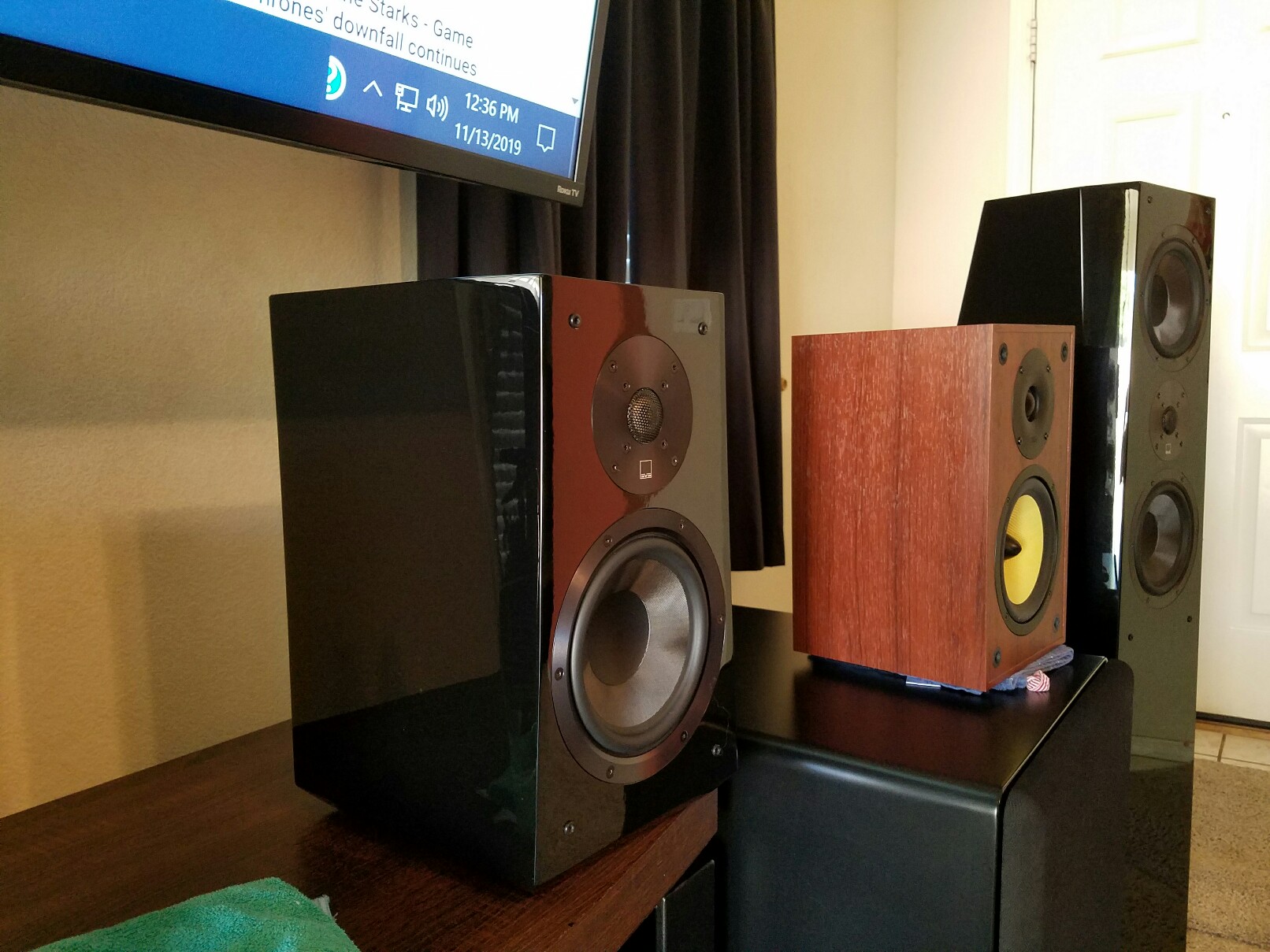 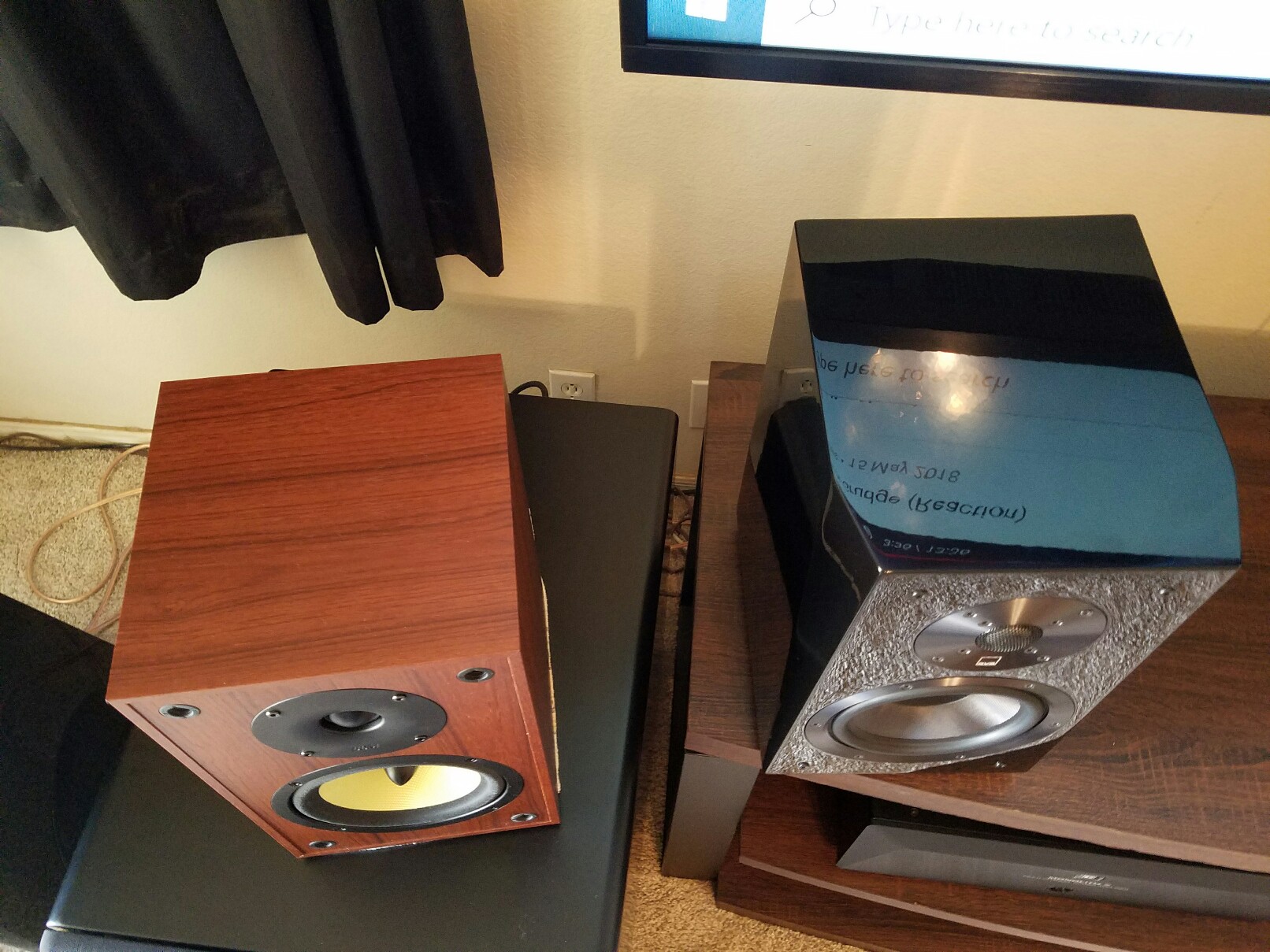 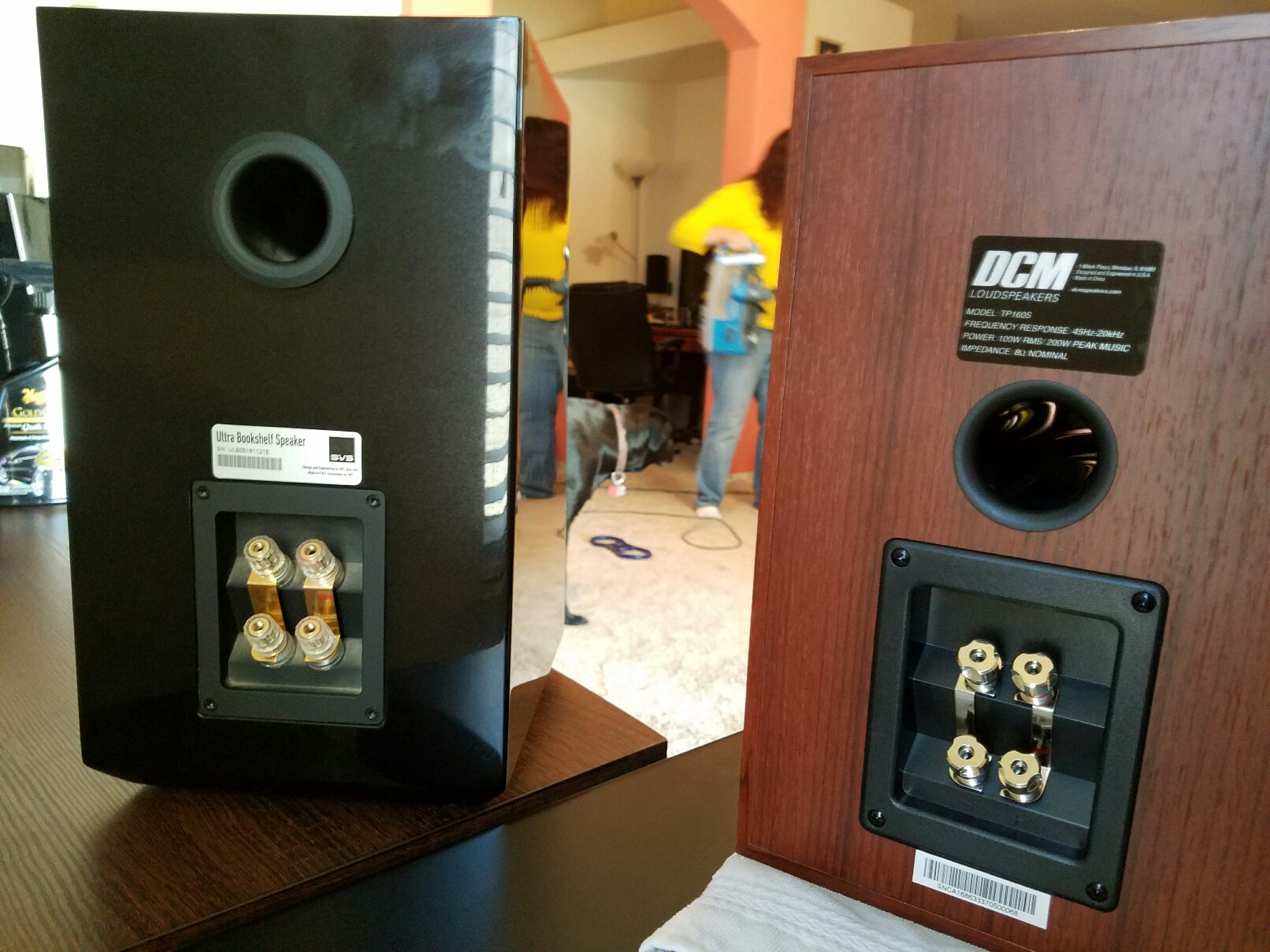 It's surprising to to see dual 5-way binding posts on an $83 budget pair of speakers, lol. For my listening tests I kept the jumpers on both sets of speakers. I wasn't gonna mess around with bi amping for this.

Okay, listening. I tried a variety of stuff with decent, but not subterranean bass because they are only bookshelf speakers after all. I also did all of my listening in pure direct at full range for both sets with no subwoofer. I've been bi amping my towers so I have 2 sets of cables already terminated with bananas for some pretty quick and easy switching. For music choices I went with TOOL, Blues Traveler, Eagles and several songs from my Chesky's Ultimate Demonstration disc.

This was a closer shootout than it should have been given the difference in cost between these 2 speakers with the TP160S at $83/pr vs the Ultras at $1000/pr. I found the Ultras to have a larger, more open sound, slightly deeper, better controlled bass with more reserved highs. The TPs are brighter sounding, but not harsh to my ears. I do have some hearing loss tho and tbh that brightness comes across as a little bit more detailed for me and is one area where I might even prefer the them over my Ultras!

As far as bass goes, the TPs do very well here also. They sound bigger than they are and even gave me some decent chest thump at volume during Danny Carey's "Chocolate Chip Trip" drum solo. They also image very well. Vocals are dead center, very easy to understand with good instrumental separation and detail. Compared to the TPs the Ultras have a wider soundstage and sound "thicker" (for lack of a better word) without sounding muddy, bloated or sacrificing midrange detail.

I took them up to reference at full range for a couple of songs, which is pretty lively as I sit 14' from my front stage, and they exhibited very good behavior. I think the Ultras maintained their composure just ever so slightly better at high volume, but the TPs never broke up or bottomed out. They did lose some of their composure at volume and sounded a bit strained where the Ultras were asking for more. I could easily see the woofers moving on both sets from where I sit! The TPs did get very loud and took the volume like champs. In fact they got louder than I'd like to listen for any extended period of time before they started sounding strained so I don't even necessarily consider it a knock. I'm very impressed.

I'm trying not to gush too much over the DCMs. It's not just the quality of sound they produce, but the fact that they can be had for this price is just crazy. Yes I still prefer my Ultras, but the 2 share more in common than differences and I had to get a little more nit picky than I wanted to given that I spent literally ten times as much on the Ultras. Where the ultras really shine over the TPs is in mid and lower bass, especially at volume. That's not to say the TPs won't get plenty loud without breakup. They hold their own very admirably. The Ultras do it just a little better.

All in all I do find the Ultras to be the overall better speaker, but they don't blow the TPs out of the water so much as edge them out. I might even prefer the brighter upper mids and treble of the the TP160S while the Ultras really shine with power handling and more muscular sounding mids and bass. The Ultras also seemed to "disappear" just a little bit better too.

Going forward I'll have no problem whole heartedly suggesting these speakers to anyone on a budget. I think anyone new to this hobby who buys these is going to have a hard time finding a better sounding speaker without spending a lot-lot more. It's almost not right. Folks' expectations are gonna be all skewed now, lol. To find a meaningful upgrade from the TPs is not going to be easy to do for under a thousand bucks, imo.
Last edited: Nov 14, 2019

Well said. Power handling and cabinet kung fu always come at a cost. I almost wish I needed a budget book shelf. Back in the day I would have been all over something like these but I think I've become a little spoiled, I'm happy to say.