Hi, i'm trying to find out ways to maximise audio quality from my system. So basically i'm running a 5.1 system connected to my Denon AVR. Even though i'm pretty satisfied with the overall movie experience, i'm still trying to find out if there's anything i could do to bring out the most out of my system within my budget to improve the quality of 2 channel music experience. All my sources are digital (TV, TIDAL via Nvidia Shield) and i have to do it in the same room.

1. Getting a separate Power Amp: Since these AVR's power ratings are not so reliable and i've read from several sources that it's good to separate the amplifying and pre processing to get a clean signal.If i do this i'll still have my Denon as a Preamp and i'm not sure if it'll have any impact for Music. If i do, how much of improvement will i get in terms of audio quality (Not loudness as my listening space is pretty small) and is it worth the extra expense?

2. Getting an Integrated Stereo AMP: Okay so this is a bit tricky for me. Since my music source is only TIDAL via NVidia Shield connected Straight to Denon, is there anyway to practically make both my AVR(For movies) and Stereo AMP(For Music) work together? I understand that i have to connect using the Preout from AVR to Stereo AMP, but it will basically make the Integrated Stereo AMP work like a regular Amplifier right? As in, the audio pre processing will still be done by my AVR since my music source is connected to the AVR. I wanna keep all my sources connected to the AVR and fully make use of the Stereo AMP(both it's preprocessing and amplifier) when listening to music, as well as switch to 5.1 while watching movies. is that possible? Even if it is possible, will it bring a big difference to the audio quality?

Among these 2 options, which is the best way to go? Or is there any other ways to get an even better result? My budget is around 700$ .


I have been trying to find this info everywhere to integrate hifi stereo with a 5.1 setup and all i could get is by connecting the audio source, ex Turn table, directly to the stereo amp and making the connection to AVR via Preout. I wanna keep my AVR as the main hub and listen to music via TIDAL. I'm pretty new to this and It'll be really helpful if you guys could help me out!

FYI, i don't wanna change any of the equipments i'm using as i just got them recently. I'm very satisfied with my Denon for movies and the sound signature i get from my Triangle BRO3's are really good too, it's just i wanna know if i'm missing out on anything to bring out the full potential of these speakers.

I do not believe that you will benefit from adding an external amp. I do believe that Denon 3700 is perfectly fine.

IMO any improvement would come from Speaker Placement, Audyssey, and Room Acoustics.

From the few reviews that I have read so far it sounds to me that these speakers even though they are front ported need to be pulled away from any walls. So again seems that placement is a big factor in the sound quality you'll experience
Last edited: Oct 14, 2020
A

mazersteven said:
I do not believe that you will benefit from adding an external amp. I do believe that Denon 3700 is perfectly fine.

IMO any improvement would come from Speaker Placement, Audyssey, and Room Acoustics.

Thanks for the reply!

Okay, how about adding an integrated Stereo AMP? Will it do any changes?

There really is no practical way to add an integrated amp to an AVR. You’d have to double the connections of source components that would be used by both, and send one side to the AVR and the other to the integrated amp. Then you’d have to constantly move the speaker cables between the two, or put in an A/B switch for them.

Or use an integrated with a theater bypass mode but I’d look at speaker placement first.

Audiophile.no has made a list of stereo preamps and integrated amps that have one sort of HT-bypass. This list is updated 18. september 2020 with amplifiers from Wyred 4 Sound, and will be will be continuously updated. Written by Karl Erik Sylthe, at 15.02.07 Translated to English in june...

The Denon 3600 has significant amp capability for a small room where the listening distance is 7 to 8 feet away. You will not hear a difference by adding a 2 channel amp for stereo OR an integrated amp. I would save your money.

If you want to upgrade your sound down the road I would consider the BMR monitor with RAAL tweeter. You can build them yourself or buy a pair for $1700. 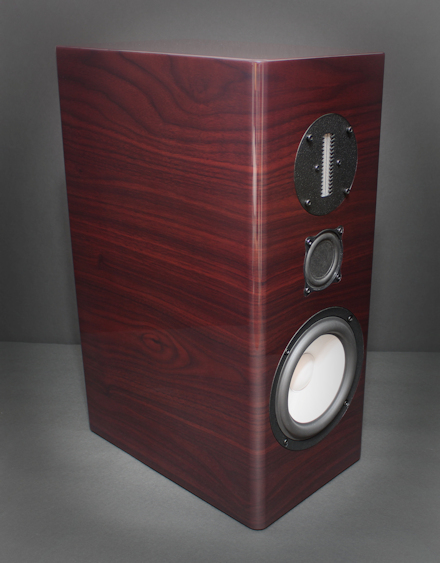 VMPS-TIII said:
If you want to upgrade your sound down the road I would consider the BMR monitor with RAAL tweeter. You can build them yourself or buy a pair for $1700
Click to expand...

So you've heard the Triangle Borea BRO3 and know the Philharmonic sound better???

The normal answers are speakers, room acoustics, setup. Not amps. Settings for two ch can be different from movies, and the avr can accommodate the switch between the two with the press of a button. What settings do you use for music?

I'll echo most of the responses above. Your Denon AVR is rated at 105 wpc when driving 2 channels. Your Triangle Borea BR03 front left and right speakers are rated by the manufacturer as being able to handle as much as 100 watts. Based on that information, I would not seek more power for those speakers.

The manufacturer also claims 90 dB sensitivity for those speakers, which is very sensitive for 2-way speakers with a 16 cm mid-woofer. I haven't heard these speakers, but I find that value is questionable. Most similar speakers have sensitivities in the 84-86 dB range.

Your Denon AVR-X3700H is rated at 105 wpc output when measured at 20-20 kHz, under an 8 ohm load, with 0.08% total harmonic distortion. This rating is required by the Federal Trade Commission for any amp or receiver sold in the USA. I do believe that Denon's rating is honest and reliable.

Doubling the power you now have would only result in 3 dB greater loudness. It is barely noticeable under most conditions. I would not advise this because your speaker are not rated for that much power. It could result in damage. To get significantly more power you would need to at least triple what you now have. Again, don't do that.

ananthvm11 said:
2. Getting an Integrated Stereo AMP
Click to expand...

Don't waste your time or money.

ananthvm11 said:
Among these 2 options, which is the best way to go? Or is there any other ways to get an even better result? My budget is around 700$.
Click to expand...

Neither way, nor any other that involves amps, pre-amps, or any other stereo only electronic gear.

ananthvm11 said:
FYI, i don't wanna change any of the equipments i'm using as i just got them recently. I'm very satisfied with my Denon for movies and the sound signature i get from my Triangle BRO3's are really good too, it's just i wanna know if i'm missing out on anything to bring out the full potential of these speakers.
Click to expand...

Keep what you have now. It sounds to me that you have been listening to a salesman at an audio shop, or the reading the nonsense spouted in many audio magazines or web sites. They all claim that 2-channel electronic audio gear has better inherent sound qualities than good quality AVRs. They also stand to gain by selling you that unneeded gear.

Your Denon AVR is quite good. If you want to listen to music in 2-channel audio, there is no reason why it cannot do extremely well. Keep your money.
Last edited: Oct 14, 2020

Sound Quality
"The Triangle Borea BR03 may look the part, but how does it sound? Pretty impressive, actually. Firstly, this is a hi-fi speaker and not a studio monitor – so if you’re looking for a perfectly flat response with zero coloration, then look elsewhere."
Stereonet 2019 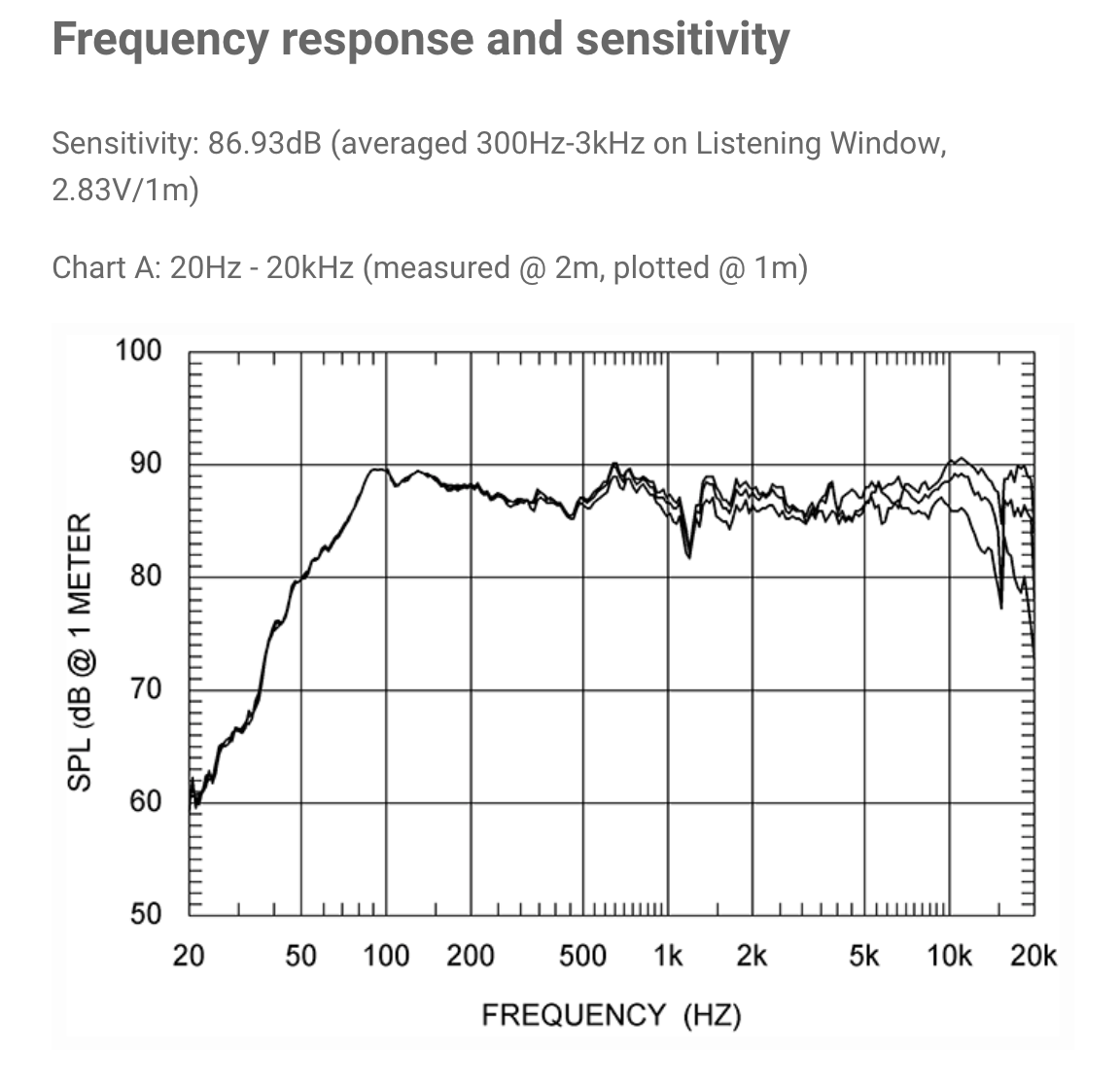 @VMPS-TIII – Thanks for the SoundStage measurements of those Triangle Borea BR03 speakers. Like others had mentioned, I'd never heard of them before.

This may be beyond the scope of the OP's questions, but I have a few comments about those speakers. For roughly $550 per pair, they don't seem bad. In that price range, most speakers I've known had one or several flaws, but this speaker has a mostly decent looking frequency response curve.

The manufacturer's specs say this:

Sensitivity – 90 dB/W/m​
Frequency range – 46 Hz to 22 KHz ±3 dB​
Power handling – 100 watts​
Nominal impedance – 8 ohms​
Minimum impedance – 4.2 ohms​
The SoundStage frequency response curve shows it's bass rolls off steeply below about 80 Hz. So the claim of bass down to 46 Hz just ain't so. These speaker will probably sound like they lack bass. Better bass performance in small speakers comes with a higher price, $900-$1000 per pair, in my experience.

Between 500 and about 1300 Hz the frequency response curve is ragged looking. Above 500 Hz it rises to nearly 90 dB, and then drops sharply at 1300 Hz to nearly 82 dB. To my eye, this appears similar to other small cabinet speakers, about 8" wide, that lack baffle step compensation (BSC). I haven't heard these speakers, so I don't know for certain, but the frequency response curve suggests that there is not enough BSC in the crossover network. Depending on the music, this can result in an exaggerated 'honky' or 'nasal' sound to voices, brass instruments, or any other mid-range sound.

SoundStage measures sensitivity at about 87 dB in the 300-3,000 Hz range. That's not 90 dB, but its not bad compared to other 2-way speakers with similar sized woofers. If my thoughts about BSC are correct, that might explain the higher sensitivity. In a passive crossover, adding enough BSC will lower the sensitivity by at least about 3 dB.

These speakers have a minimum impedance of 4.2 ohms at roughly 200 Hz, but the change in impedance phase angle across that frequency range is small enough to believe these speakers are not a difficult load for most amplifiers, including the OP's Denon AVR.
Last edited: Oct 15, 2020
You must log in or register to reply here.
Share:
Facebook Twitter Reddit Pinterest Tumblr WhatsApp Email Link