I disagree. Do any of the receivers you mention use a massive toroidal transformer? Do they not rely heavily on negative feedback for increased power output? Well hey...if you don't like Audiosource then don't buy one. I just have had very good experiences with the ones ive owned and there are a whole lot of people out there who would agree. Here's one review from Home Theatre HiFi .com:
I remember when AudioSource was a very small company, making just a couple of products. Through hard work and obvious success, they are now a relatively large manufacturer of numerous products, including power amplifiers and subwoofers. The Amp 3 is a two-channel power amplifier, designed with home theater in mind. For $499, you get a very simple chassis. On the front are the power switch, speaker switch (Speaker set A and/or B), and volume control for each channel. On the rear are line in and line out (for daisy chaining) RCA jacks, bridging toggle, two sets of 5-way speaker binding posts, and grounded AC socket for the power cord.

The Amp 3 is rated at 150 watts/channel into 8 Ohms. The heavy toroidal transformer inside is part of the power supply that allows using two pairs of speakers to be connected at the same time, as long as the combined parallel impedance does not result in less than 2 Ohms. 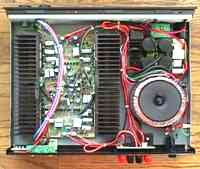 Although you might immediately think of multi-room use with this feature, more importantly, it implies a solid power foundation for those action film sound tracks. It was this fact, plus some readers questions about two and three channel power amplfiers for home theater, and its modest price tag, that prompted me to get the Amp 3 for review.

The measured power bandwidth of the Amp 3 review unit (the highest frequency where the voltage level is down 3 dB from the level measured at 10 kHz) extends to 250 kHz, although AudioSource uses an output RC network to rolloff at about 85 kHz (in their latest production units). The 10 kHz ± 10V square wave response is very nice too.

Quite impressive for a $499 power amplifier. The advantage of a wideband capability is good phase response (less phase shift in the audio band than an amplifier that has a 3 dB down point at, say, 50 kHz). However, if the amplifier is not stable, and the load is moderately reactive, it will see the capacitance of the load as a short at high frequencies (the capacitance acts as a high pass filter), and will oscillate at these high frequencies, causing the amplifier to perform poorly. So, besides the regular speakers, I put the Amp 3 with our Threshold ES-500 Full Range Electrostatic Speakers, which are difficult loads. I was pleasantly surprised to find that the Amp 3 handled these tough speakers admirably. The detail and deep bass were there. Clean, no noise, and enough power to fill the room. Granted, it did not drive the ES-500s to high levels, but even near clipping, the Amp 3 did not flinch. And this was with such amp buster CDs as "Fanfare for the Common Man" on Telarc. The amplifier never got warm, whether using powerful music, stressful sinewaves, or just resting, which suggests only a tiny bias into Class A to keep the six bipolar output devices in each channel from ever turning completely off. Cool running characteristics make this amplifier a good one to consider for custom installers whose clients want more power than what's in most of the multi-room, multi-channel power amplifiers. There is no remote trigger socket on the Amp 3, but a series of them could be turned on with AC line conditioners that have sequential activation, such as the Rotel RLC-900 ($200). The power supply of the Amp 3 has four 6,800 µF capacitors with ± 62.5 Volts DC on the caps. This provides 53 Joules of energy storage.

Well, what about home theater? I connected the Amp 3 to the front left/right pre-outs of our Yamaha RX-V990 receiver, and put on some DVDs. The recent "Terminator 2" DVD release was an excellent test, and the Amp 3 really cranked. Our Krix Esoterix MK-II speakers are a much more friendly load to any amplifier than electrostatics, so I knew that I would get plenty of volume here, but what I was looking for was soundstage. Our Carver AV-705 is quite similar in output rating to the Amp 3, and frankly, I could not tell the difference between the Amp 3 and AV-705, switching one for the other in the front channels. The sound was open and the depth was excellent. The Amp 3 was much better than the built-in power amplifier of all the receivers we had on hand. I expected this, because the Amp 3 has a much more robust power supply and probably a lot less negative feedback than typical mass market receivers. The Amp 3 has a bridging switch that turns it into a 400 watt monoblock, using the left channel input jack, left channel volume control, and the + speaker binding posts of both the left and right channels. This would mean that for $2,500, you could have 400 watts/channel and 5 channels, plenty of power for any home theater (not to mention a total of 60 output transistors!) Don't forget a nice rack that will hold 140 pounds of power amplifiers.

The only complaint I have about this amplifier is the connector plate on the rear. I managed to break one of the input RCA jacks. Of course, we treat review products a little rough because we pass them around to each other and are constantly plugging and unplugging the connectors. But still, this item could use stronger mounting attachments.

In summary, if you are one of our readers who has been looking for a good low cost two channel power amplifier that has simple basic features with no fluff, you should definitely consider the AudioSource Amp 3. For $499, it is one HECK of a deal.

paradiddle33 said:
They (Audiosource amps) are way better than any amplifier section on most affordable A/V receivers and with preamp outputs on those receivers..
Click to expand...

Audiosource is way better than most affordable AVR?

I used to own a HK 5.1 AVR that retailed $499. I would use the amps in that AVR than any Audiosource amp.

But anyway, to each his own.

I wouldn’t let any Audiosource amps touch any of my high quality expensive speakers.

And I bet most AVR have much better speaker-protection circuits than any Audiosource amp.
Last edited: Jan 26, 2019
P

Its a free country, do as you wish. My Adcom has no speaker protection but when those clipping meters go off I know to back off, lest my wonderful Nautilus tweeters be fried. Maybe if you were an authorized dealer of older Audiosource products you would have a less biased perspective. I'm done with this fruitless debate.
Last edited: Jan 27, 2019
P

That sounds like another blanket statement, disagree with what??

Do any of the receivers you mention use a massive toroidal transformer?
Click to expand...

Who mentioned what? Regardless, I did mention mid range and up (meaning higher..) models, so the correct answer is, yes, some do use toridal, as to "massive", that's relative.

If you scale the picture you post, that thing has a dia of about 4.8" and it doesn't look very tall based on the external dimensions of the amp. IMO "massive" is relative..

Also, EI and toroidal both have pros and cons, one is not always better than the other. The $2999 Marantz SR8012 opted for toroidal, yet the $3999 Denon AVR-X8500H opted for an E-I, I am sure their design teams have their own reasons.

Do they not rely heavily on negative feedback for increased power output?
Click to expand...

Depends on how you define "heavily"? Besides, without studying the schematics, it is hard to know? If you go by many available bench tests that included the harmonics contents and other tell tale numbers, I don't recall seeing much signs of the bad effects from the use of negative feedback. The reviewer in your linked review did cautiously use the word "probably", so while we don't know, we can/should only speculate.

I'm done with this fruitless debate.
Click to expand...

As I said in post#9 about the Amp3: "That would be an older model. It should be a good one.." so no debate there, not from me anyway.. But then, you started a blanket statement "They are way better than any amplifier section on most affordable A/V receivers and with preamp outputs on those receivers....." that is simply too generalized, rendering it not factual. By the way, based on what he owned/still own, @AcuDefTechGuy may consider his AVR-5308CI (iirc, toridal(s) onboard..) affordable..

paradiddle33 said:
My Adcom has no speaker protection but when those clipping meters go off I know to back off, lest my wonderful Nautilus tweeters be fried.
Click to expand...

The reason I speak against all cheap amps in general, not just Audiosource, is because guys like TLS Guy have put the fear in me a long time ago.

Now Acuras amps were never cheap. Even 20 years ago a 200x3Ch amp was $1200. But TLS Guy informed me these amps had no protection circuits. So I sold all four amps.

Maybe the $800-$900 Audiosource amps have protection circuits, but I doubt the cheaper ones do.

Again, I am not debating about sound quality - only about whether I feel it’s safer to use for more expensive speakers.

I am talking all cheaper amps, not just Audiosource.

Do you really want to take a chance on using cheaper amps on your B&W speakers?

Of course, protection circuits won’t guarantee, but they help.

I am a “dealer” for some other amps too, but I don’t even “list” them because I would never use them personally.

But I would use amps from ATI, Adcom (sister company of ATI),Yamaha, Marantz, and Denon for any of my speakers.

Now we only expressing our opinions.

I feel that if you are going to use cheap amps, might as well just use the amps inside the AVRs, which have protection circuits.

It seems that you can't believe anyone's specs. I recently bought a Adcom 5300 on eBay. It had a bad power supply rail in the front end. After I repaired it, I put it through its paces. I was surprised that the allegedly 80 watt per channel amplifier put out 128 watts RMS at clipping into an 8 ohm resistive load on each channel. With a 4 ohm load, it put out 207 watts per channel (the rating was 125 watts). All of the Brystons I have tested exceeded their specs, but not by this much. It seems like the 5300 would meet its spec during a brownout with only 95 volts!
You must log in or register to reply here.
Share:
Facebook Twitter Reddit Pinterest Tumblr WhatsApp Email Link