Up to date pix of my systems

Main System: Finally took the time to hang some pictures and finish the HT room up a bit. I also played with the sub placement and found that the Velo sounds MUCH, MUCH better where the Polk was, in fact I have stopped using the Polk at all. Also took some pictures of system 2 & 3.

After playing with multiple preamps & system configs, I have settled in on using the Lexicon for Stereo as well as HT. I am using the Velo in stereo also, in it's new location it fills in the bass perfectly and sounds fantastic. The room is a bit boxy and was eating up the bass from the M3's. But I have never been more happy and content with an arrangement. I usually spend more time tweeking the system than listening, but I am finally just listening with no desire to tweak any more. And let me just say WOW, I am speechless while listening to it. The Carver preamp is there for the TT and the EQ was an experiment, but I am not using it and will be removing it. 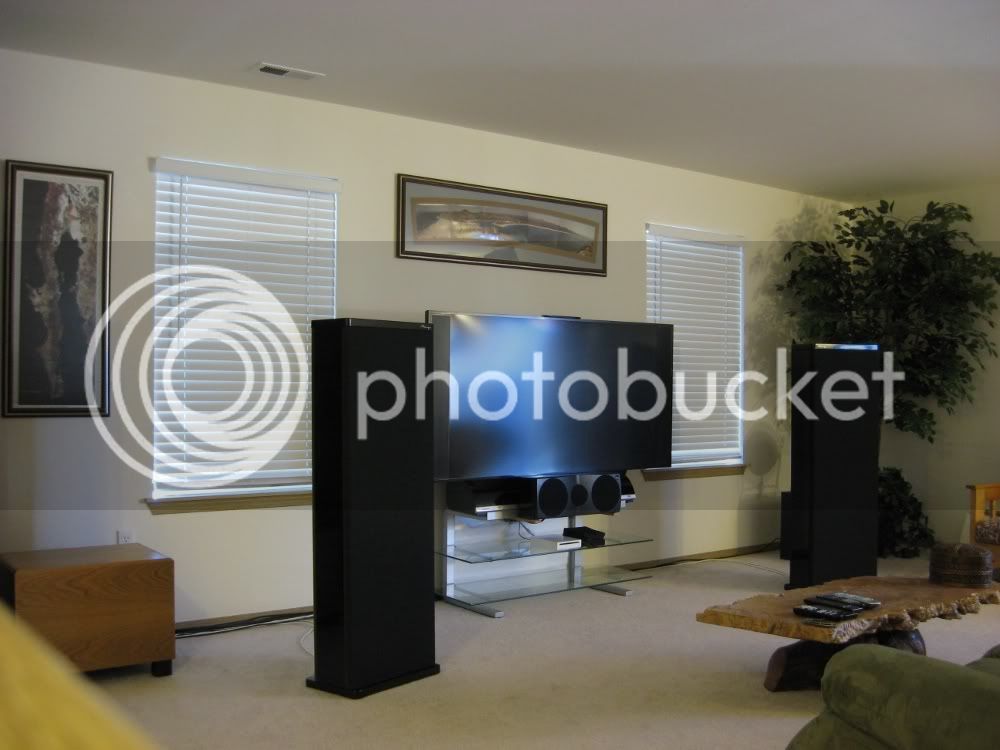 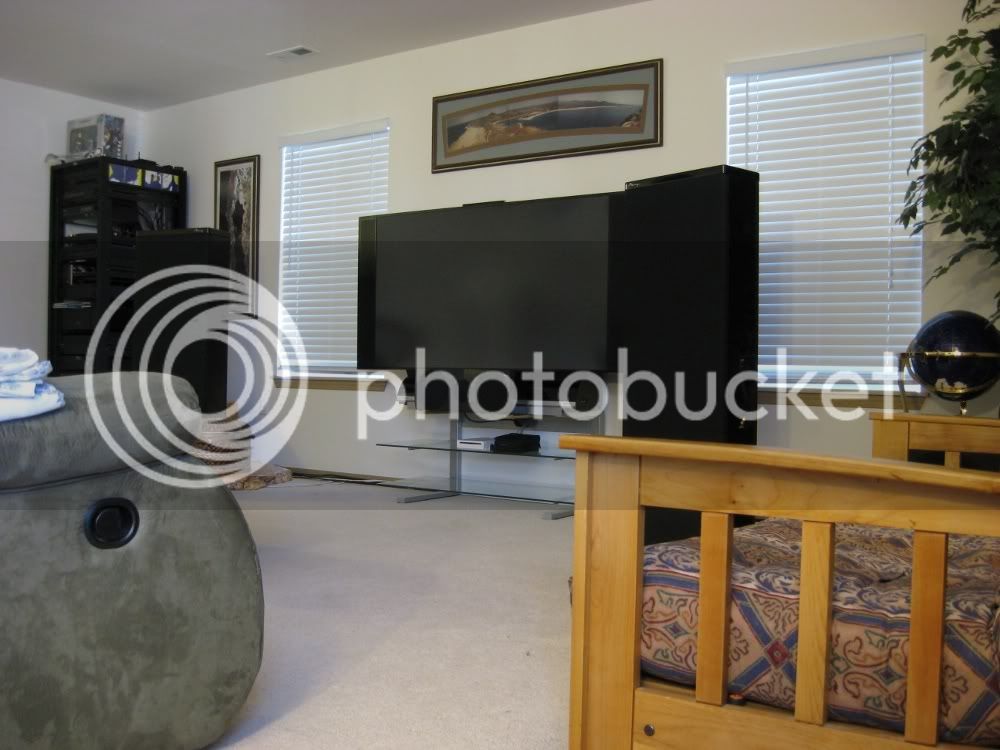 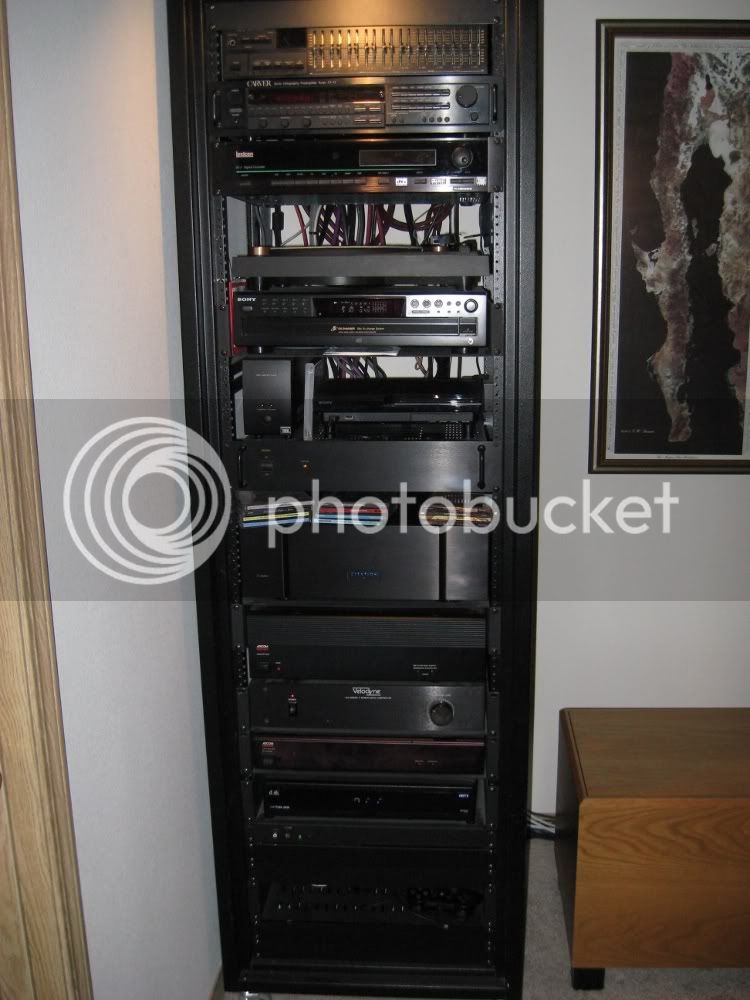 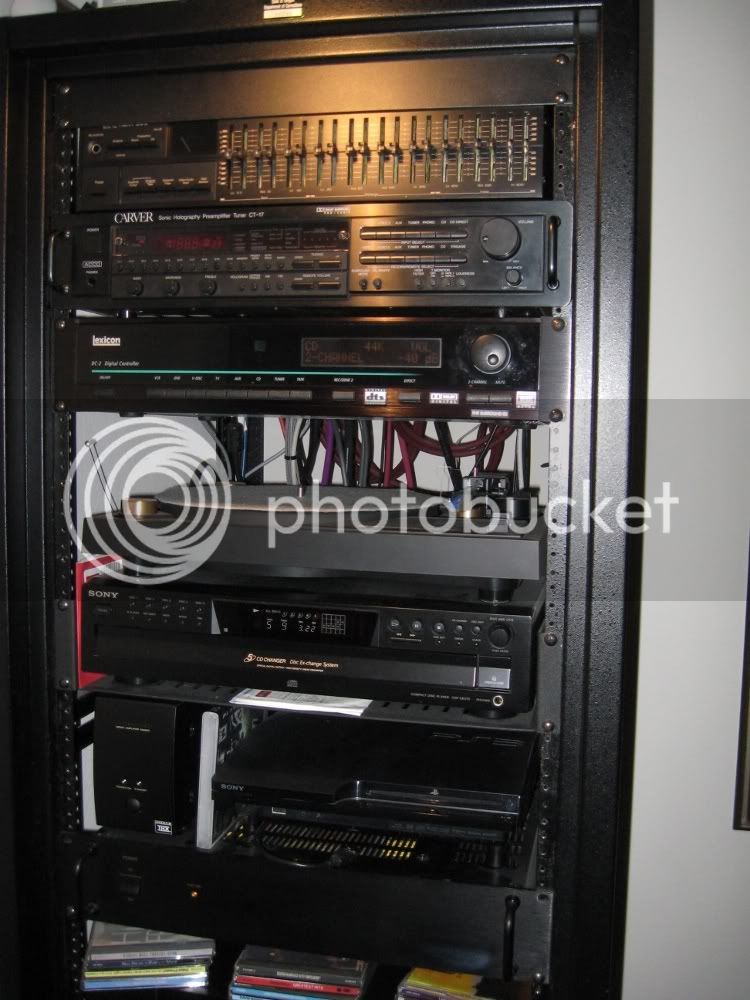 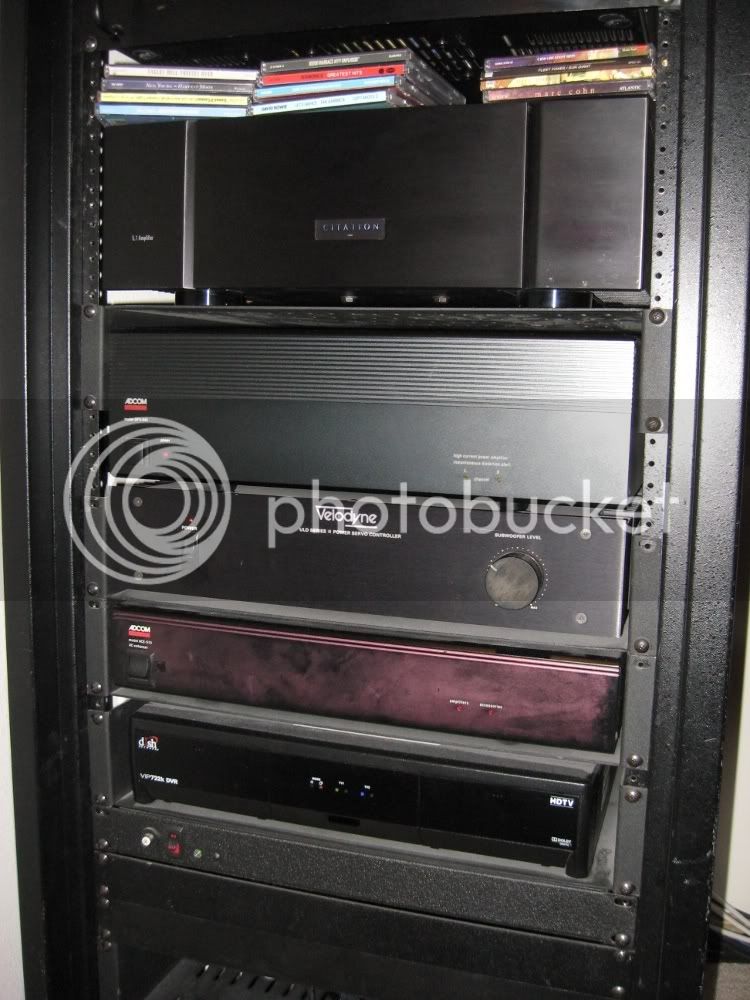 System #2 is in the living room, A surprisingly good sounding little system. The Sony ES & separate DAC, coupled with the Athena S2's really sound nice together. 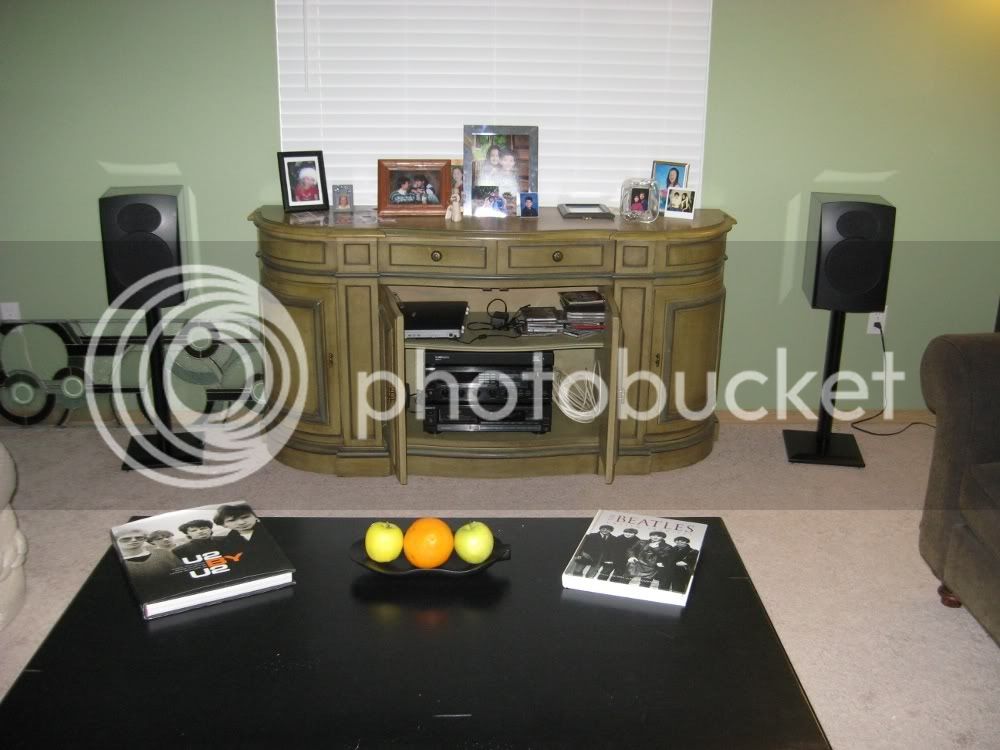 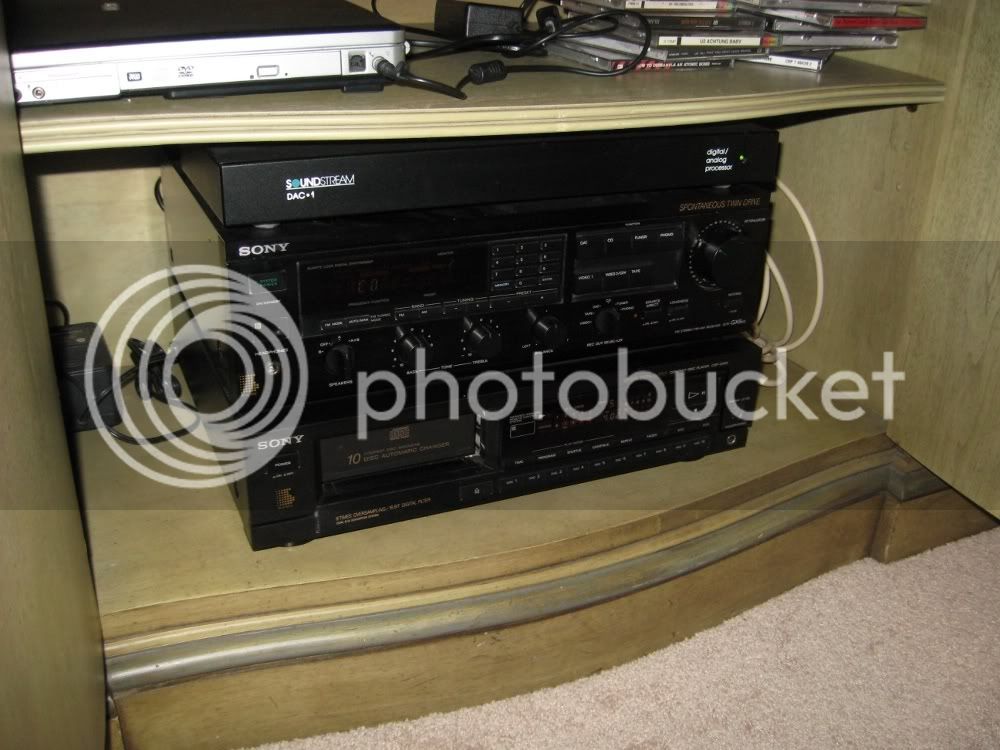 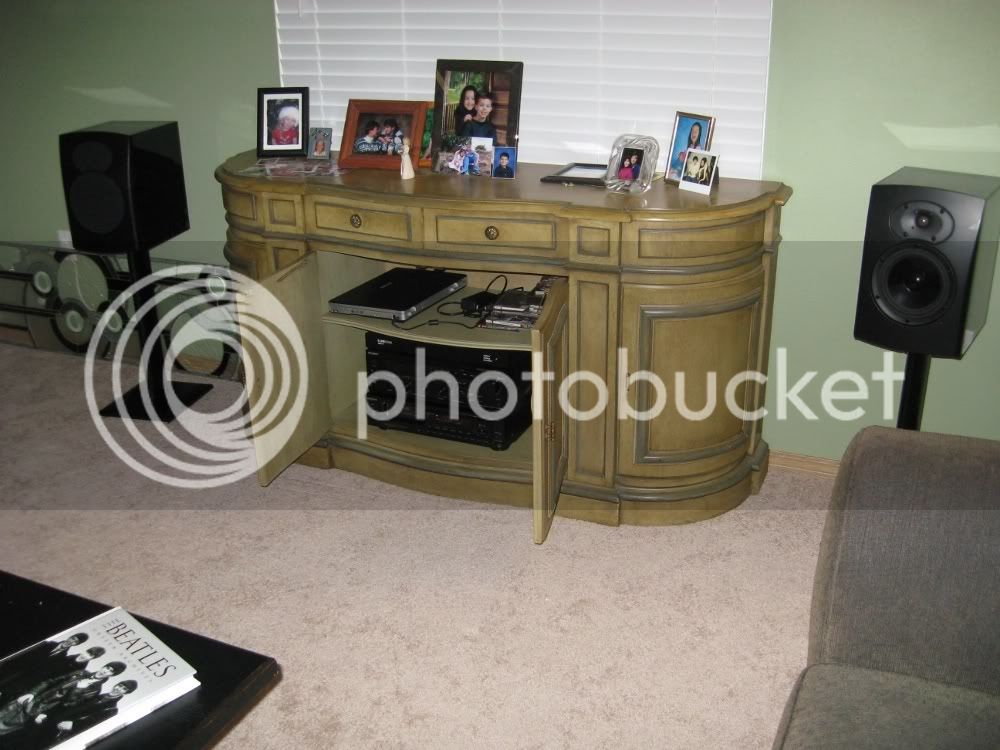 System #3 (so to speak) is basically just a lot of leftover stuff in my bedroom. However the Yamaha RX-V995 is a very nice receiver and running the Athena S1's, NHT VS 1.2 center (or the BIC V52 center I just found at goodwill for $10) sounds good. The onkyo Sub I also found for $10 at goodwill and is a nice little 8" Sub. I think I will be putting the Polk into the br system and maybe running some wire for surround spks. 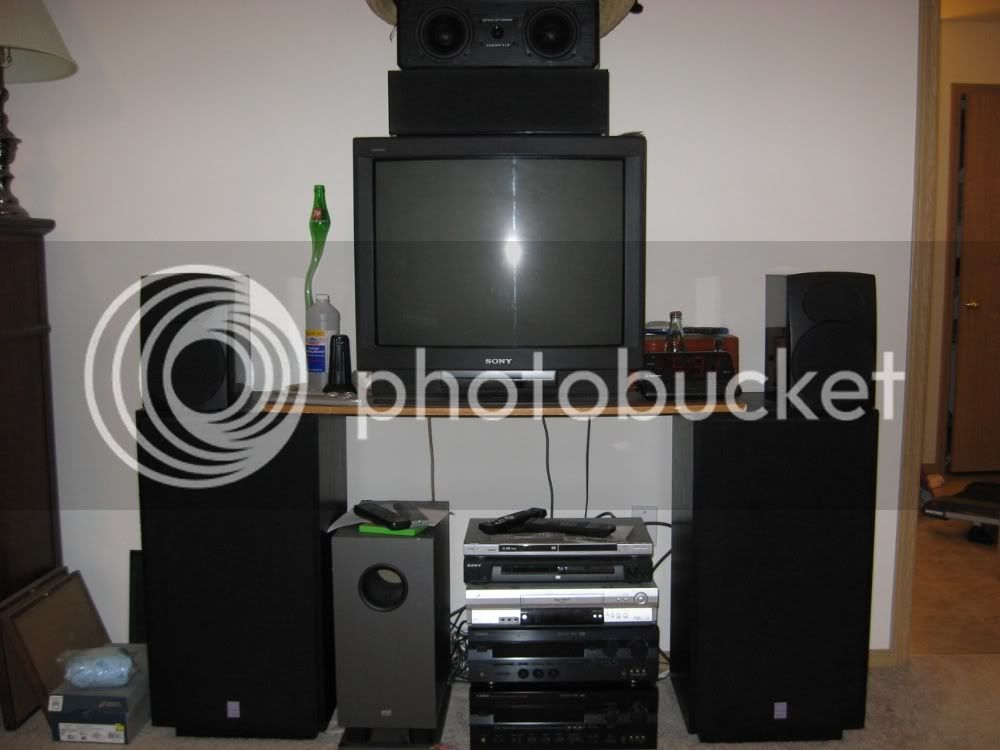 The CW's in the picture aren't being used (other than to hold up the TV) at the moment. I do have them hooked up to a Yamaha RX-V596 I just got for free to test the receiver.
J

Nice Rack. Is that the Mid Atlantic?

I have been considering getting one of these for my system.

gholt said:
Nice Rack. Is that the Mid Atlantic?
Click to expand...

Thanks, actually I got that rack used through work. It came out of a prison in Oregon. But I do like it as well, could use to be repainted, but it is working very well for me.
W

Good to see some thought went into the speaker placement. Too bad a better solution for the center channel is difficult.

Glad you are able to sit back and enjoy it. Tweaking all the time can be fun but sometimes it gets to be too much.

Thanks for sharing and taking time to post some good photos.

westcott said:
Good to see some thought went into the speaker placement. Too bad a better solution for the center channel is difficult.

Glad you are able to sit back and enjoy it. Tweaking all the time can be fun but sometimes it gets to be too much.

Thanks, here is a link to some older pix that show the whole room better. Since then I have moved the M3's farther out from the wall (spent a LOT of time finding perfect placement on those), and moved the Subs and center. Also upgrade some of the equipment in the rack. I actually kind of like what I came up with for the center, need to paint the oak supports for it black though. It fit nicely and doesn't look too bad. I also ran a dedicated 20 amp outlet for the system a few months back.
S

Wow.. some of that stuff i dont even know the names of nor even can begin to know what they all do

Just ran across this thread again and thought I'd update it a bit. My system has gone through a lot of changes in the last 6 years.

I upgraded my Preamp to a Lexicon MC-1 about 5 years ago, then upgraded to an Emotiva UMC-200 for HD audio about 1 year ago. I replaced 3 amps with 1, Adcom GFA 7500. Picked up a 2nd Velodyne ULD 15 Sub w/amp. Got Mirage MCsi center to match M3si mains. Upgraded and wall mounted TV. A few other miscellaneous upgrades. Yes I do have a PS3 on top of a PS4 on top of an XBOX 1. I installed a (virtually) silent fan to keep them cool, and they are separated by about 1/2" with rubber feet.

My system has been a work in progress for well over 20 years, but I feel I am finally just about done upgrading, I love it the way it is I will be adding a 125" automatic projection screen that will come down right in front of the 70" and stop just above the center channel for movies.

The Lexicon mounted above the Emotiva is a bit of an experiment. I am using a Niles AXP-1 to switch to it from the Emotiva, just to run the Citation amp that runs the mains, for CD listening. I like it's sounds for stereo listening more than the Emotiva (I think, both sound great). I know the AXP-1 may degrade the sound some, but it is working well.

These pictures were taken with my cell phone, so not quite as good of quality as one's from 6 years ago.

I still have system #2 as originally pictured. System #3 has been sold off. 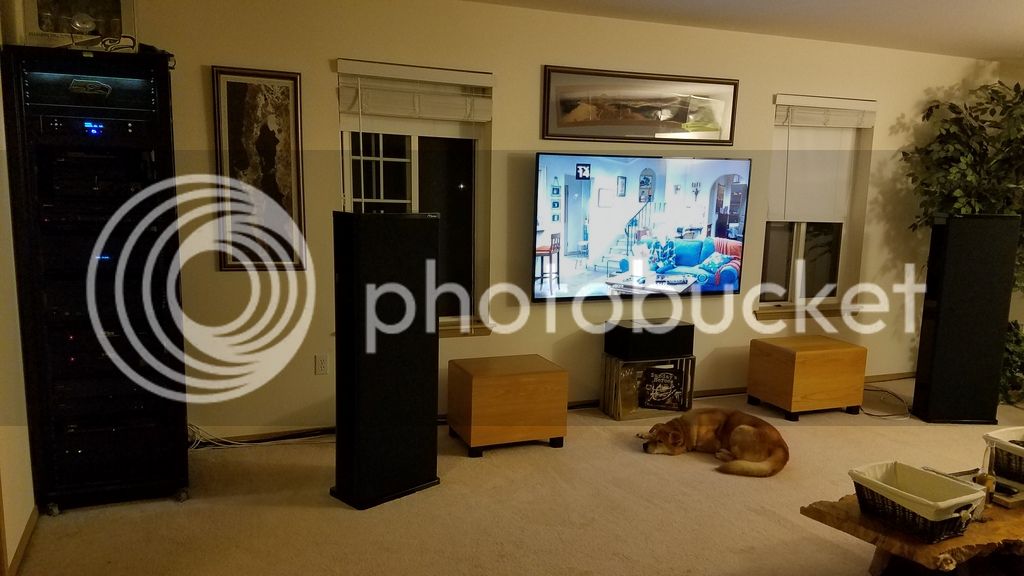 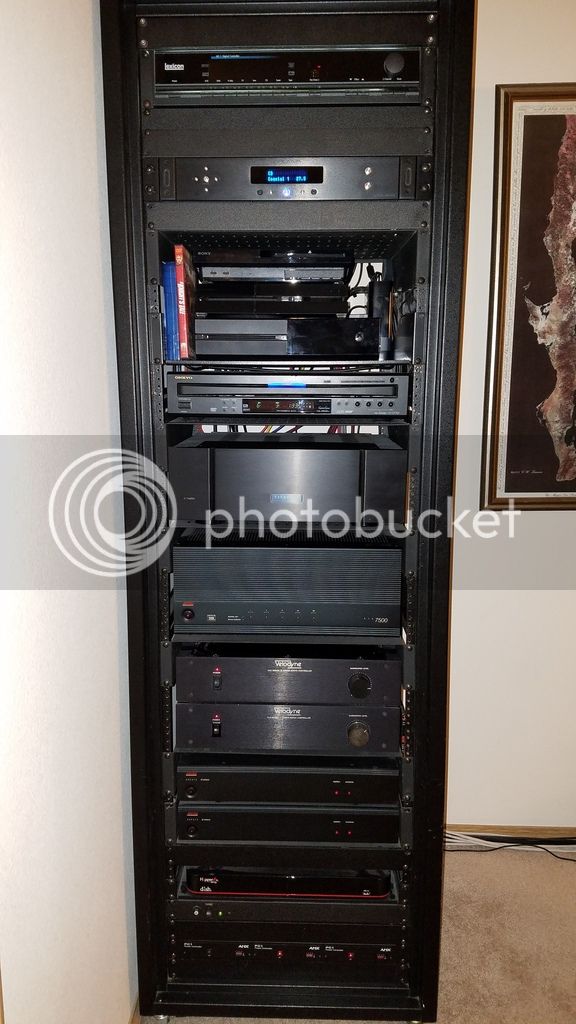