I recently inherited a Marantz NR1200 Receiver from my mother in law. This is a stereo receiver with preouts for mains, as well as subwoofer. The subwoofer preout is managed by an adjustable low pass filter, which I set to 4oHz. At any rate, connecting the preouts to power amplification connected to JBL L100t3's and B380 sub and thereafter syncing the NR1200 to my iPhone I began to appraise the unit listening to familiar Apple Music Playlists on the phone via Airplay in the manner I use my Parasound P6 Preamplifer/DAC connected to same power amps and speakers to listen to Apple Music via an Airport Express.

After just a few seconds of listening I recognized an unexpected detail and crispness from Apple Music downloads, rivaling or surpassing the experience I get from the Parasound. And, now having enjoyed the NR1200 for about a week of continuous play it appears that the detail and crispness is not at all fatiguing.

Now, to the point of this short review, the Marantz sells for about $650 while my Parasound set me back about $1700; thus, I have an immerging impression that the NR1200 might satisfy the budget restricted audiophile very well, even those who seek stereo SACD pleasure, since the receiver has HDMI inputs which accept HDMI output from several Sony UBP Players out there today. 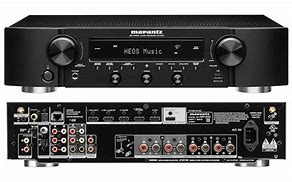