Connecting Bose speakers to a receiver

Thanks for your help.

Doesn't appear that those speakers are avr friendly. Bose stuff usually mixes poorly with standard audio components. What is your goal?
T

Looks like wireless is the goal. Wired bose speakers that will work start at about the Acoustimass 10 Series III with speaker wires that connect to an AVR and a bass module with LFE input.

It is almost shameful in this day and age that there isn't a standard for wireless surround speakers and subwoofers that is integrated into many receivers already. It really does blow me away considering how Bluetooth is built into so many things for next to nothing. WiSA is a nice concept, but it is outrageously expensive at this point. If it could become ubiquitous across the industry and start showing up more often in products at a reasonable price, then these types of questions would have a much better answer. It would also solve a lot of problems which people have run into for years.
S

How To Use Bose Speakers With Other Receivers | BoomSpeaker
S

I was also thinking about getting the Bose soundbar 300 with the bose surround wireless speakers (model :809281-1100) and connect the soundbar to my receiver. I've heard it's possible with an optical cable.
T

Putting together a Bose system can get pricey. I agree about more receivers accommodating wireless connections. Yamahas now can use wireless MusicCast speakers as surrounds. Have you looked at packages from Polk? These types of systems take an AVR out of the loop so one has to decide how many devices they are going to need if they go through the TV as opposed to a receiver. So, convenience of wireless and loss of sound quality and multitude of inputs, or improved audio performance and more inputs with lots of wires. Wireless connections with AVRs just isn’t really there yet. It can be done, but it only takes speaker wire out of the loop and power cords and transmitters will replace them.

How To Use Bose Speakers With Other Receivers | BoomSpeaker
Click to expand...

This article refers to wired bose speakers with proprietary connectors. Some of the Acoustimass systems allowed for wiring to receivers without any conversion or adaptors.

There are much better choices than overpriced Bose
S

Epsonfan said:
There are much better choices than overpriced Bose
Click to expand...

Well actually I was only planning to buy some Bose speakers on next Black Friday...

Serge2019 said:
Well actually I was only planning to buy some Bose speakers on next Black Friday...
Click to expand...

Bose is really dreadful unreliable gear. Going for Bose at any price, is about the worst choice you can make.
S

Trebdp83 said:
This article refers to wired bose speakers with proprietary connectors. Some of the Acoustimass systems allowed for wiring to receivers without any conversion or adaptors.
Click to expand...

Ok! So do you know if the Bose surround speakers and subwoofer I'm talking about have the same type of connection. I never had the opportunity to look at them in a store. What I like is that there are very small and I live in a studio apartment and not enough space especially with all my wife's stuff....
S

TLS Guy said:
Bose is really dreadful unreliable gear. Going for Bose at any price, is about the worst choice you can make.
Click to expand...

Have you tried any of their speakers before?

Serge2019 said:
Have you tried any of their speakers before?
Click to expand...

I have tried them personally no. I would never let such ghastly non standard contraptions in my house. As you are finding, everything Bose is proprietary and they design their stuff not to work with anything else by malintent.

I have heard them, and they are awful, with the bass modules being particularly egregious. I have been called to friends houses over the years, when the stuff blows up, which in my experience is the rule more often that not. To add insult to injury Bose gear is unfixable!

Save yourself a headache and walk in the other direction from this way overpriced junk.
T

Bose are not held in high regard around here. They aren't exactly transparent with their specs and few of their setups can be connected to other devices but those who use them quite like them and usually use them for a long time. Unfortunately, the wireless surround speakers and subs from any brand are made to connect to their own brand of soundbars and those soundbars have their own processing and amps and are not designed to use with AVRs. They are designed for a direct connection to a TV using an optical cable or HDMI cable using the ARC/eARC feature. Off the top of my head, I think only Yamaha MusicCast capable receivers can be connected to wireless MusicCast subs and speakers to make wireless subwoofer and surround connections. So, if wires are not the issue, you could connect, say a Bose Acoustimass 10 Series III, IV or V to the Pioneer receiver using the included cables. But, their wireless speakers will only work with their soundbars.

I picked up a Bose Soundbar 500 and Bass Module 500 for $125 from this lovely elderly woman. I did an A/B comparison with the same source material, in the same room against my 2.1 dedicated music setup (it cowered in shame when compared to my 5.4.4 obviously) and the difference between a pair of Martin Logan Motion 15’s and a single Mirage Omni S12 subwoofer was night and day. The clarity, more specifically the midrange and higher end of the midrange was too muddy so to speak with the Bose and it doesn’t do much below 40-50hz besides make horrible sounds. I played back a few scenes from Lone Survivor and the results repeated themselves. I bought it solely to resell it on eBay for profit but was curious about its quality. If I have a chance before it sells I’m going to measure it with REW. Overall, horrible piece of equipment.

OK, enough Bose bashing and time for some help.

What you need are amplified speakers and a wireless transmitter receiver (T/R). There are some inexpensive T/R on amazon but I can't vouch for their quality. For something known to work well, SVS carries a good T/R that works with both their subs and regular speakers. Full specs on that web site. You'll need one for each channel.

There are various options for powered speakers but not likely something you'll find on a Black Friday sale. Would help to know where you plan to shop. Powered speakers are typically heavier due to the internal amps so keep in mind on how you can mount them, whether wall mounting is an option or you need a shelf. Wireless does not mean cable free. You still need to plug each surround into a power outlet. If the speaker has a USB port, you can power the SVS T/R from the USB port, otherwise you will need two power outlets, one for the speaker and one for the receiver.

This is why wireless is not always ideal. Sometimes it's easier (and cheaper) to use wired speakers. You can find small surrounds on Black Friday and wire can be run along baseboards and around door frames. There are rubber cable covers if you need to traverse the floor. Just buy some 14 gauge speaker wire in bulk. You might get away with 16 gauge but for a long cable run for surrounds the heavier gauge is preferred.

It is time to review the Bose difficulty.

Anyone who has designed loudspeakers has doodled with the idea of a system built round small speakers. However the laws of physics beat you every time.

The problems. Small speakers exist that have a good midband and high end response. However, even a small speaker in a ported box, has a box too big.

So sealed box becomes the only solution. Then you have far too high an F3 to blend with an unobtrusive sub, placed on an optimal position.

So that means you have to use two subs with the speakers on top. So you might just as well have made a two way speakers in the first place.

Now for small subs, you have two options, a small driver with very long throw, in a sealed enclosure , with lots of power and Eq. That is the approach of the Sunfire sub, designed by Bob Carver. For its size actually not a bad sub. Bob did have to tame it though, as early prototypes created a sonic boom!

The problem remains though, if used with a small speaker both speaker and sub would have to be in proximity, due to localization issues.

The other option for a small sub, is the coupled cavity approach, used by Bose. These have fallen out of favor for HT as a good one will not reach the 120 Hz required for the LFE signal. The problem is that you can have a nice low Q sub with a narrow bandwidth, or a sloppy high Q sub with a wide bandwidth. You can not have both!

So about an octave and half is about as far as you can stretch it. Bose goes way beyond that an still leaves a nasty gap between the bass module and satellites.

This is the typical Bose FR, which I'm sure many of you have seen before. 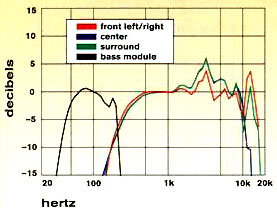 So in addition to the bass module not splicing with the satellites, even their small speakers are not very good. You can see that cone break up is occurring as early as 1200 Hz. There are far, far better small drivers around. It has been rumored for years that Bose will only spend around $2.0 dollars each for those drivers, and I can believe it.

So it is not a good system. It is designed to snare those who put form way above function.
T

“Wireless” is a misnomer for speakers. Pick your poison, speaker wire or a power cord.